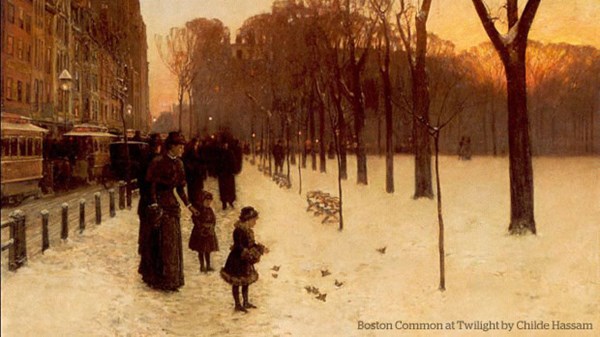 Boston at Christmas: Beauty, History, and That New England Frankness

I'm grateful for the way my city has nourished my art and imagination.
Bruce Herman

There is a wonderful painting by the 19th-century American artist Childe Hassam titled "Boston Common at Twilight" (above)—a wintry scene that is nevertheless warm and inviting, with golden backlighting and gaslights twinkling-on at the end of the day; its street cars and formally attired people feeding the hungry wintering birds.

Hassam's vision of Boston mirrors my own feeling about the place, with its patina of history and beautiful architecture, its gardens and green spaces and its great institutions. Having lived in the city for nearly a decade, and in its nearby orbit in Gloucester for another 30 years or more, I love the place and consider it to be my home.

As most people know, Boston was founded only 10 years after the Plymouth landing of 1620, and was birthplace to many of the founding figures in American history (as well as home to the original "Tea Party" and the beginning of the American War of Independence in 1776).

Boston is a unique place in so many ways—but chiefly, to my mind, because of its educational, medical, and artistic institutions, some of the best and most time-honored in the land. Boston has five world-class art museums, among them the MFA, the Isabella Stewart Gardiner, the Fogg and Sackler museums at Harvard, and the Institute of Contemporary Art. These institutions as well as the city itself—a wonderful classroom and museum all its own—have nourished me for most of my adult life, and all my professional life.

Forty years ago, as a young artist looking for training, I moved to Boston and enrolled in art school. I slowly gained knowledge of this place and its history, and I grew to love the particular feel of its winding streets, the great Charles River dividing Boston from Cambridge, and the lovely architecture that echoes its European ancestry. I found the relatively quiet pace and tenor of city life here to be hospitable to my particular artistic dreams, which included attempting to make art that evokes a contemplative space and time.

At this time of year, as we move toward year's end and enter Advent once more, I find myself filled with gratitude to the founders of our nation and for the sacrificial way Bostonians over the centuries have attempted to provide the best in art and education for our citizens and visitors from around the world. I hope Christianity Today's readers can find their way here and experience firsthand the New England spirit, so perfectly expressed by one of its most famous residents, Emily Dickinson:

And the citizens of Boston are in fact truth-tellers, as my early experiences here proved. When I first moved here from South Carolina, I was initially shocked by New Englanders' forthrightness and even apparent rudeness. I have come over the years to treasure the honesty and "what you see is what you get" spirit.

I never have to guess where I stand in New England.

Like the great granite boulders here, left behind by glaciers more than 20,000 years ago, New Englanders are sturdy and immovable (and a little hard!)—which explains why they led us to independence from our colonial masters in 1776. I count myself blessed to dwell here among the rocks and rivers; the ocean and ancient hills, upon several of which Boston is built. As Massachusetts Bay Colony governor John Winthrop wrote in 1628, we are meant to become "a model of Christian charity and a city upon a hill."

Bruce Herman is a painter and professor of art at Gordon College, where he is currently Lothlorien Distinguished Chair in the Fine Arts.

Boston at Christmas: Beauty, History, and That New England Frankness