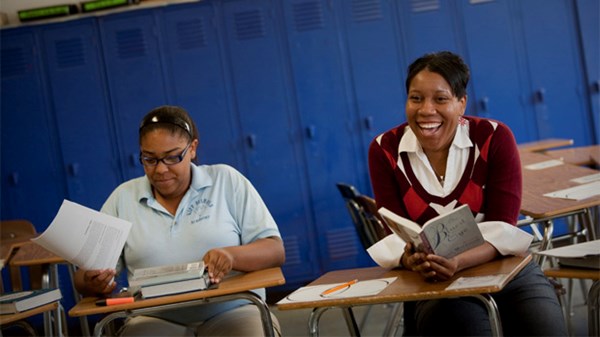 Memphis Teacher Residency tells residents to witness to Christ by teaching with excellence—and by committing to Memphis for the long haul.
Monica Selby

In the basement of a church in the heart of Memphis, Tennessee, a group of Christians believes public education in American cities does not have to continue as is. They are not activists or government officials. Nor are they protestors or reformers in the traditional sense of the word. They are teachers and those training them.

And they believe that "urban education is the single greatest social justice and civil rights issue in America today."

Such is the belief driving Memphis Teacher Residency (MTR), a nonprofit that trains quality teachers for the Memphis City School system. In a city with over a thousand churches yet where more than half of the children live in a neighborhood characterized by poverty, founder and director David Montague and his team realize there is much work to be done.

Through MTR, teachers in training from across the country move to Memphis for an intensive one-year residency. In addition to classes and seminars, residents are paired with a teacher-mentor in a Memphis classroom. At the end of the year, residents have earned a Masters of Arts in urban education through nearby Union University and a Tennessee state teaching license. In return, the residents teach in an underserved school in Memphis for at least three years.

Montague, who served with Campus Crusade in East Asia before founding MTR in 2009, says the most evangelistic thing a Christian teacher can do is shut the classroom door and never speak of Jesus. Rather, he believes, they should be the best English, math, and science teachers the kids have ever had, and let the light of the gospel shine through their professional lives. Montague puts it this way:

"Public education is a promise by the government to every child in America that you can get a quality and free education at your local school …. For a child to get a great education, they have to do that within a healthy and safe environment. If you're a Christian and you're using your classroom as a means of sharing the gospel, you have just destroyed the healthy and safe learning environment for any child in your class that is Hindu, or Muslim, or Jewish, or atheist."

Training teachers in urban education is MTR's main goal. However, unlike other teacher-training organizations, MTR staff realize that a great teacher is only part of the answer. When they leave the school building, students return to the cycle of poverty, drugs, and violence. One teacher in one classroom for one year can only do so much.

Thus, from the beginning, MTR chose to focus on four Memphis neighborhoods known for failing schools and high crime rates. Each MTR resident is strongly encouraged to take a job at one of the 15 schools in the four neighborhoods. With well-trained, caring teachers filling up the schools, a child is more likely to have a consistently positive experience in the classroom.

"We're only willing to do education reform within a community development approach," says Montague, "so that a child can be born in [a given neighborhood] and have a great teacher from kindergarten all the way through 12th grade."

Resident Kevin Mattice, a transplant from Ohio, says that during his months at MTR, he's learned "the power of being there for the kids and them knowing what they can expect from their teacher, the power of staying in a city for more than a year or two, and in a new way."

With this goal in mind, Montague, brother Robert, and Drew Sippel, executive director of Cornerstone, a Memphis preparatory school, identified public sectors they consider key to revitalizing a community: education, youth, housing, and health. With information from public-education nonprofit Strive Initiative in Cincinnati, they considered statistics like test scores, graduation rates, crime rates, teenage pregnancy, and HIV rates, creating a metric to measure what a Memphis neighborhood growing toward health looks like.

Practically, this means that several organizations work together in one neighborhood. Two or three tackle education from early childhood through graduation. Other organizations provide youth programs, mentoring, and job training to teenagers. Perhaps two more work on improving housing conditions and removing blight. Finally, at least one organization monitors the health of the neighborhood, providing free or cheap care to residents. As the neighborhoods begin to improve, neighbors begin to know each other, to look out for each other, and to care about their neighborhoods again. And, more importantly, they are empowered to make their own changes.

Jonathan McIntosh, pastor at Memphis's Christ City Church, regularly notes that his city "has more churches than gas stations." Yet Memphis is also on many lists of highest crime rates, lowest test scores, and worst places to live. Montague and the Memphis Teachers Residency have found a way to begin changing that. And Montague insists it comes from passionately following Jesus Christ.

"You find out what God loves and what he hates through his Word, and those loves and those hates: you take them on as your own. God loves justices, and he hates injustice."

Monica Selby lives with her husband, three boys, and one cat in Memphis, Tennessee. A member of the Redbud Writers Guild, she blogs at In the Whisper.