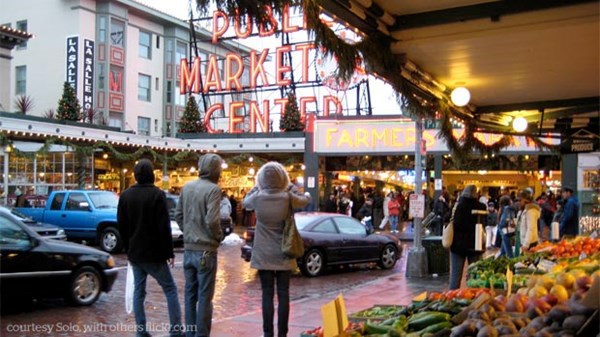 Taste and See That Seattle Is Good—Especially at Christmastime

The bounties of the earth and the best of human creativity direct me to the Maker of all.
Anne M. Doe Overstreet

Today, there is a community forum to discuss handling urban wildlife efficiently and humanely. "O Holy Night" plays over the speakers. A Santa in glossy black boots joins the crowd, gloved thumbs tucked into his belt. This is so Seattle—a surreal juxtaposition of religion, cultural mythology, and environmental concerns.

Last year I slipped away to The Great Figgy Pudding Corner Caroling Contest at Westlake Center, weaving through a whirl of velvet top hats, reindeer antlers, and elves in striped tights. It's one of the rare times when I enjoy a crowd, shouldering up to strangers to hear carolers in Starbucks' aprons or Dickensian great coats, singing both the sacred and profane. While it's true that the former is sometimes overwhelmed by the latter, there is jubilance in the air. The tide of over 9,000 bodies sweeps me past the gilt and glittering carousel. I stall on a side street and gaze up, past store displays, at the walruses and bas-relief winged lions that embellish the architecture's strong verticals.

This is as urban as I have ever been. I grew up in smaller towns where cranberry and popcorn strings adorned the trees. Luminarias lined walkways, a common candle nested in sand, cradled in a bag, paper crackling in a light wind.

There is history for me here, now, among Seattle's seven hills. Jeff and I have clambered the stone stairways and cobbled streets of upper Queen Anne to reach Kerry Park. This pocket-sized jewel of greenery hangs at the neighborhood's edge, providing the best view of the Space Needle, its slender trunk topped by strands of lights, an art deco tannenbaum.

Taste and See That Seattle Is Good—Especially at Christmastime