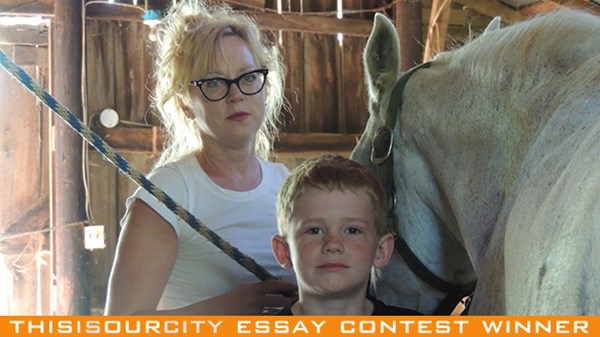 It hasn't always been so seamless. The rural South can be a hard place for outsiders to break into, especially outsiders from the North.

After we'd been here a year or two, I saw a farmer haying the field next to ours. I stopped him on his way out, hoping to buy some bales from him. After I waved him down, he stopped his truck and rolled down his window.

"Excuse me, sir," I said. "Are you interested in selling any of that hay?"

He narrowed his eyes a bit and peered at me. "Ah yew that Yankee guhl?" he asked.

It was a small test. But it would have been an easy one to fail. Instead, I chose not to take offense. "Yes, sir, I am. And I'm looking for some hay."

He looked at me for a few seconds. "Alright, then," he said. Then he gave me his phone number.

There were other awkward neighbor moments birthed by the Mason–Dixon divide. One time I knocked on the door of our neighbor across the street to bring over a piece of misdelivered mail. She thanked me and said, "Why don't you come on in?" I hadn't planned to come on in. I didn't want to come on in. But I wanted to be a good neighbor, so I did. We just stood there for a few moments. Finally, she asked if I wanted to look at their Christmas tree. That seemed better than standing around, so I did, and then made my exit as quickly as possible.

It wasn't until another neighbor asked me to "come on in" while I had a lunging dog on a leash and she had a yapping dog on the other side of a flimsy screen door that I realized what was going on. When people in the South ask you to come in, they aren't really asking you to come in. They are being polite. Kind of like asking, "How are you?" when you don't really care to know. In the North, we don't even bother with being polite, hence my confusion.

Thank you, Karen! It can take time but is so worth it, this neighborliness.When my husband and I moved into a small house in Madison with two small children, our first encounters with the gruff, chain-smoking widow next door were anything but friendly. Our children, used to university housing, were oblivious to lot lines. She took them very seriously. Over the years we became, if not friendly, certainly cordial. But one summer, when we were just too busy to keep up the lawn, she took it upon herself to mow ours as well as hers, not once, but three times. I read it as judgement and begged her not to do it-how can you let a 75 year old widow mow your lawn? The first time, I brought over a six-pack of her favorite beer, the second time a loaf of homemade bread, each time begging her not to mow, promising we would get to it. The third time I ran out when I heard the mower, pleading with her that we truly would get it done. Her response? "How else do you tell neighbors you love 'em?"