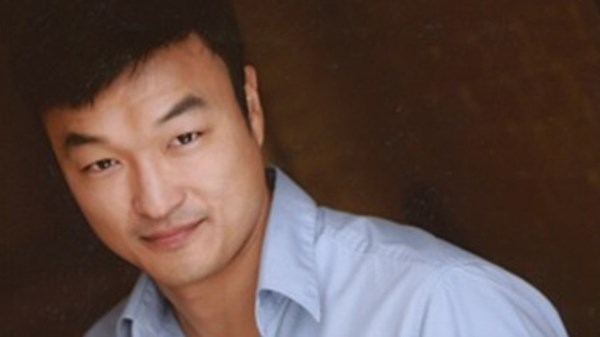 "There's power in humor. When people laugh, it means they've understood something and you've made a connection," says Ins Choi, Toronto actor and playwright. Choi's debut play, Kim's Convenience, is sobered by intergenerational conflict, but it is also uproariously funny, not least because Mr. Kim, a belligerent and bull-headed Korean father, takes center stage.

In the play, which is loosely based on the story of the Prodigal Son, "Appa" runs the family convenience store in Toronto's gentrifying Regent Park neighborhood. A larger-than-life character and vociferously anti-Japanese, Mr. Kim has added the Toronto police to his speed dial should he spot a Honda illegally parked in front of the store.

"I solifidied Appa early on," says Choi, whose own family moved from Korea to Toronto when he was a baby. "I knew his voice, I knew him through all the male Korean influences in my life: my dad, my uncles, men at church."

Korean churches and convenience stores are landmarks of an era of Toronto's recent history, marking decades of Korean immigration to Canada. But Kim's Convenience chronicles what may soon be a lost story: as areas like Regent Park revitalize, these churches and variety stores are ceding their place to condo highrises and big-box retailers.

Kim's Convenience garnered immediate attention in Toronto when it entered, and won, the contest for Best New Play at Toronto's Fringe Festival in 2011. After its sell-out run at the Toronto Fringe in July 2012, it was picked up by Soulpepper Theatre Company, which has re-extended the show several times and plans to launch its first national tour in January 2013.

Toronto's Korean community has received the play warmly as well. One family made a three-hour trek to Toronto at the suggestion of friends, who told them to "close the store and come see this play; it's about us." But one doesn't have to be Korean--or an immigrant--to appreciate a story that rings so familiar. Writes Soulpepper artistic director, Albert Schultz, "The magic depth to which [Choi] has taken this specificity is the same depth from which the play's universality is sprung. This play, on hearing, becomes our story about our family in our community."

Despite the attention given to Choi and his play, one part of the story has yet to be told: The play may owe one of its biggest debt to Choi's church, Grace Toronto. Calling itself "a church for the city in the city," in highly secular Toronto, the church pledged the rehearsal space and financial support for a weeklong workshop in 2009. With Grace Toronto dollars, Choi hired professional actors to rehearse the script and stage a public reading of the play, a process that proved critical to revising the script and no doubt contributed to its success.

Dan MacDonald, senior pastor at Grace Toronto, explains how the church has always intended to engage the arts: "We want to be a place that celebrates, appreciates, and helps catalyze great art."

But, "the call to an arts ministry isn't necessarily a mission for every church," clarifies Ian Cusson. As Grace Toronto's director of worship and arts, Cusson understands why some Christians question the church's financial support of the arts. "Every church must care for the widow and the orphan and the poor. But it just so happens that in Toronto, we also have a significant artist population. We feel called to care for them."

Even with its modest budget, Grace Toronto's arts ministry hosts events meant to generate conversation among artists and art patrons both inside and outside the church. For example, after a performance of Kim's Convenience at the 2012 Toronto Fringe, the church hosted a reception at a local pub with Choi and the cast. Such events aren't covert evangelistic operations, says Cusson. "We want to build relationships and let artists know that they are made in the image of God and that their work reflects our creative God."

If Grace Toronto challenges conventional assumptions about the priorities of church, Ins Choi himself also proves iconoclastic. Did God prompt him to write Kim's Convenience? Choi answers with a firm no. "That [implies] that artists are a conduit, that we could channel God's artistic inspiration. There are saints, artists throughout history who do say that. But most of what I do is hard work," explains Choi. "It's a lot of perspiration."

Choi admits his chagrin when Christian artists defend their work with allusions to divine inspiration. "At the end of the day, art has to stand on its own. If the work we produce is excellent, someone's bound to ask, 'Wow, How did you do that?' " When we're artistically credible, Choi says, the world begins its conversations with us.

A Gospel Project: Theatre to Bless the City

Whether a play is or is not explicit with the gospel, Grace Toronto and Ins Choi would agree that good theater it itself blesses a community. At its best, says Choi, "[theater] makes people laugh, makes them cry, and makes them see something in themselves that they were blind to."

Blessing one city's through artistic endeavors is not unlike other vocational calls, Choi suggests. "It's like teaching, plumbing, and building good furniture. [We should] make lamps that work, that are aesthetically pleasing, and that serve the common good."

As a measure of its excellence, Choi insists that theater should convey what is true about life. But he would also argue that Christians in theater have another distinctive role: to imagine redemptive possibilities for a broken world. In Kim's Convenience, for example, though Appa had severed ties with his son 20 years earlier after his son had stolen money from the store, the play "shows a different path than revenge. It shows that reconciliation is possible," says Choi.

For all Choi's cool confidence about the priorities and purposes of art, he has faced doubts about the artistic life. Early in his career, he wondered if other jobs--those with steady employment and financial security--weren't a better, wiser choice for supporting his family. He was almost talked into that life by a policeman friend, who was a uniformed argument for stability and security.

Fortunately, Choi couldn't be persuaded. As Soulpepper's Schultz says, "Ten years from now there will be a new generation of first- and second-generation Canadians who will know, with confidence, that they can make a meaningful contribution to the well-being of their community without a uniform and a gun."

When Torontonians left Kim's Convenience, says Grace Toronto's MacDonald, they left "thinking through their own family, spirituality, and connection to the city.

"Very few people can say that 80 minutes of their lives did that."

Jen Pollock Michel, based in Toronto, writes at FindingMyPulse.com and Her.meneutics.