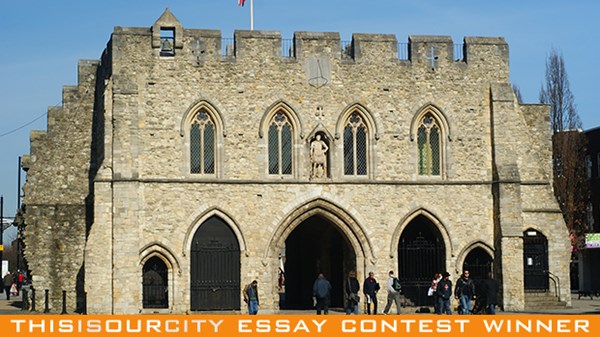 It is supposedly the place where King Canute stood and futilely ordered the sea to retreat. It's certainly the place King Henry V set sail from to reach the Battle of Agincourt. The gate through which the troops marched stands in a forgotten corner of the city. It is the place where the Titanic set sail. On that fateful voyage, 549 people from this city lost their lives.

Illustrious history mixed with patches of ignominy. Sacked by the French in the 14th century, walls restored and strengthened, never again breached. Struck by the plague soon after and again, 300 years later. A city defined by fears of invasion as well as the prospect of prosperity brought through its docks. Its proximity to the sea and other countries both a virtue and a threat.

It's also where I grew up. Several years ago, the leaders of Southampton, on the south coast of England 70 miles out of London, adopted a vision statement: Southampton would be a city that is "good to grow up in and good to grow old in." A few years before, Eugene Peterson had used similar language to interpret Zechariah's ancient words: "Old men and old women will come back to Jerusalem, sit on benches on the streets and spin tales, move around safely with their canes—a good city to grow old in. And boys and girls will fill the public parks, laughing and playing—a good city to grow up in."

Praying on the City Walls

Around the time the City Council was unintentionally borrowing from the Old Testament, I stood on the city walls. Every other Wednesday night at midnight, a small group of us met here to pray. We looked out over the developments rising from land reclaimed from the sea. We looked down to see revellers staggering from bar to bar, and the homeless man shrunk beneath a park bench. On one occasion, a larger group gathered—too many for our regular perch—so we moved in front of the main city gate. There we knelt. And we prayed. We prayed for our families, for our friends, but most of all, for our city.

Christian businessmen and women started to ask what they can do to create jobs. There is the scandal of private fostering companies making money out of the lack of families able to provide a home for some of the city's most vulnerable children. Because the local council cannot find enough families for children in care they pay private companies, at a very inflated rate, to find these places. The city needs 40 more families, and the churches have committed to find them—at last count 39 families from churches in the city have stepped up and applied to become carers. If they make it they'll save the city £1.2 million by doing away with the need for private foster agencies.

Council budget cuts will mean all the youth workers employed by the city will lose their jobs, and children's centres are under threat. An audit of churches discovered that between them there were 17 paid youth workers across the city and 37 mother and toddler groups. The church has resources and opportunities to serve both their own members and the communities around them.

For many years, UK Christians have worried about the tide of secularism. They have worried that their beliefs are being squeezed out of public life. We have also had the call for Christians to run for office, take up positions of influence, and be a bulwark against this tide. And like Canute was mocked for his failure to roll back the waves, they have been judged for not doing enough to protect Christian values. From the sidelines, we have worried that our beliefs are being marginalised.

Southampton is just one example of churches across the UK bucking this trend. Behind the scenes and beyond the glare of newspaper headlines, churches are working for the good of their communities. And when they seek to work with local authorities, they are not turned away because of their beliefs but often welcomed as key partners. When church leaders met with Southampton City Council to discuss the issues facing the city, across the table from them sat the Head of Strategy for children's services, the Head of Parenting, and the lead councillor, all Christians, along with a couple of others. At the time when the city needs the most help, the church is there to respond. To respond as congregations of believers and respond as individual Christians committed to finding ways to resolve some of the communities' most intractable problems.

Christians are not excluded, they are welcomed. And when relationships are built, when credibility is established, when fears are dispelled and suspicions counted void, the church is there to serve the people of Southampton. When political tides turn, when programs are cut, when funding dries up, the church is committed to make it a city that is good to grow up in, and good to grow old in.

Danny Webster works for the UK Evangelical Alliance on political issues and helping Christians engage in public life. He tweets @danny_webster and writes on an eclectic range of issues, from relationships and church culture to politics and theology, on his blog, Broken Cameras & Gustav Klimt.