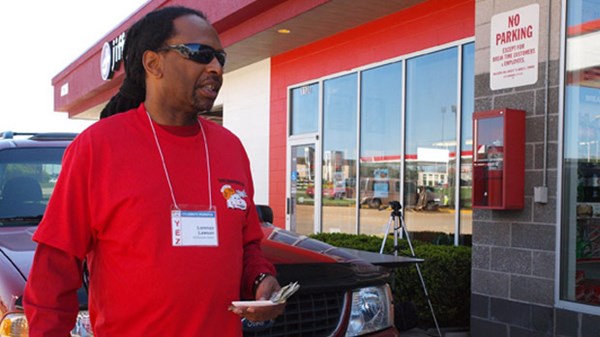 "You can't really be mad at someone who says, 'Well, let's join hands and pray about that,' " Green said. "It takes all the wind out of people's sails."

The center Lawson organized was an office set up as a one-stop shop for more than 250 evacuees from Hurricanes Katrina and Rita who needed assistance. Here, people could fill out a simple assessment detailing their needs, and then they were directed to booths where social service agencies were on-site. The office was set up like a living room with a greeter and some coffee—a stark contrast from most agencies' dull waiting room.

"I wanted to make sure they were welcomed and really treated like they should be, with dignity and respect," Lawson said.

Realizing that normal office hours wouldn't be enough, Lawson pushed to keep the Disaster Recovery Center open from 7 a.m. to 7 p.m., seven days a week, often putting in 90 hours a week. The city later recognized his efforts with the Columbia Values Diversity Award in 2006.

Green had nominated him. "He was the finest kind of demonstration of what it means to be a Christian, to bring people together, to be a peacemaker, to find out what people's needs are and get their needs met," Green said.

An Advocate for Youth

Hurricane Katrina wasn't the first time Lawson's peacemaking skills were called upon. In 2004, a shooting outside the Columbia Mall—widely considered a safe location—awakened Columbia to youth violence. The First Ward council representative called a series of town hall meetings, and Lawson stepped up to help organize the meetings and do further research, visiting neighborhood hangouts and surveying African American youth. The majority said they needed good jobs so they wouldn't resort to crime.

Soon the Boone County Community Partnership put Lawson and fellow activist Nathan Stephens in charge of a pilot youth employment project. That summer, 42 at-risk youth were able to get jobs through the program, but only 20 percent kept them for longer than 30 days.

Saint Cyril of Jerusalem (313-350), Bishop of Jerusalem, Doctor of the Church Catechesis before baptism, no.1 (trad. Migne 1993, p. 36 rev.) "Leaving everything behind, he got up and followed him": Lent leads to baptism You are catechumens, those who are preparing for baptism, disciples of the New Covenant and sharers in Christ's mysteries. Already - now by your call and soon also by grace - you have been made «a new heart and a new spirit» (Ez 18,31) to the joy of the dwellers in heaven. For if, according to the Gospel, the conversion of one sinner stirs up this joy (Lk 15,7), how much more will the salvation of so many souls not stir up the heavenly inhabitants to rejoicing?