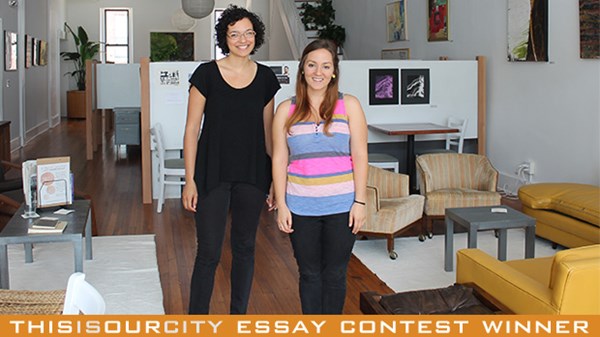 A Place for Creatives to Come and Perch

Unless you're paying attention, you might mistake the "café work area" of Mercury Studio for another coffee shop, only without the periodic clamor of an espresso bean grinder. When I visited the controlled bustle of the workplace (equal emphases on work and space) this fall, I began to see rhythms and relationships that make this "community-minded coworking space" different from the third spaces in abundance here in Durham, North Carolina.

Near me sat an ER doctor at his personal desk diligently writing a novel. A "home-schooled" teen—which, in this case, deserves scare quotes, as the studio becomes equal parts "home" and "school" on any given school day—works slightly less assiduously through a Mark Twain novel. Later in the day, after-hours studio members drifted in (all members have keys and around the clock access) to work on their passions and/or professions, everyone from videographers to pastors and accountants. Everyone who uses Mercury Studio pays to be a member, and prices vary based on need and use, from the periodic café member to the more dedicated desk or studio member. Some members are full-timers hanging their shingle in the company of others. Others bear a litany of "who-also-______" titles: some who-also pursue a passion, some who-also start to work on the next thing to get them out of the job they hate. Whatever the scenario, they've been welcomed into a different way to do it at Mercury Studio, which opened in early 2012.

Katie DeConto helped start Mercury in part because of her first job after college, an office gig that made her wonder if "pushing papers is all there is, you might as well get comfortable," says the 27-year-old New England transplant. But she relished the fact that her job let her build relationships. "I began to realize what a wasted opportunity it would be not to be able to get to know people who are different," says DeConto.

Meanwhile, Milligan College friend and trained painter Megan Jones contacted Katie with similar thoughts. "Both of us were realizing the value of a community of people who keep you accountable but also respect the work that you're doing," says Jones. Connecting professionals, part-time creatives, and professional artists is especially key for Jones. She says, "Bringing actual artists into the picture elevates the view of artists as professionals and not just 'art as hobby.'" Non-artists and artists need each other, for they each have something unique to offer the other, says Jones. And artists certainly need other dedicated artists to provide the kind of mentorship and companionship specific to their craft. One of Jones's early major contributions to Mercury was the vision of professional rapport among like and differently skilled creative professionals.

In this pursuit, Mercury has been true to its elemental namesake: acting as a thermometer and indicating the kind of sea change bubbling up from its surroundings. Without restaurants, art galleries, a major indie record label, and other co-working and creative entrepreneurs around it, the studio might seem like an oddball, either unaware in trying economic times, or painfully idealistic about the desire for people to want to be around each other. Instead, Mercury Studio fits in. It makes total sense in the landscape and dynamic of a city named by The Atlantic as the most creative-class rich metro area in the nation.

Located on the edge of a growing and renewing progressive Southern city, Mercury Studio differs from other small business incubators in that it doesn't merely serve as a space to get off the ground and then leave, but rather a more stable spot in which to create. Rather than viewing Durham, with it's affordable cost of living and entrepreneurial spirit, as a launching pad to bigger and better things, many of Mercury Studio's inhabitants are committed to growth and welfare of their fair Bull City. But ask if Mercury Studio is a "Christian business," and DeConto shifts in her seat. "This place is so saturated with Christianity that almost everyone knows. We've tried to build it on community and grace, concern and consideration of everyone around you. There are no crosses anywhere though.

"It's very natural," DeConto says, "all of it flowing out of what we want to be as people and what Jesus might do."

While half of the Studio houses carrels and café tables and the other half gallery and artist studio space, the entirety bears Jones's aesthetic touch. Almost every detail of the old storefront, from its repurposed doors-make carrels, to its gallery space bearing the art of a renowned concert poster artist, hints at the intersection of creativity and hospitality that DeConto and Jones have fostered.

In his book The War of Art, author Steven Pressfield says, "The artist committing himself to his calling has volunteered for hell, whether he knows it or not. He will be dining for the duration on a diet of isolation, rejection, self-doubt, despair, ridicule, contempt, and humiliation." Mercury Studio is designed precisely to combat this sort of existence. While many artists know and experience Pressfield's description, these co-workers feast on something more than either the mere proximity of coffee-shop working or the isolation of secluded studio life. Through "art salons," workshops, and other events, the artists stared criticism and ridicule in the face. The result is something strange and at times downright trinitarian: finding one's existence enriched and passions flourishing in mutuality. These salons offer critique and interpretation for finished or unfinished work, and have served to raise the water level for local artists. They represent hospitable safe havens from the harsh world of inattentive and often unfair criticism, instead providing room for contemplation and advice. In the past several months, Mercury Studio has begun monthly "Listening Rooms," events that invite local musicians not only to perform but to receive questions, offer answers, and provide an interactive glimpse into new and often unfinished material.

While Mercury's doors have been open for a year, Jones and DeConto are excited to see how every new member will change the identity of their experiment. DeConto says she is continuing to learn ". . . the power of giving a person a space to belong without expectation. I've seen that in my home, my community, and in my church. I've watched the effect on a person who has not previously been given that, being told that they are allowed and accepted and cared for. To get to watch them blossom and achieve things."

Changes are also indicators to Jones and DeConto that the mustard seed of an idea they planted in early 2012 is growing into something much bigger: a witness of creativity and hospitality to the city around it, a place for workers, like birds, to come and perch.

A Place for Creatives to Come and Perch