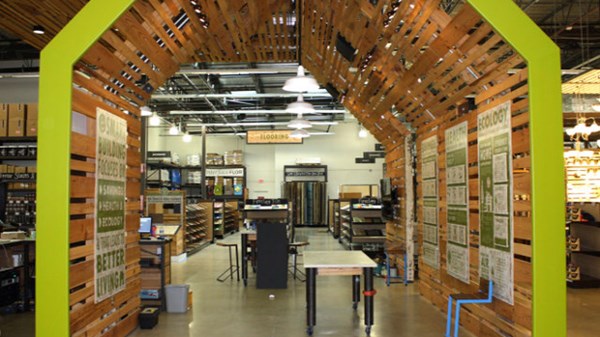 Austin, Texas—with its "Keep Austin Weird" motto emblazoned on locals' t-shirts and bumper stickers—is ground zero for a green-building revolution, due in no small part to nearby University of Texas, hipster culture, and a booming technology startup scene. The self-proclaimed "live music capitol of the world" will also be the second U.S. city to get Google Fiber, an Internet-cable plan that Google promises to be 100 times faster than today's standard broadband.

The culturally liberal enclave in a vast red state might not be the first city that comes to mind when you imagine the future of Christianity. But when you're trying to figure out what God is up to, "weird" is a good place to look. And maybe the weirdest thing about Austin is not the Google Fiber streaming in its front door, but rather the treehouse in its backyard.

Just off of U.S. highway 290 in South Austin sits TreeHouse, a home improvement supply store for "smart building and better living," specializing in environmentally conscious installations that save energy.

Since opening in 2011 and seeing $3 million in sales so far, TreeHouse is one indicator that providing homeowners with more energy-efficient and sustainable products may be a business model as economical as it is ecological.

TreeHouse began in 2007 in Frisco, Colorado, as Evan Loomis and Jason Ballard, two of the original five co-founders of TreeHouse, found themselves sitting in a micro-brewery instead of skiing, hatching a plan to create the Whole Foods of Home Depot.

Loomis and Ballard had been looking for something like TreeHouse ever since their days at Texas A&M University, when they became close friends in the Aggie's Men's Club, sort of a purpose-driven frat house.

"Some of us are doctors, some have gone on to formal ministry, but we all shared this conviction that we didn't want to waste our life," says Ballard.

After graduation, Ballard took his biology degree and worked in sustainable buildings, while Loomis took his finance degree to Wall Street. But in Colorado, they stumbled upon an idea that married their experience and passions to a great need.

To buy from sweat shops and businesses that place no value on environmental destruction, is to value sweat shops and environmental destruction. Jesus clearly states that we are to seek the kingdom of God first- work is to incarnate love and service, to meet material needs, and not to 'maximize material gain'. The material is to be subservient to the 'spiritual'. In what I can see of your view, man's actions are not free choices, but dictated by 'economic law'. That is not a 'Christian' view of man." (New comment)We are called to stop sinning, to stop from acting from greed; to act in mindful, consciously loving ways: to love the creation that God gives to sustain us though minimizing pollution and non-sustainable economic activity; loving our fellow man through providing work with adequate wages, safe workplaces- and not to depend on the abstraction that is 'the marketplace' to do it. We are responsible for the choices we make.

"Roger: you seem to continually view the world through the narrow lens of your own discipline-economics- without considering the broader context in which 'economics' rests. It is the 'biosphere' that provides for man's material well-being; but that same biosphere also supports our biological life. Trees don't just provide board feet of lumber for man's 'use'-they also anchor the soil, provide habitat for other forms of life, and convert CO2 to 02 in the closed system of the earth. None of those last gifts of trees is now currently adequately figured in the 'market price' for lumber. Man's material use (economics) also does not exist apart from human psychology and choice; 'the marketplace' is nothing but an abstract term for the result of many individual choices. What individuals value is reflected in their choices. 'The marketplace' reflects no values, other than what people place in it. (cont.)

I really enjoyed seeing that this article was posted, and funny enough, I'd heard about Treehouse last year from a friend and she was raving about it. I wanted to point to a (very) side issue, though, when Bret wrote, "The culturally liberal enclave in a vast red state might not be the first city that comes to mind when you imagine the future of Christianity." While my comment is not a criticism per se of the writer, I wanted to point out that his statement betrays something many of us take for granted, and do so erroneously, in my opinion. I almost skated past it myself. Historically, it wasn't just that Christianity had an unlikely spread in places that exhibited loose morals. Christianity sprouted up surprisingly in the places that were "establishment," and/or affluent. After all, Constantine probably turned a few heads claiming Christ, as did Nicodemus before him. Christianity is counter to all human cultures.

Ray, the planet and all societies are under the curse of the fall until Christ returns. Christians cannot undo that curse. Only Christ at his coming has that power. Until then, Christians can do no more than alleviate some of the suffering that the curse inflicts on rebels against God. In fact, Christians will continue to suffer from that curse when we experience natural disasters and illnesses. The only part of the curse we don't suffer from along side the rebels is that which comes from our own sinfulness. Rebels will continue to inflict themselves with greater suffering because of their sin and nothing short of conversion will change that.