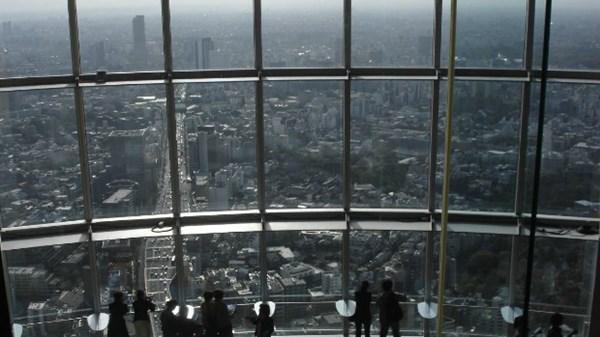 And why, in comparison, the suburbs so often feel flat.
Aaron Renn

Suburbs are often unfairly maligned as lacking the qualities that make cities great. But one place that criticism can be fair is in the area of sacred space. There most certainly is sacred space in the suburbs, but usually less of it than in the city both quantitatively and qualitatively. In fact, the comparative lack of sacred space is one of the distinguishing characteristics of the suburb that makes it "sub" urban, that is, in a sense lesser than the city.

Lewis Mumford, a historian and sociologist, put it this way:

Behind the wall of the city life rested on a common foundation, set as deep as the universe itself: the city was nothing less than the home of a powerful god. The architectural and sculptural symbols that made this fact visible lifted the city far above the village or country town. . . . To be a resident of the city was to have a place in man's true home, the great cosmos itself.

Mumford was onto something here in positing how great temples and such distinguished the city as unique.

What Is Sacred Space?

Here are three ways sacred space can do that. It can:

As one example, consider the Indiana World War Memorial in downtown Indianapolis. 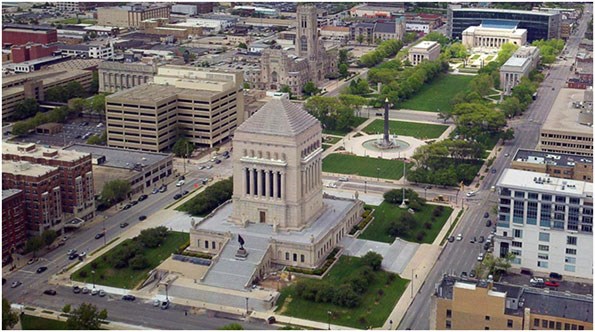 This building is of course a symbol of the bedrock American values of that community and the willingness of its people to die to defend them yesterday, today, and tomorrow. Thus it is both a cultural repository and a temporal linkage.

Also note the use of neoclassicism. The use of neoclassical architecture anchors Indianapolis and Indiana firmly within the 2,500 year history of Western Civilization, as a link in a chain of peoples connected by shared, timeless values and extending backwards and forward throughout time, thus achieving a sort of immortality. This building is a statement of the permanence of this community, its people, and their values.

We can also think of a radically different space such as Times Square, and how it has played host to so many civic celebrations and traditions over the years such that it has become not just a local but a national repository of our culture. The ball dropping on New Year's Eve is an obvious example. But consider also this iconic photo. 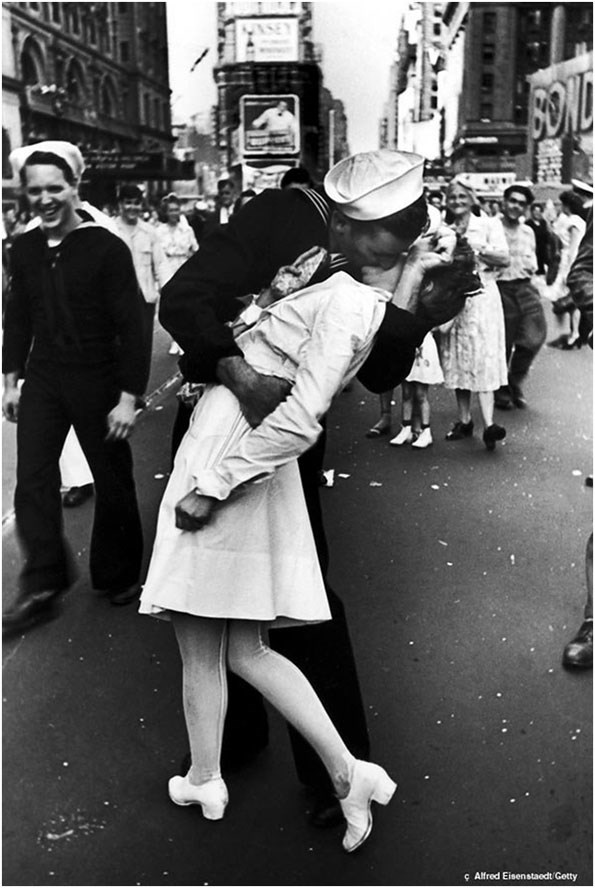 This is one of the most famous pictures from the war era and I don't think it's any surprise it was taken Times Square.

How Suburbs Are Comparatively Lacking in Sacred Space

Let's apply the definition of sacred space to the suburbs. Yes, suburbs do have war memorials and culture and traditions and churches, but in general these are qualitatively different from what is found in the city core. Here are three reasons why.

1. Suburban traditions and spaces are often ephemeral and generational. When I was in high school, everybody liked to go to a place called Down Home Pizza in Corydon on the weekends. And that was something kids from every high school in the area did, not just those from mine. Today that place is long gone. And the kids are doing something else, whatever that may be. In fact, it's amazing how many of the places and traditions from my high school days are already gone after only 25 years because of physical and economic changes in the community such as restaurants and stores going out of business.

This happens in the city too, like when the department stores went under, taking their white-gloved tea rituals and the like with them. But to a much greater extent than the city, suburbs rely on commercial establishments as focal points of shared experience, and by their very nature those tend to come and go. And suburbs have not to nearly as a great a degree established truly trans-generation rituals and spaces.

2. Lack of transcendent scale. This is also something Mumford hints at. The "human scale" is a buzzword in urbanism today. Contrary to what many say, the suburbs actually do a pretty good job of the human scale, especially from an automobile era perspective. But a unique essence of urbanity and often of transcendent experience itself is what we might call the "anti-human scale." British writer Will Wiles put it this way:

The "human scale" only tells part of the story of the city – after all, this can be found in villages and small towns. All cities need sublimity, a touch of holy terror, a defiance of human scale that asserts connection to the greater urban whole.

The sheer scale of something like the Indiana War Memorial, which is a very imposing structure inside and out, renders it qualitatively different that your average small scale suburban memorial. This is true not just physically but also in terms of the humanity represented. That memorial stands for an entire state, not just a single town. Which is the same reason there may be more suburban school kids who have visited their state capital or the US Capitol than their local village hall. There's a reason the U.S. Capitol and the Lincoln Memorial and such have such powerful resonance. They represent an entire nation and a vast sea of humanity. Cities also participate in this scale effect.

3. Low-quality religious architecture. When it comes to the most obvious category of sacred space, the religious building, the suburbs also fall flat. That's because Protestant Christianity, the largest suburban religious strain, has in many pockets become unmoored from the transcendent. This is clear, for example, from the rise of what has been dubbed "Moralistic Therapeutic Deism" as a dominant worldview, especially among the young.

The average suburban megachurch is an architectural horror show. The best of them generally rise to the level of an upscale corporate conference center. The worst are like "That 70's High School."

Someone once said that all sin results from failing to believe one of the "4 G's" about God: namely, God is great, God is good, God is gracious, and God is glorious. (I've adopted this concept loosely from pastor Tim Chester.) Applying that to religious life generally, if we were to look at the architecture of many modern evangelical churches, God may be very good and gracious, but he's doesn't seem all that great, and he's certainly not very glorious. This is religion that can inspire good works, but not great ones. There's no trace of the overwhelming glory of God in nearly any of these structures. There's no longer a faith like the Lutheranism of Johann Sebastian Bach that can inspire the greatest works of human artistic achievement. Because modern suburban church architecture is so poor and so disposable, it diminishes the impact of sacredness in the space.

The recent stories about the sale of Orange County's Crystal Cathedral, designed by Philip Johnson, brings to mind an exception that proves the rule. 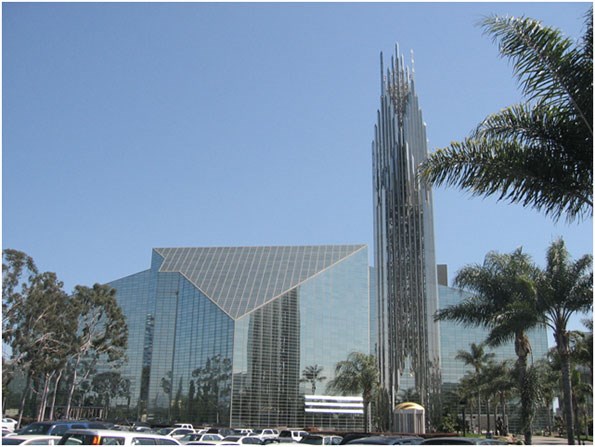 Unsurprisingly, it was the Catholic Church that bought it. Unlike Protestantism, Catholicism has always had a theology of place. And they've always used architecture and art as a way of telling the story of the gospel. Though obviously not in this case, they've also used Gothic neoclassical architecture as a way creating a sense of permanence and linkage to an everlasting, eternal church.

So sacred space is one area where the suburbs really are deficient versus the city. But how important is this? Metropolitan areas today are mosaics. In an ever more complex and competitive global economy, every part of a region, city and suburb, needs to know its role on the team and bring its A-game. Just as there's no need for every job to be located downtown, there's no need for every major piece of sacred space in a region to be replicated in every suburb. Downtown does just nicely.

However, this is one reason that while economically the core may no longer dominate a region, a healthy center still plays a key role in overall regional vitality. That's because it remains home to things like the major pieces of sacred space such as war memorials and cathedrals that bind a region together and give it civilizational permanence, meaning, and purpose beyond the mundane.

This article originally appeared on the New Geography website.

Aaron M. Renn is an independent writer on urban affairs and the founder of Telestrian, a data analysis and mapping tool. He writes at The Urbanophile and has written for This Is Our City about casinos, Detropia, and perceptions of Detroit.

I totally agree that the typical church built today is greatly lacking in the aesthetic sensibilities of earlier generations. No doubt. BUT the best of them are well suited for the purposes for which they were built: to be flexible so that the building can host a church service one day, a father-daughter dance the next, the youth play for Christmas, a fundraising banquet for a local charity and my church is even cable of recording live albums and videos. Traditional structures can't accommodate all that with good lighting and sound, to boot!

There is of course another equally valid view: "the Kingdom of God is within you." I wonder what St. Francis would have thought of all this. I recently visited St. Paul's in London. As an American, I was astounded both at the grandeur, and the fact that on Sunday morning, roughly 40 people were in attendance. The priest on duty was so dispassionate and disengaged, I almost wept. As I walked back to my hotel, I was reminded of the meme that pictures a starving African child with the caption "I guess it's awesome the Pope has his own helicopter." Many (other) Protestants spend less on architecture not because they are aesthetically illiterate, but because they believe money should be invested differently. The author is certainly entitled to his opinion that larger churches are architectural horrors, but I frankly would rather sit in a well-designed space where I can see and hear, than in a cavernous empty shell with pretty stained glass.

No one wants to live in sacred places; they merely want to visit once in a while. Suburbs are close enough to visit such places when anyone wants to. People act like suburbs and cities are on different planets. The value of suburbs derives from being close enough to the city to take advantage of it while being far enough from cities to avoid their disadvantages, of which there are many. The real contrast would be between cities and small towns or rural areas. Of course, then you have to consider the sacred space of nature and the enormous value of it.