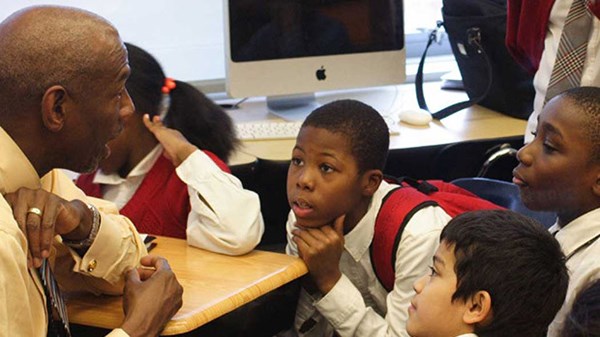 The founder of the Harlem Children's Zone on why it takes a whole community to educate a child.
Interview by Allison J. Althoff

When Geoffrey Canada launched his pilot school program in the late-1990s, it stretched just one block of East Harlem in New York City. Today, the Harlem Children's Zone (HCZ) covers 97 blocks and reaches over 8,000 children in one of the hardest areas of the country to get a decent education and escape generational poverty. HCZ's success, rooted in the belief that public education must be part of holistic community development, has made Canada an educational expert of our time, garnering praise from President Obama and a leading role in the 2010 documentary Waiting for Superman. Named one of Time magazine's top 100 in 2011, Canada recently spoke with Allison Althoff, reporting on behalf of the City project, shortly after the Willow Creek Global Leadership Summit, where Canada addressed the importance of faith and education. There, he explained the mind, heart, and soul behind HCZ—and how Christians can play a part.

One of the founding principles of the HCZ is that children's education cannot be divorced from where they live. Why is "place" so central to educational success?

In our country, we've allowed some communities to become toxic for children. These are places where the schools don't work and young people don't feel safe. There's crime, drugs, and violence in the streets and often in children's homes. Without real support in a community, the kids who don't go to a "good" school will end up in trouble with really negative outcomes.

We thought one way of approaching this problem was to literally draw a line around our community and say: "All of the kids in this community, regardless of if they go to our school or not, will make it, and the community will begin to heal itself and become a safer and a better place." We want our community clean, without filth on the streets; we want the adults to have a sense of pride in their community, and want young people to learn a sense of service. We believe school is an essential part, but rebuilding community is really critical to our work.

How would you like to see Christians more effectively engage our public school system?

Two things: First, it'sbest to start close to home. Sometimes people want to get on a plane and travel to another country, which is fine. But I don't want folks to miss out on the fact there's probably a young person in their extended family or community who needs an adult to understand why they're special, and to help them learn how to turn that specialness into a productive set of behaviors. When I was young, a number of people close to me decided I was special. The truth of the matter was, I was no more special than anyone else, but in people telling me I was special, I decided I was, and this changed my behavior.

This is more than saying, "Oh, you're special." This is, "I've spent time with you, I've watched you do x, y, z, and you are a special person." A kid looks at that and says, "Wow, they actually saw something in me other people don't see."

Second, you don't necessarily have to say, "I'm going to volunteer to teach reading or math," but you have to be very clear with principals, superintendents, and political leadership. It's important we come together as a community to solve this problem. The average man or woman who says to folks in positions of leadership, "I'm committed to this, I care about this, I'm going to be following this," will change things in a way that people underestimate. It's usually a very small amount of people who have a disproportionate impact on policy in our country. I would love to see our community become those folk who throw their weight around because they know they're fighting for the right thing.

How does your faith inform your work on educational reform?

I grew up attending church on a regular basis. When I became of age and was able to travel around the South Bronx by myself, I began to notice on the very block where our church held services, there were folks who had given up—drug addicts and alcoholics alongside people who were cursing and treating kids as if they were less than human. I said to myself, "I thought Christianity taught us to go outside and be with the most disadvantaged?" It seemed to me that instead of helping these folks, people were putting them down and holding up their noses, feeling good that they were inside the church while the bad was outside. It made me lose confidence in my own faith, and it took me some number of years before I began to understand this had nothing to do with the teachings of Christianity—it had to do with individual churches. Some accept this mission and some don't.

My own faith was nurtured by my grandmother and her clinging deeply to her faith when she was dying a painful and slow death from cancer. I quizzed her on why God would do such a terrible thing to such a wonderful woman. Her faith never wavered during that time, and it's made me remember these early teachings about faith when things have gotten tough at my job or in my life.

What is the role of faith-based communities and organizations in bringing new life to a neighborhood?

I believe that for lots of churches and religious institutions, their main focus on the development of faith among parishioners needs to spread to the community. People don't believe or understand that a community can lose hope. You can have a whole community where hopelessness is the norm, where folks don't have faith that things will get better because history and circumstances have proven over 30, 40, or 50 years that things don't get better. Part of what helps folks' faith grow is seeing it exercised on a regular basis, like when you hear people say, "We're here, we stand with you, we're going to partner with you not just for a weekend or a Sunday, but on a regular basis." HCZ is working on 97 blocks, but we literally started with one block, in one apartment building, trying to help the neighborhood become better.

Why should Americans have hope for the future of our educational system?

We should have hope [because] we haven't tried very hard. It would be one thing if we'd tried everything possible and we simply can't get the kids to learn, but the truth is, we haven't given it our best as a nation. So I am optimistic that when our country, cities, and communities decide to prioritize encouraging young people to grow up to become important and meaningful contributing adults in society, we will begin to innovate and be scientific about these children learning. Unlike other folk who look and say nothing has worked for 50 years, I see it differently: If the same thing has failed for 50 years, it's time to try new things. We're bound to find things that work. We just have to get our institutions and our professionals to understand we're going to have to try some new approaches.

No child in America should have to suffer growing up in a place they feel abandoned, where they don't feel the goodness, hope, and love that young people ought to grow up with. As people of faith, we can hold people accountable and say, no matter what we do in this country, we won't undermine the future of our children.