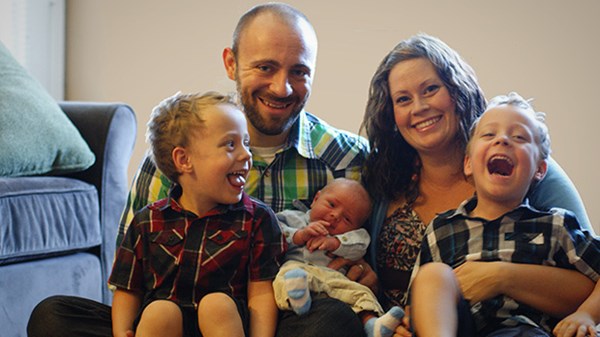 Loving the Loners, One Apartment at a Time

In order to love one's neighbors, one must first know who they are—a teaching that's much easier said than done in a place like Phoenix. One of the largest U.S. metro areas, Phoenix is home to a multitude of transplants but surprisingly few natives, boasting a constant growth rate between 1.3 and 5 percent over the past two years.

Newcomers drawn in by the warm sunshine, abundant palm trees, and stunning mountains also encounter the independent spirit of the Southwest, where friendliness is oft regarded with suspicion. Many transplants who have left family behind find it difficult to adjust to a city where the scorching heat drives people inside air-conditioned homes and away from public spaces.

Many transplants come for school. Residents at the Sage Stone apartment complex in the suburb of Glendale come for a large medical college nearby. Renters there often stay for a window of time until they are assigned medical residency elsewhere, return home, or purchase a home in one of Phoenix's many suburbs. Amid this heightened transience, neighbors are temporary, stacking the odds even further against community.

But one couple at Sage Stone has a vision for something different, and they think Christians should make it a reality. They wonder what would happen if Christians in Phoenix met new residents with a friendly smile and an invitation into relationship. Is it possible they could upend Phoenix's loner culture?

Chris and Bethany Priebe are giving it their best shot. The couple met at youth group in northwest Phoenix. Chris had grown up in a broken home, going to church, but with varying religious perspectives in the family. Meanwhile, Bethany began to see she could transplant her childhood dreams of being a foreign missionary directly to Glendale. As the two planned for marriage, they discussed how they would get to know their neighbors.

Once married, they moved into an apartment where work and church kept them from knocking on the door next to theirs. They dreamed of moving into a home where they could throw block parties and invite neighbors over. But even after moving, church, family and jobs perpetuated the phrase, "Tomorrow—we'll do that tomorrow."

Along with most other Phoenix residents, in 2007 the Priebes watched the value of their home begin to plummet. They then learned the funding for Bethany's nonprofit job was ending. As they prayed about how to move forward with no home equity and an upcoming job loss, Bethany and Chris learned they were pregnant with twins. At 22 weeks, Bethany was hospitalized for six weeks and put on complete bed rest, with Chris sleeping on an adjacent makeshift cot. Faced with the risks to their babies as well as climbing medical bills, Chris thought, Maybe God is getting our attention. We should look at how we said we wanted to live.

Meanwhile, Bethany had heard about a faith-based nonprofit called Apartment Life, which places teams in apartments to serve complex managers by helping foster community. Within a week of applying, the Priebes were placed at Sage Stone and moved in in May 2009.

"We immediately felt more at home in the apartment than we did in our house, because our mindset was different," Bethany recalls. "Apartment Life was providing the accountability and support we needed to live how we wanted to live. God has blessed us so much, and we want to bless other people."

A group of Christian businessmen who saw the potential for community in apartment complexes founded Apartment Life in 2000. Some were real-estate developers and investors, others had done outreach at low-income complexes. Pilot teams launched in Dallas, Phoenix, and Flagstaff, and are now in 13 major cities in nine states.

The housing assistance allows Bethany to stay at home with her children while planning events for neighbors. In addition to helping with such activities, Chris runs Big Mouth Presentations, a local nonprofit that brings motivational speakers to Phoenix public schools to dynamically teach character values. As a Phoenix area director, Tyler Staton encourages and supervises teams.

"I love receiving their monthly reports," he says. "The Priebes consistently go above and beyond our requirements. They carry groceries, get the mail or feed pets while residents are out of town, give rides, babysit, and host dinners. They genuinely care."

The Priebes have also hosted breakfasts, game nights, kids' craft nights, and popsicles by the pool. Their favorite activity during the months of 100-plus temperatures is to transform the Sage Stone golf cart into an ice cream cart. Decorating with balloons, signs and festive music, they drive through the parking lots handing out free ice cream. Chris admits half the fun is simply driving a golf cart.

A Normal Way to Live

An apartment complex is not the obvious living choice for families with twin toddlers and a newborn, or any family looking for relationships with neighbors. The Priebes wish they could send their kids out to play in a backyard, and that they did not have to constantly start over with new neighbors. They struggle to communicate with the Indian family living upstairs and are interrupted getting out of their car by the lonely talkative woman when they just want to get their children down for a nap. Sometimes, when trying to offer a friendly welcome, they hear from behind the door a whispered, "What do they want? Don't answer it!"

As Bethany observed, "When you are financially not in need, you don't always realize the depths of need for relationship and connectedness." Many Sage Stone tenants are uninterested in what they are offering and haven't attended a single event.

But then Chris and Bethany watch their boys play by knocking on doors, pretending to "meet their neighbors." Or they receive heartfelt thanks from someone and realize that simple care matters. "Instead of burning out by focusing exclusively on building relationships, we have to stay focused on all that Christ has given us, how he served us and brought us into a lasting community," Bethany said. "Then we can keep pouring out."

Chris says they hope that "people who are experiencing community for the first time in Phoenix [will] be part of building it somewhere else when they leave."

Sarah Ellis is one of the former Sage Stone residents who has kept in touch. Sarah's family arrived in Phoenix not knowing a single person. Bethany and Chris immediately reached out. "They were always so kind; anxious to help without expecting anything in return," Sarah said. As Sarah anticipates moving again, she hopes to reach out in similar ways. "I tended to stay out of other people's business before. But, I've learned not to be afraid to reach out. The Priebes were never imposing. They were just available."

The Priebes anxiously await seeing the fruit of their hard work to relate well. "As we work out our faith within the community of our church, we see how this should be a normal way for Christians to live," Bethany said. "We want people in Phoenix to say, 'Christians know how to serve and love other people. They build community well.' We want them to know us as Christians by our love."

Katie Hoiland, an Arizona native, is an advocate for the vulnerable who served for eight years at Food for the Hungry and currently works independently for various nonprofits. She lives in downtown Phoenix with her husband, Tim. Find her on Twitter @katienoelle.

What a fabulous idea.

Loving the Loners, One Apartment at a Time