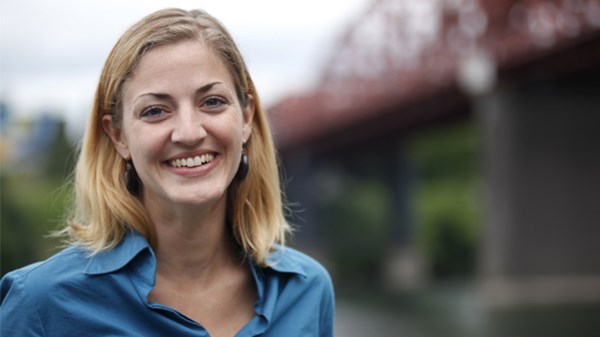 Lobby and compromise. Two loaded words when it comes to politics, yet they describe much of the work that Stephanie Tama-Sweet does as a lobbyist in the nonprofit health care industry in the Oregon state capital. CT video producer Nathan Clarke sat down with Tama-Sweet, 31, in Portland to ask what it's like to be a follower of Jesus working for the flourishing of greater Portland through an industry rife with vested interests and doublespeak.

Q. What do you do as a lobbyist?

You're communicating your issue and the priorities of your client to an elected official and trying to win them over to your interests. Essentially, you are a communicator, but you're also working on marketing and relationships.

Q. Why did you decide to become a lobbyist?

In 2009, Oregon passed landmark legislation that expanded health coverage to 80,000 children and 50,000 low-income adults. Prior to the bill, Oregon had one of the highest rates of uninsured children in the nation, at about 12 percent. As a Christian, I was drawn to the issue because of the clear value Jesus placed on the physical, mental and spiritual well-being of people (my favorite verse is John 10:10). I have also personally experienced the stress of not having health insurance and know that the cost can be extremely high - too high for many people - to pay out-of-pocket. Lack of insurance can be a major cause of stress for families, often forcing people to seek emergency medical help which is costly and drives up the price of health insurance for everyone in the system.

I believe my work is furthering the work of Christ in the community because I'm helping to bring about structural change that influences real peoples' lives and helps them live the life that God intended for them, to help set up a more beloved community.

You may have heard of the payday loan bill? The average interest on a quick payday loan—say a low-income person broke her arm and needs to pay for health costs in cash—is about 500 percent.

For many low income people, this is one of the only avenues for getting short term cash. It enslaves them in a cycle of debt. She takes out a $1,000 loan, and suddenly she is paying off thousands and thousands of dollars to a payday loan shop.

There was a huge coalition that worked together on that bill, and we were able to cap loans at 36 percent interest. It's still pretty high, but much lower than the 500 percent that had been the average.

We use the tap water analogy a lot. If the sink is overflowing with water, it's pretty silly to go and grab a bucket. You should rather turn off the faucet so that it stops leaking. I think that's one of the ways that you can make a difference is by turning off the faucet.

Q. Many of our ideas about lobbyists come from villainous characters in films and backhanded comments by candidates during presidential debates. As a lobbyist, aren't you just manipulating the system so your client can win?

I have moved away from the idea that you can pass a piece of legislation that is pure, that is totally good for the issue that you're serving.

What most often happens is you have a bill you are working on, for instance, getting fresh fruits and vegetables into a local community. It seems simple, almost boring. But oftentimes, competing lobbyists will insert that legislation with something that says that such and such industry will get influence or get a cut of the pie.

So you have to make a choice: "Is it worth passing this legislation even though it's not what I had originally intended?" Basically, you're making compromises like this all the time, trying to judge, "Is the end product beneficial to the community I'm trying to serve?" If yes, and if the compromises are not so great that they damage that goal, then I will still support that.

Q. Many college graduates enter politics hopeful and optimistic but end up cynical and weary. You have been working in the Capitol building for at least six years and still have a vibrant sense of mission and purpose. How have you been able to thrive in this environment?

You talk to friends. You have a support system. You cry when you need to cry. I'm tremendously blessed to have a spouse who understands. He works in the political realm, in a different degree, but still very much so. So he understands what I'm talking about, and that's really important.

But also just finding mentors to support and pray for you. There's a pastor here in Portland who took me under her wing. Having someone who loves on you like that and supports you was tremendously helpful for me, and still is. As a woman in a male dominated world, it's a very old … I'm a young woman, which is a unique position. Most people I work with are 20 years older than me and of the opposite gender. So having support from leaders who have blazed the trail is important.

Q. Our current political climate is acerbic and filled with rhetoric that paints the opposition as the enemy, or worse. How do you navigate these realities?

I try to ignore a lot of it. [laughs] I'm just not interested in the partisan public opinion out there. I have to pay attention to it, to a certain extent, in order to successfully do the work that I do and to understand where someone's coming from. For instance, if I'm talking to a Tea Party legislator or a very progressive legislator, I need to know what those identities mean, what resonates with them and what they're concerned about as far as a constituent interest. But personally, I'm much more interested in passing the legal policy.

When people start to actually engage in the political process, they start to understand that it's a lot messier than their ideas about the world.

You realize that it can't really be black and white.