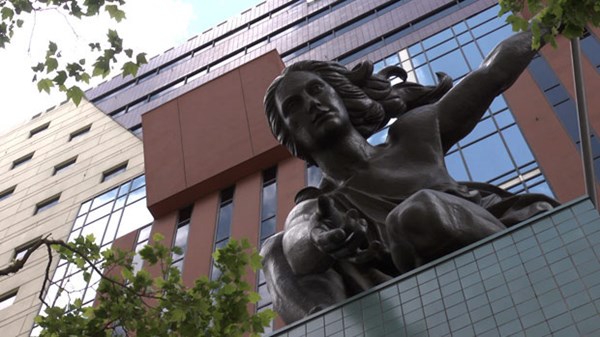 Christianity Today's newest film is provocative because of its gritty, grounded honesty. This is not a film about political pundits bantering back and forth exchanging policy talking points. Instead, it's about two very ordinary people, their deep faith in Jesus, and how that faith is leading them to engage two of the most consequential grassroots movements of our time. These movements have one beautiful thing in common: they are groundswells of ordinary citizens reengaging their democratic civic duty, letting their messages be heard and considered in the public square.

Last week, my coauthor, D. C. Innes, rightly pointed out that the film's title, "Liberty or Justice for All," and its structure seem to pit the virtues of liberty and justice against one another. Within the first minute of the film, liberty is clearly identified as the motivation for Emmett Bailey's Virginia Tea Party involvement, while justice is revealed as the motivation for Pam Hogeweide's Occupy Portland involvement. Both subjects say their involvement arises from their faith.

Bailey articulates his understanding of liberty and law this way: "The Founders' vision (and God's vision), was that we would be self-regulated. When God is being honored, people are regulating themselves, not regulated from the outside with laws." We see Bailey at a Tea Party rally where machine-gun-toting "patriots" listen to a woman remind the crowd of something they are "very familiar with." She launches into the Declaration of Independence ("We hold these truths to be self-evident …"). Then she twists history and identifies "tyrannical government" as the entity Americans must protect their rights from.

There's much to say in response. First, Bailey's interpretation of the Founders' (and God's) vision is idealistic. The Founders were not against regulation. They were not against law. Their first act was to create the U.S. Constitution and its Bill of Rights—a set of regulations and laws. They understood regulation and law as necessary tools for preserving liberty. As for God's vision, Bailey's read of Scripture seems rooted in dispensationalist soil. How else can one read the whole counsel of Scripture and think God's vision is the abolition of law? Consider the Ten Commandments, all of Leviticus and Deuteronomy, David's Psalm 119 love letter to the law, all the prophets who called the Israelites back to the law, and the words of Jesus, who declared, "Do not think that I have come to abolish the law or the Prophets; I have come not to abolish, but to fulfill" (Matt. 5:17)?

Second, the Tea Party spokeswoman's assessment that America's Declaration of Independence was a call to protect oneself against government in general, which she implies will always be tyrannical, is misguided. The Declaration of Independence was written by founders of a government who fought real tyranny—taxation without representation, imperial rule without democracy, foreign rule without self-governance. And that self-governance was not about an individual's ability to self-govern. It was about the colonists' lack of liberty to legislate and regulate civic life apart from the crown. The Founders were not a band of individuals fighting the big bad monster called government. They formed a government to fight foreign rule. That was the context for their declaration.

Meanwhile, we see Hogeweide writing her Occupy Portland sign for the day: "Corporate Personhood = Corrupt Government." What fuels her engagement? Her desire to see revival.

"I've been one of those women," she says, "who has been like, 'Rain it down, God. Bring revival to America.' " Then she attended an Occupy march and scanned the crowd. It suddenly occurred to her: "What if this revival is not gonna happen inside the church?"

I understand what Hogeweide means. Through most of my teens and 20s, I sat in pews and prayed for revival. I prayed fervently that the Holy Spirit would break out across this land and transform lives and hearts and bring people back to Jesus. But my sense of what revival would look like was rooted in an individualistic, suburban, middle-class understanding of a faith that was, frankly, born in a communal, largely urban, politically and ethnically oppressed culture. My vision of revival was limited to individual holiness.

What I believe Hogeweide caught wind of at the Occupy rally was the vision of revival we see in Mary's Magnificat: "He has brought down the powerful from their thrones, and lifted up the lowly; he has filled the hungry with good things, and sent the rich away empty" (Luke 1:52-53). She caught the vision of revival that Jesus had when he proclaimed in his first sermon: "The Spirit of the Lord is upon me, because he has anointed me to bring good news to the poor" (Luke 4:18a, NRSV).

She caught the vision of revival Jesus had in his instructions on how to pray: "Our Father in Heaven" (in other words, not our oppressor, Caesar, who calls himself the father of the people he oppresses), "hallowed by thy name" (in other words, "God, your name is the highest name, not Caesar who says his name is the highest name"), "thy kingdom come; thy will be done on earth as it is in heaven" (in other words, we are your subjects, God, not Caesar's. Subvert the will of our imperial conqueror and let your will be done, not his!).

And Hogeweide caught the vision of revival that some of the first evangelicals had when their faith led them to the public squares of England and the United States to call for the re-formation of society through changes in public law and the institutions of regulations to end slavery, exploitation of labor and animals, and gender inequality.

Innes minimized Hogeweide's vision of revival, and in so doing overlooked evangelical church history and the theology that birthed it.

Most striking to me is the fact that neither subject of this film mentions the "opposing" virtue. But one only has to look beneath the surface to find it dormant—not dead—to these faith-filled patriots. Bailey, an African American, values liberty above all else. Toward the end of the film, he says, "If you don't have your freedom, nothing else matters." I understand that. For Bailey, lack of liberty is injustice. I only wish he would seriously consider the lost freedoms of 99 percent of the population when corporations and the richest 1 percent are given complete, unregulated liberty. For Hogeweide, justice equals liberty from corporate tyranny.

This week, Rep. Paul Ryan, Chair of the House Budget Committee, will submit his proposal for the Fiscal Year 2013 U.S. Budget. Most pundits predict it will be largely the same as last year's proposal, which balanced the budget on the backs of the poor. Two-thirds of all proposed cuts came from programs that help the most vulnerable among us, while Ryan offered tax cuts to the richest 1 percent. When his proposal drops, I urge CT's readers to watch this film and consider for themselves. Then let beauty have its way; engage the public square.

Lisa Sharon Harper is the director of mobilizing at Sojourners in Washington, D.C. She is coauthor with D. C. Innes of Left Right and Christ: Evangelical Faith in Politics (Russell Media).

Catholicism's flirtation with Marx was short. Liberal Protestant denominations still promote Marxism. But free markets and private property have been the historical position of Christianity. Those who deny it are inventing new theology equivalent to any heresy.

God created private property so that mankind could flourish. All societies that have held property in common have endured massive starvation. China lost 30 million to starvation in the 1960's. The Torah confirms God's sanctification of private property and Jesus affirmed it when he endorsed the Torah. As Rick wrote, the NT Church held property in high esteem, along with charity because charity does not exist without property. The Catholic church endorsed free markets and private property until it absorbed Marxist teachings in the 19th century. There are many Catholics who are Marxists. Liberation theology is Marxist Catholicism. Today, many Catholics, such as those at the Acton Institute, see Catholic social teaching as free market and private property oriented based on declarations by the most recent Popes.

The early church contributed voluntarily, and personally to the needs of homeless saints. It was not coercive, it was not dependent on an intstituitional re-distribution of wealth, taxing or tithing. Peter reaffirmed the rights of private property ownership to the early church “While it remained unsold, did it not remain your own?” The early church did not share its resources with all the poor of Jerusalem, only the believing poor in the church and only with strict standards. Single widows (not men) without family over 60 were given free food. As Paul says to Timothy in 1 Timothy 5:16 “If a woman who is a believer has relatives who are widows, she must take care of them and not put the responsibility on the church. Then the church can care for the widows who are truly alone.” I don’t “love” private property or capital. Curiously I would rather have your property, free food, free housing and i would prefer not to work for it. But, as the Bible teaches, that is irresponsible sin.

You really want to base an economic system on the Garden of Eden? “There was no private property in the garden of Eden?” Of course, there was only one married couple in the garden of Eden. When there was more than one family, God established private property rules and theft was a violation. Those principles are reiterated over and over in scripture. Jesus says “in my house are many mansions”, “I go to prepare a place for you”. As it says in Revelation 20 and Isaiah, during the millenium there are private houses, private ownership, cities, business enterprise. That is what humans do. Nor is everyone in heaven equal. There are varying rewards, varying treasure. You have plenty of theories but I would rather stick with what the Bible actually teaches.

Oh, so you have some wisdom that abrogates private properety? The 10 commandments are no longer valid (though shalt not steal)? The perfect wife in Proverbs 31 should not accrue capirtal and speculate in land? Peter establishes the right of private property in Acts 5, “While it remained unsold, did it not remain your own?” As 1st Timothy says, it is the LOVE of money, not money itself that is the problem. Hermit, have you sold all you own? Do you have any private possessions? Are you living on charity?