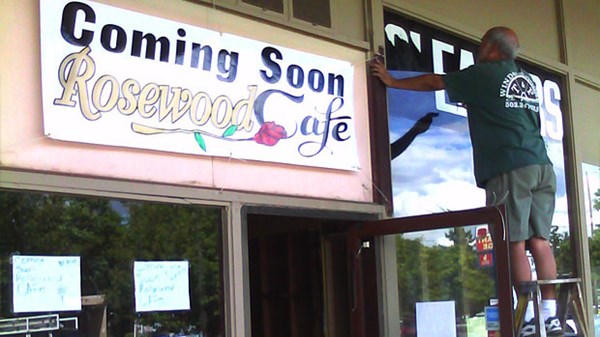 "The Rosewood neighborhood isn't really a neighborhood at all," says Mike Vander Veen, "but some of us are working to change that."

Mike, a community development advocate in Portland, is absolutely right. You won't find Rosewood on the city's map. It is a metropolitan marginalia bereft of the conventional signs of place: no edge, no center, nothing much to walk to. The area is seared as the jagged welding line between Portland's eastern edge and its suburb Gresham's western flank. A glance at the area's planning map reveals a disjointed jigsaw of zones, jurisdictions, and municipalities.

Boring as those words may be to most Christians, their consequences spring into 3D in Rosewood. Planners and developers are unable to build desirable destinations, neighbor kids go to different high schools, and a cop's jurisdiction depends on which part of which side of the street she is driving on. "We're in a borderland," reflects Mike.

This borderland has recently moved to the center of attention for an unusual coalition of police officers, AmeriCorp, and several small nearby churches. Each had been taking their own steps toward enlivening Rosewood. Now they're working together with residents to take responsibility for Rosewood's legacy and future.

A Confluence of Ministry Streams

Mike met Chief Deputy Jason Gates, unknown to one another but both active members at Parklane Reformed Church, a long-established church in Rosewood, as the coalition was gearing up.

Mike, a deacon at Parklane, had been facilitating many of the 140-person church's experiments in collaborative neighborhood engagement. "Our denomination was encouraging us to become a 'church-with,' " Mike recalls. "Which is to say, be a church that participates in our neighborhood, not only do kind things to it."

Meanwhile, Deputy Gates's drug response team and Rosewood's two precincts were at their wit's end over how to turn the tide against Rosewood's reputation as a hotspot of drugs, sex trafficking, and gun violence. They were ready to try something new.

Parklane staff invited Gates to teach the church and interested neighbors about meth's challenges, tragedies, and telltale signs. "I've done dozens of these presentations, but that's the only time it has ever been to a church," says Gates. It gave members a clearer sense of how to take a healing responsibility for Rosewood's future.

Parklane Pastor Vance Hays has lived in the parsonage for 23 years, and was initially unsure of what Mike and the deputy were up to. "I always knew that gospel proclamation and gospel works go together. But, you know, I'm conservative enough that I didn't want to be labeled with the social gospel moniker," Hays said over a cup of decaf. Hays felt clearer about where the church was heading after reading The Externally-Focused Church, Rich Rusaw and Eric Swanson's evangelical summons to collaborative neighborhood service. "That book … gave me permission," says Hays. "It made it theologically safe."

Momentum slowly gathered after Deputy Gates's Meth Day, a defining moment for Parklane. The deputy's stories illumined Rosewood's darker ambiguities vividly. He exposed them to challenges that Mike had been equipping them to see uniquely through the lens of a holistic gospel and an asset-based ministry.

"We're trying to be an island of sanity and care and community," says Hays, "in a neighborhood that doesn't have any sense of community." As it turns out, the island of Parklane was part of a wider ecclesial archipelago waking up to their responsibility among Rosewood's stakeholders.

Discovering the brutalized body of 37-year-old Amatha Mendive behind neighboring Freedom Foursquare Church in November 2008 was a wakeup call to local pastors. They began meeting regularly to support each other and to strategize about responding to the neighborhood's tumult. They knew something needed to be done—but what? And how? How could they begin to address the neighborhood's needs when so few of their members were actual parishioners—actual residents of Rosewood? And when most pastors are trained more in preaching, study, and counseling instead of community development, local economics, and gang violence, how could area churches wisely respond to Rosewood's challenges?

The way forward opened up when Rosewood's Gresham and Portland precincts reached out to apartment managers and a half-dozen area churches. The concerned cops knew they could only do so much as law enforcement, particularly among residents harboring distrust toward them. The police knew they needed Rosewood's stakeholders to help break the cycles of fear, addiction, and violence that smother it.

Resulting from this outreach has been the Rosewood Initiative, an ad-hoc nonprofit meant to catalyze neighborhood renewal. It functions as something like a neighborhood association for this borderland, a voice for those without one. And it has brought police, apartment managers, churches, and interested residents together to take hold of Rosewood's future.

Revitalization began with listening to neighbors and understanding what life on the ground is really like. "True, meaningful, and lasting social change will come from the people closest to the situation," says Jenny Glass, the AmeriCorp volunteer behind much of the Rosewood Initiative.

She and others discovered that the collapse of social capital in Rosewood is tied to the apartment complex's individualistic culture and architecture. "When you have an area full of strangers, then no one cares what happens," says Lt. John Scruggs. "If you have an area full of connected folks who know one another, people care, and then they call or take action."

In a neighborhood whose architecture resists redemption, stakeholders found that healing begins with relationship and community.

Can a Café Turn Around a Neighborhood?

Listening to the neighborhood revealed a strong hunch that relationship and community might be possible if there were somewhere for it to happen. They yearn for a so-called "third-place" to gather that is neither home nor work. Presently Rosewood's only options are strip clubs, dive bars, and a greasy-spoon diner.

To get community going, Jenny has helped the Rosewood Initiative spearhead opening the Rosewood Café. "The café is an important piece of what we are doing, a great strategy to get people working together," she says. "It'll be a neighborhood hub of positive activity that will start a ripple effect throughout the community—we hope!"

Hope, indeed. Money is scarce out here. Launching the Rosewood Café isn't like a multisite church opening a coffee-shop campus. Nor is it comparable to well-connected artisans curating a MacBook-lit, gourmet espresso mecca. This café will be done by Rosewood, for Rosewood. Neighbors and members of nearby churches are all pitching in: carpenters and plumbers volunteering the heavy lifting and others donating the furniture and computers for the space. Hays's congregants have been among those getting this cafe going, dabbling in Vander Veen's hope for becoming "church-with."

To be sure, church-operated cafes are en vogue among American church planters and international missional movements, but this is a different situation altogether. Even the most progressive and out-of-the-box cafe-churches have some ownership of the space. That Rosewood Café will be operated by volunteers and owned by the nonprofit strongly breaks script for most crema-keen churches, where church control of the café can always carry the hint of colonialism to neighborhood stakeholders. Here, the café's future will be beyond the terms of any one church, because it isn't here strictly for any one of the churches.

In this way the future may be uncertain - how long will tightly budgeted small churches be able to sustain enthusiasm for such a partnership? Neighborhood renewal is a long journey, much longer and slower than the short shelf-life of banner-and-campaign ministry drives. "It's a lot to ask of an established [religious] organization to participate in secular community-based action, even though it is very much in line with what many of them believe," says Jenny.

In so many ways, Rosewood's future is open, unsettled. Her renewal will not come from any single one of these efforts—mercy ministries, addiction education, the cafe, or more vigorous apartment management. It's hard to feel certain about seeing God's hand in it by focusing on one of them. But as one observes the steady confluence of these focused efforts, a wider subsidiary field of God's serendipitous sovereignty begins to emerge. It doesn't take a semiotician to read the signs: Rosewood's abrupt constellation of do-gooders and stakeholders reveals the slow workings of the city-healing Spirit of Christ.

More hopeful still, for those with eyes to see, I have a hunch there are Rosewood stories everywhere waiting to be told.

Brandon Rhodes is the husband of Candice and a doctoral student at George Fox Evangelical Seminary, where he is studying the impacts of automobility on North American churches. Brandon is applying this research as a Grassroots Storyteller and Field Guide with the Parish Collective. He has written for This Is Our City about the Springwater community.