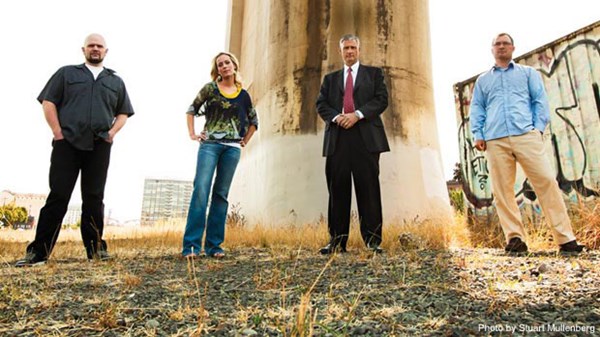 Shoshon Tama-Sweet has learned that for every coffee shop and independent bookstore in Portland, Oregon, there is a dimly lit backroom where children are sold for sex. "The Bedroom, Good Times, the Five Dollar Pub—that's a huge joint—and the high school's across the street," he says as we cruise 82nd Avenue, Portland's prostitution "track," on the eastside. "You've got the church on the corner, Rite-Aid Pharmacy, and JD's Bar and Grille, the pink-lettered strip club."

Like many Westerners, Tama-Sweet, 36, had long considered trafficking an overseas problem. When doing development work in the coastal town of Mombasa, Kenya, he'd see teenage girls standing on the docks, waiting for tourists. "I'd read about trafficking in places like Cambodia and India," says Tama-Sweet, the son of hippie atheists. "I really didn't imagine it was a problem here. It just doesn't fit the idea of what Portland is."

That idea—of green parks, copious bike lanes, and a bubbling arts scene—recently landed Portland the tagline, "Where young people go to retire." In 2005, Tama-Sweet and his now wife left the grimy City of Angels for the City of Roses. Stephanie had just completed a master's in intercultural studies at Biola. The couple had considered missionary work in the 10-40 Window, but Portland's "sense of optimism and opportunity" drew them, says Tama-Sweet. "It attracts a lot of young people who want to change the world."