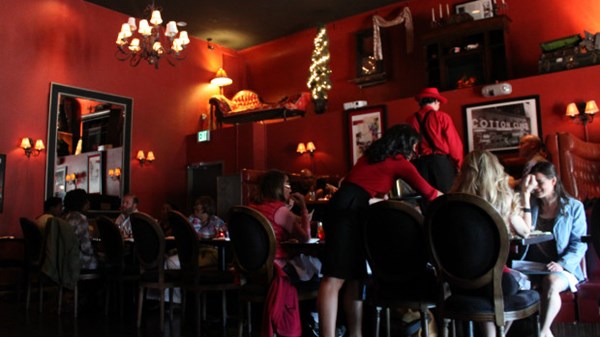 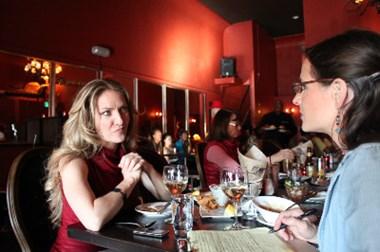 "I had never been incarcerated. I didn't know how many children are basically born into it. Many of their dads are in jail, they're dealing drugs to help support their families, and mom looks the other way when they give her money. It's a cycle. That innocent, hopeful kid who might have dreamed of being a fireman doesn't even know to have those dreams."

Goines wanted to create a safe place that didn't depend on government funding. The kids she knew were committing crimes out of economic poverty. Yet they couldn't get jobs because the tough front they'd put up to survive—along with their criminal record—made them unemployable.

Then Goines started thinking about the Bay Area, a culture of foodies who enjoy quality entertainment. A restaurant could provide the opportunity for these youth to become experienced and employable—not just as servers, chefs, or hosts, but also for jobs in office work, marketing, website, talent recruitment, and management.

Eight years ago, Cora Jean's Old Skool Café was born. For the first seven years, Goines ran it out of her home. She cashed in her retirement and savings, rented out every room in her house, and downsized in every way imaginable.

"It's been a long eight years," said Goines, who just recently began to take a modest salary. "But God is faithful and loves these kids more than I do."

In April 2012, the restaurant opened formally in Bayview, and has already started to affect San Francisco's roughest neighborhood. Old Skool's street was once called "Blood Alley." Today it is lined with street lamps, benches, and hanging flower pots along the plaza outside. People come from all over the area to dine and enjoy live jazz and spoken word. Goines knows the names of the locals who hang around outside. In turn, they make sure her patrons get to the restaurant safely. Goines herself lives in Bayview and was deeply involved in the community even before she started Old Skool.

Inside, the restaurant feels like a 1930s jazz club, with high, red leather booths, burgundy walls, dark wood, and staff dressed to the nines in fedoras and red and black suits. 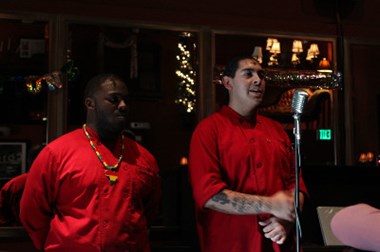 Staff lead an open-mic sesson. Public speaking is one of the professional skills taught at Old Skool.

Goines said it costs $108,000 per year to incarcerate a youth, but for a quarter of that she can provide them with life and job skills, community, self-confidence, and the support that keeps them out of prison. While Old Skool still depends on donations from churches and individuals, the long-term goal is to be self-sustaining. Goines dreams of opening other Old Skool Cafés across the nation and is fine-tuning a model that can be used for future ventures.

Youth come to Old Skool through referrals from probation officers, local churches, and current restaurant staff, who have brothers and cousins and neighbors who they want to help break the cycle of poverty and incarceration. After four months of training, they can apply to be staff.

"Some of them don't make it," Goines said. "I want to help everybody, but we don't help people if we don't hold them to a high standard. In the real world, you don't get to make excuses to keep a job."

Goines, who had no prior experience with food service, solicited help from fine-dining restaurants Dobbs Ferry and The Slanted Door, and is partnering with restaurants that will allow her staff to do externships to learn from masters. You can taste the results in Old Skool's tantalizing, tapas-style soul food that includes everything from ceviche to macaroni and cheese—all of it delicious and beautifully presented.

"The reviews are in. The food is good. The youth are inspiring," said Huffington Post writer Sonya Denyse in reference to favorable reviews from Edible San Francisco, CNN, Fox News, San Francisco Gate, and elsewhere. Diners seem to agree; Old Skool has a 4.5-star rating on Yelp, Open Table, and Trip Advisor.

But Goines says that Old Skool's real magic is its culture; instead of a program, it's run like a family.

"What changes people is God's love. It's them knowing that they matter, that they have something to contribute, and that they're trusted."

The restaurant's culture—and its name—is a tribute to Goines's 78-year-old mother who spent a lifetime serving Goines's handicapped father and grandmother, and modeling a faith that seeped into everything she did.

"She never preached," Goines said of Cora Jean, who is still living. "She poured so much love into me that I felt like I had love to give."

Goines extends that love to the 150 staff members who have come through the program, but she's also started an adopt-a-chair program. Patrons can make a financial contribution and then commit to praying that the people who sit in "their" chair would feel God's love. Goines hopes to someday have every chair prayed for.

Even with its short history, Old Skool has some impressive success stories. One young man who was on probation for selling drugs is now a chef and manager. Another young woman is saving up to buy her first home in one of Bayview's new condominium complexes.

"I never thought I was going to graduate," Jeremiah, a recent high school graduate, said eloquently at the mic. "Now I'm ready for a new start."

"They're wonderful. They're my kids," says Goines, glowing with pride. "What would you not do for your own son or daughter? If we start to see the kids on the street as our kids—if we show them they are precious, that's when change can happen."

Laura Joyce Davis is an award-winning author based in Oakland, California. She has written for This Is Our City about anti-trafficking activist Betty Ann Boeving. Read more at LauraJoyceDavis.com.