Read as Single PagePage 1 of 2 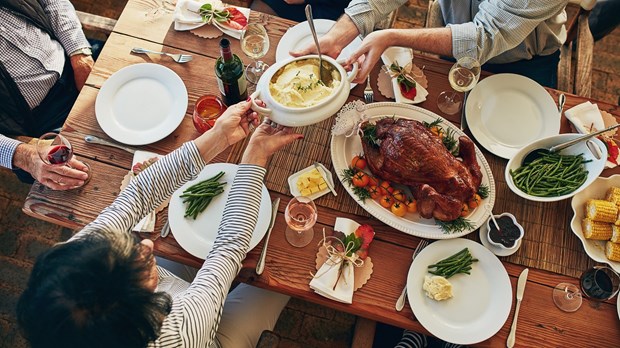 Thanksgiving: that time of year when dreams of stuffing, jello molds, and bean casseroles reign supreme. The season for finding a circle of people with whom to give a toast, say a prayer and give abundant thanks. Momenta to reminisce and recall God's provision, even in hardship. A holiday filled with good practices for us frantic Americans.

And while I honor these traditions and believe the sentiment behind this holiday is so very close to the heartbeat of God, I will confess to getting more than a little bit bored by all the chatter about giving thanks this time of year.

I suspect I am not alone.

There are only so many times one can see the same greeting card and hear the same clichés poured out everywhere from the mall to church. "We have so much to be thankful for." "Let us give thanks." "I'm so thankful for (fill in the blank)."

All good reminders, but like speed limit signs, when you see them all the time you start to just zip past them.

To remind myself of God's abundant provision, and in an attempt to jolt myself out of my bored self-indulgence—and to prepare for a sermon I'm giving Thanksgiving morning—began reading Luke chapter 17 last week. Here we find the story of 10 men with leprosy who Jesus decided to heal. They did not necessarily deserve his healing touch. Nowhere in this story do we get a sense that they had great faith or wisdom that begged for this miracle.

Nope. Jesus just did his thing, he healed out of the love and abundance in his own heart. Not because they were deserving, just, or particularly charming. He healed because it was his desire to do so.

And as human nature would have it, nine of these men walked away with their gift of healing and did not look back. Only one had a heart that spun around and said, "Thank you!" To which Jesus gave an even greater gift: the affirmation of his faith.

Most people come to this story and brush off the other nine just as they brushed off Jesus. Most people will look at the 10th man (and rightfully so) and lift him up as an example, as the image of a proper posture toward God. Which he is.

But I want to pause and take a look at the other nine. If my shot at statistics is right, this story reads a little bit like this: 90 percent of the people who receive from God may (or may not) ever look back over their shoulder to say "thank you." I dare say, if I were one of those 10 men, I'd likely land among the 9 walking away.