Word War, Religious “Nones,” a Leap of Faith, and a Nobel Prize 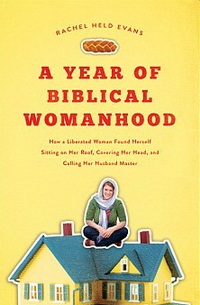 A Year of Biblical Womanhood, the new book in which popular Christian blogger and writer Rachel Held Evans charts her attempts to follow all the Bible's instructions for women, made news this week when LifeWay bookstores announced they will not carry it. The chain objects to the use of the word "vagina," which Evans' editors at Thomas Nelson urged her to remove to avoid offending Christian booksellers. After readers found out about the request, via an Evans blog post in March, they petitioned the author to put the word back in. She did, and the chain will not carry the book in any of its 160 bookstores.

In response to the controversy, Evans said, "I often hear from evangelical leaders, ‘Oh we're really eager to have more female leaders.' I want to say, ‘This is my voice. This is what it sounds like.'" While conversations may begin with whether LifeWay made the right decision, or whether Evans should have removed the word to avoid offending more conservative readers, they can provide an opportunity to move toward a dialogue about what it means to be a Christian woman in the public sphere.

"Vaginagate," as it has come to be called, has brought Evans' book to the attention of people who might not otherwise have encountered its ideas—while the narrative playing out in the media is on its face frustratingly familiar (look at the ridiculous Christians arguing over a silly word!) it opens up the possibility of a real discussion about what the Bible really does say for and about the role of women in the church and the world. You might capitalize on the interest the stories have drummed up by organizing a book club or Bible study that uses Evans' book as a starting point for study on the subject.

Nones on the Rise

But these "nones" have some surprising beliefs and practices. Two-thirds of them say they believe in God (68%). More than a third describe themselves as "spiritual" but not "religious" (37%), and 21 percent say they pray every day. Most think that churches and other religious institutions benefit society by strengthening community bonds and aiding the poor.

If churches and ministries want to reach these "nones," it will be through practices rather than beliefs. Nearly all "nones"—88 percent—say they are not looking for a religion to fit their beliefs. They see religious institutions as too concerned with money and power, too focused on rules, and too involved in politics. For many, the church has become the primary barrier to a relationship with God—this is a failure, a massive one, on the part of the church to reflect the glory of God. This is not news for most who work in the church and have regular conversations with those outside the faith, but it should sound the alarm that the need is now more pressing than ever to consider ways to refocus the church's attention on who Jesus is and what he offers the world. 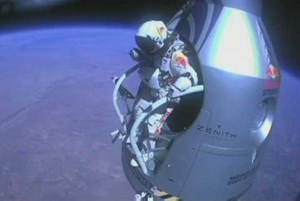 More than 8 million people watched live as Austrian daredevil Felix Baumgartner jumped 128,100 feet from a balloon at the edge of space to the New Mexico desert, in the process breaking both the record for highest jump and the sound barrier. He reached speeds of 833.9 mph on his 24-mile descent.

The jump captivated millions of viewers, many of whom watched via live stream on YouTube. While many tuned in to witness history being made, others simply sought the spectacular. Feats like Baumgartner's jump remind us that something special happens when we push toward that which seems impossible.

This type of thinking captivates us and inspires us to push past the preconceived limits we have drawn in our own lives and ministries. In ministry, especially, this temptation can be great. When the monotony of administration strings weeks into years, we begin to operate in maintenance mode. But this type of thinking does not push anyone toward growth, which is the task of a leader. We don't have to jump out of planes to inspire people, but take time in the next week to question the limits others have drawn before you and consider how you might break those barriers that keep your ministry from jumping as high as it could.

The Nobel Committee awarded its annual Peace Prize to the European Union, recognizing 60 years of peace on a continent torn apart by two wars in the 20th century. The award comes at a critical time in the institution's life, as financial crisis and political unrest threaten Europe's stability. Many commentators see the award as a symbol of hope, in an attempt to bolster the EU's efforts to come together to address its growing problems at a critical time.

Whether the Nobel Committee's push serves its purpose, we will not know for some time. But as leaders, and leaders of leaders, this decision presents an intriguing model for motivating those we lead to face difficult tasks with confidence. While we often—logically—wait until a task's successful completion to recognize and reward its laborers, the very largest challenges may prove so daunting that people give up before they even begin. Sometimes people need to know that someone believes they can do it in order to believe it themselves. Think of people in your ministry who have demonstrated success in the past but may need a push to make it over the next hurdle. How can you boost their spirits and push them on toward success?

Laura Leonard is the associate editor of Building Church Leaders at Christianity Today. You can find her on Twitter @lmarieleonard.

Word War, Religious “Nones,” a Leap of Faith, and a Nobel Prize

END_OF_DOCUMENT_TOKEN_TO_BE_REPLACED

Men and Women Working Together
END_OF_DOCUMENT_TOKEN_TO_BE_REPLACED