“The Mysterious Third Nipple” and other horror stories 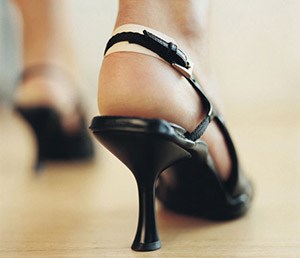 At a recent ministry event, I seized an opportunity to test out my favorite new party trick among clergywomen.

"I'm just curious," I queried, "if anyone has had a professional wardrobe malfunction…"

Though the term was officially coined by TV execs in the wake of the 2004 Super Bowl fiasco, as an attempt to explain Janet Jackson's accidental exposure, clergywomen have been well acquainted with other variations of the common malady for…ever.

I'd long suspected these stories were out there, based only on my own fashion debacles: the inch of wrapped tampon sticking out of the breast pocket of a dark denim jacket before a college chapel service; catching a weighty falling gold earring, with my catlike reflexes, during a Scripture reading; chucking an unwieldy red headband under the pulpit mid-sermon; and, of course, terrifying innocent worshipers by swooping into the women's restroom robed like Darth Vader.

When my colleagues chimed in with their own stories, however, Vader-gate suddenly seemed like a fun day at the Super Bowl.

One denominational executive offered, "The crotch of my hose had slid down to my knees, so I had to waddle out to the communion table like a penguin."

The Penguin received a round of knowing nods.

"While I was preaching," another offered, "my pantyhose had fallen all the way to my ankles."

Now it was getting fun.

"I kept preaching, slipped off my shoes, wiggled out of the hose, and put my shoes back on. Then I realized the choir was behind me and saw the whole thing."

These vignettes only confirmed my long-held suspicion that pantyhose are of the devil.

Being Great With Child

The women who had been pregnant pastors sounded like the most miserable among all women. Yes, it's heartwarming for your prego clergyperson to read Mary's Magnificat while dressed in a tent—or robe…whatever they're calling it these days—but Mary didn't have to deal with something I'm discovering are called "pulpit shoes." While my preferred pulpit shoes would be red Converse high tops, my fashionable diva friends seem to wear sleek stylish heels to deliver the Word.

If you can believe it, bloated pregnant women no longer fit into these death traps.

One, confident her duties would keep her behind the reliably obscuring pulpit, wore fuzzy pink bunny slippers in worship. Her secret was safe until she walked down the aisle.

Another expectant pastor, who keeps her "pulpit shoes" tucked in her office closet, found that—like Cinderella's devious stepsisters—she could no longer squeeze her fat sausage-feet into them. (These "pulpit shoes" sound, to my ear, as horrible as walking around on…glass. Really, Cinderella?) In a pinch, she was forced to preach in flip-flops. Thankfully, they were a nice liturgical black.

When one woman was, like, 27 months pregnant, she was providing pastoral care at a Catholic hospital. At five feet high, and just as wide, she wore a white-tabbed clerical shirt. One unsuspecting older gentleman glanced up from his sickbed and, without thinking, greeted her, "Hello, father."

This one, technically not a wardrobe malfunction, actually did afford her an accidental respect of authority.

Laura—name changed to protect ministerial standing—typically wore a thick black robe, in a church she describes as "super-formal." No air-conditioning. In Michigan. In July.

I think you can see where this is heading.

After one summer wedding where, bending over bride and groom, she'd poured sweat all over them and their shiny new rings, Laura was fed up. At the following week's nuptials, she was prepared with a plan.

With a happy glimmer in her eye, Laura explained to us, "I wore my panties and just my robe."

The multi-staff church was so formal, there were actually regulations about how and where to hide the base of the cordless microphone.

Laura, awkwardly clipping hers to the fabric of her robe, simply assured the concerned senior pastor, "Just trust me. It's not going to work today."

After she shared with our group, one baffled colleague queried, "Didn't you have that class in seminary where they suggested you always have a collar peeking out of the robe, because men imagine you're wearing nothing under there, anyway?"

The round of silence and horrified looks suggested that none of us had taken that weird class.

Truly, so much of clergywomen's agony does come from (cue horror soundtrack) the dreaded cordless microphone.

Once, unrobed, I glanced down and wondered why I had a third nipple. Daring to squeeze it, I realized that the mic's foam cover had migrated down my shirt and taken up residence near legitimate Nipple 2. Case solved.

The bigger hassle, as Laura discovered, really is where to clip these things on Lady-Clothes.

One innovative dress-wearing clergywoman, without a place to clip hers, simply removed her pantyhose (on purpose), tied them around her waist, and clipped her mic to them.

Though the solution was a success, she'd forgotten about it by the time worship had ended, and she dropped the mic on her desk and hung up her robe.

While she was mingling in the fellowship hall, her daughter whispered, "Mom…mom…"

Engaged in ministry, the mother ignored her.

This went on for awhile before the mother scolded, "Hush, child, I'm talking!" (#southernmama)

By that time, the daughter was happy enough to huff off with a "Fine! But I'm not the one wearing pantyhose around my waist!"

That had to have been a little satisfying.

I actually have this fantasy about appearing on ABC's Shark Tank to pitch an innovative new line of clothing for clergywomen.

• Sturdy lapel, to secure microphone. There's a reason they don't call them brassiere microphones. (Note to self: The Brassiere Microphone.)

Margot wants to hear your stories! Yes, she wants to know if anyone in your congregation has ever stroked your hair and cooed, "I love that you wear your hair back. I wish my granddaughter would." And she also wants to hear about the liturgical banner that fell on the organist, the denominational meeting gone awry, and the Sunday you ran out of bread before you finished serving communion. If she likes your story, she'll feature it in an upcoming post.

Send your horror stories to Margot at this address: clergybloopers@gmail.com.

Margot Starbuck is the author of the recently releasedSmall Things With Great Love: Adventures in Loving Your Neighbor. More at www.MargotStarbuck.com.

END_OF_DOCUMENT_TOKEN_TO_BE_REPLACED

Women of the Bible
END_OF_DOCUMENT_TOKEN_TO_BE_REPLACED