God has a plan for everyone, even broken and hurting people like me (and you)
Read as Single PagePage 1 of 2 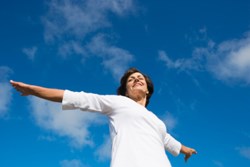 Most of the last two decades of my life have been spent as the "odd woman out": out of love, out of hope, and out of control. As the "odd" one, I found myself either ignored by others or noticed, but regardless, I found pain waiting for me. Thankfully, I did not remain "out." God's mercy, hope, and love found me, leading me to become the "odd woman in."

Webster's Dictionary defines odd as "different from what is usual or expected." As a 9-year-old little girl, I certainly was odd and so was my life. Having lost my father, and my mother being emotionally unavailable, my 9-year-old heart and mind were left to figure out life and love on their own. While friends played with Barbie dolls or spent an afternoon playing dress-up, I spent the day creating ways to have people notice and love me—even my friends' parents. This pursuit continued throughout my life. In fact, this pursuit became a way of life for me.

Although I became a Christian in the eighth grade and was called to ministry at 16, my mother and I had a very strained relationship. Our time together was worse than any war. We said words that were as devastating as any bomb could be. I finally graduated high school and went to college at a Christian university to pursue my life in ministry. While at college, I found some healing for myself, but more important, my mother and I found healing for our relationship.

My senior year in college, God decided to end our feuding. I woke up one morning longing to be at home with my mother. I could not understand the urge and tried to fight it, but God won. I went home and for the first time, my mother and I talked about our hurt and, for the first time since my father's death, talked about his death. I am so thankful God intervened so strongly. Two years after that moment, I found myself the odd woman out again as my mother succumbed to cancer. At 24 I had no one.

Desperate for love and hope, I clung to anyone who entered my life. Unfortunately, I entered my first abusive marriage, followed by divorce and a second destructive marriage and divorce. After my second divorce, I turned my back on God. To me, I was the odd one God never wanted. I convinced myself that if there were a God, he wouldn't allow me to face such loneliness, rejection, and heartache. Life without him certainly would prove to be better, or so I thought.

I lived a life void of God for two years. In my world, I was finally "in." I had everything I wanted and could not have cared less about what God or anyone else thought. I felt free. Then it happened again. I entered another abusive relationship.