Lead Me On: For We Who Look Around

Do what is yours to do 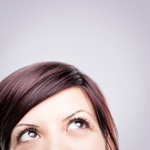 A fairly famous point-the-finger-in-blame moment started the day Eve handed Adam that piece of fruit and said, "Go for it."

The text doesn't say that he resisted. At all. It reads like this: "Then she gave some to her husband, who was with her, and he ate it, too" (Genesis 3:6).

Possibly they were honeymooners at that point, so maybe she was really nice about it. "Honey–go for it."

Or maybe she was grouchy and from her tone he thought he'd better do it or else. "No, seriously. Go. For. It."

Whatever the case, he ate. And later he looked around for somebody to blame.

Then God said, "If she had handed you a toilet bowl brush, Adam, would you have scrubbed the bathroom?"

Or, according to the King James version, "And unto Adam he said, 'Because thou hast hearkened unto the voice of thy wife, and hast eaten of the tree, of which I commanded thee, saying, Thou shalt not eat of it: cursed is the ground for thy sake; in sorrow shalt thou eat of it all the days of thy life'" (Genesis 3:17).

In other words: You do the crime, you do the time.

In other words: Point the finger all you want, but God holds you accountable to do what is yours to do.

In other words: Stop looking around.

I have two young kiddos in my house who regularly play the "She did it firrrrst!" or "He always does that to meeee!" game.

Which gets super annoying because ... I do the same thing. It looks way better when I do it. Logical. Justified even. Actually, I look a bit stupid when I DON'T do it.

When someone else is slacking off, messing up, behaving badly, basically eating the fruit RIGHT IN FRONT OF MY FACE–I'm supposed to blah blah, keep doing what is mine to do? Not retaliate? Not, um, join in? Who has the nerves of steel needed to stand like that?

It might encourage you to know: nobody. Pretty much. Especially in the Bible. Especially among the major cast and crew.

When Jesus had come back to life and stopped by to see the apostles and gave them an incredibly personal miracle with their nets and fish and said forgiving, then kind, then prophetic things to Peter, Peter said something to Jesus that was amazing.

Peter said, "Um. Well. What about that guy?"

This is also known as Jesus' version of "Stop looking around. Do what is yours to do."

Because everybody else is none of my business?

No. Because you have all you can handle right now with your own self. The harvest is plentiful. It's the workers that are few. Do what is yours to do.

What is ours to do isn't likely to fit in with a tidy sitcom-style tie-it-up-in-a-bow closing sentence or two. It might not be easy banter for dinner parties. It might not be entirely clear except to us and our God.

That's why it's ours to do.

This journey is a lot of work. Don't let a piece of fruit get you distracted. What is yours to do will just be waiting for you after you've taken the bite. Distractions come with consequences and you'll be all, "Great. That's just GREAT. Add that to my list of things to work in before the weekend."

Stop looking around. No pressure. But just ... stop it.

You'll go forward instead of backward, which would be handy for me because then I might be more likely to do it myself.

Janelle Alberts is a freelance PR and media relations specialist and has managed communication needs for clients such as Microsoft, Wells Fargo, and UPS. She started her first religious column in 2010 for the Akron Beacon Journal and has since written for Atlanta Parent Magazine, Christianity Today's women's online sections, and Catholic News Service among others.

Lead Me On: For We Who Look Around

END_OF_DOCUMENT_TOKEN_TO_BE_REPLACED

Does the Bible Really Say I Can’t Teach Men?Meet Sexual Sin with Truth and GraceThe Strong Power in Every WomanHow Churches Benefit from Co-Pastors