Part 3: Raising Up Women for Ministry Leadership: Tales from the Trenches

When I resisted handing the reigns to others, I risked worshipping the ministry rather than the Master. 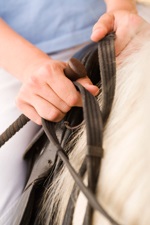 There is no job security in the Kingdom. Jesus promised we'd have both trouble and blessings. He said that we could ask and receive. He told us not to be fearful or anxious. In fact, Jesus had a great many things to say to his followers–but not once did he guarantee tenure to those who were doing Kingdom work.

If we truly want our efforts to have a spiritual impact, the where, when, and how of that work must be left entirely up to God. Yet all too often, extended service in volunteer leadership can result in spiritual value being derived from works rather than Christ.

This is not to suggest that there aren't innumerable ministry leaders out there who approach their task with reverence. In some cases a volunteer leader could even serve for decades and be a shining light for the Lord. Nevertheless, a time will come when the torch must be passed. Has this person raised up new leaders? Has she prepared the team to continue on without her? Or has a hint of pride crept in between the accolades? Perhaps there's even a secret fear that she will be forgotten.

It is vital to the health of any church ministry to understand that the Lord may call his leaders on to something completely different at any moment. When this moment arrives, there must be a willingness to release the reins to those who have come up after us and step aside. Should we resist and dig in our heels, we enter into the dark territory of worshipping the ministry rather than the Master. We have taken ownership of God's work.

It was this very territory that I had ventured into unawares.

After months of working shoulder-to-shoulder with the women's ministry leadership team as they healed, visioned, and strategized, the time had finally come to help them implement their plan of action.

By collectively resolving to take turns being the point person on a specific initiative while the others offered support, they were each given the opportunity to spread their wings as leaders.

Their first attempt out of the gate was a day of prayer and fasting for the children in our church and local community just before the school year started up. This was something completely new and the key leader was understandably nervous.

The team kept in continuous contact with her, offering valuable insights and support, while I guided her through the various "checkpoints" of planning and executing this type of project.

The day arrived and we had a fairly good turnout. But the tendrils of a critical spirit had begun to creep into my thoughts. A couple of minor things weren't as organized as I would have liked. I wanted it to be run a certain way. I wanted it to reflect well on the women's ministry.

In point of fact, the day was a great success and God used this wonderful sister mightily to impact the folks who came out to participate.

Still, afterward I felt oddly disgruntled and sought clarification from the Lord. The revelation he gave me was painful to receive but undeniably accurate.

God's children are designed to serve. If we are not working for him, our faith can languish and grow dim. This is why it's so important to provide volunteer opportunities in the church.

Yes, in some cases, these opportunities can include mopping up floors after a luncheon or preparing the pews before service. However, if you're in a position of leadership and you keep your thumb on these people while taking all the "spotlight" roles for yourself, I assure you it is not God you are working for.

Although we are Christian leaders, we are also human. Just because we get a checkmark beside serving "God" rather than "mammon" on our spiritual report cards doesn't mean we don't slide over to the other side when our egos rear up.

This was exactly what had happened to me. I left that day with a dual mind–on the one hand I marveled at how God showed up through this budding leader and the prayerful participants, but on the other I was struggling against my own graceless, pride-filled thoughts.

I was on a precipice, teetering on the fence between wanting to delve more deeply into fulfilling the Lord's vision for this ministry and releasing it utterly into the hands of the team.

Not certain what to do, I brought my confusion and wrestling before God. I loved these women. They were my sisters, my little chicks, my dear ones. They had worked so hard at coming to this place of spiritual health as a team and I didn't want to see it fall apart. Just a little longer, I reasoned. Yes, they're out of the nest, but those wings are still a bit wobbly. They need me.

This was the case I presented before the Lord. His answer was immediate and crystal clear. They didn't need me, they needed him. He had never commissioned me to run this ministry, he had assigned me to help them heal and bond and learn how to vision. He had assigned them to run the ministry.

And then the Lord pricked my conscience with the real issue–was I concerned that others would think my efforts to restore this team were less than stellar if they didn't do everything perfectly all the time? Was this about my ego? My reputation?

Ouch! My love and loyalty toward the team were morphing into possessiveness and superiority. The very things that would throw these wonderful women back into the turmoil they had worked so hard to overcome.

After a period of genuine repentance and refocusing my priorities, I faced the truth. I'd accomplished the task God had given me to do. If I tried to cling to my role, good intentions or not, I would become a hindrance to these women and the ministry.

The time had come to let go.

One of the final tests I experienced when releasing this team was the temptation to exit with speeches and fanfare.

Given how close we'd become, it was easy to imagine that we'd have a big teary-eyed hug fest and they'd all say it wouldn't be the same without me.

Recognizing that to do so would place emphasis on my leaving rather than their moving forward, I simply met with each of them quietly, slipping in the news that God was calling me to step back between discussions of Bible studies and outreach breakfasts.

As the pastoral team member assigned to shepherd this ministry, it wasn't a full extraction. Rather, I placed myself at arm's length to provide overarching guidance periodically.

So what happened to this team? Did they suddenly grow the wings of eagles Isaiah wrote about and soar? Yes and no. Ministry is trench work. It is the day-to-day facilitation of Kingdom activities in church classrooms rather than the grand view of marching across the globe for Christ.

As this was their first "new" year together, there were a few adjustments along the way. But they remained consistent and united. They stayed close and open to each other's input. They continued to plan and vision and...most important, be receptive to the Lord's leading.

I started out this journey reluctantly and on my knees when God called me into the fray of tackling the women's ministry, and I ended the very same way when he called me back out again some months later.

Somewhere in the middle, though, I was awarded the privilege of watching these leaders rise from the rubble of a battered ministry team to become the sisters and workers God had called them to be.

My final piece of advice for those attempting to raise up a volunteer leadership team is simply this: hold on loosely, seek the Lord at every turn, and expect to be the one who gets transformed.

Part 3: Raising Up Women for Ministry Leadership: Tales from the Trenches

END_OF_DOCUMENT_TOKEN_TO_BE_REPLACED

Women of the Bible
END_OF_DOCUMENT_TOKEN_TO_BE_REPLACED