Raising Up Women for Ministry Leadership: Tales from the Trenches, Part 1

For my group of women leaders, the real challenge was not getting to a place of vulnerability; it was going beyond 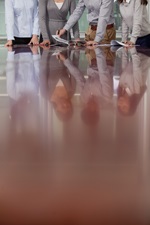 Vulnerability. Transparency. Authenticity. Words so trail-blazing a scant decade ago are now on the verge of becoming little more than the latest ingredients in a cookie-cutter formula for producing modern-day Christian leaders.

Why would I make such an audacious claim? Because these terms are so ingrained in the day-to-day language of current church development that we're losing sight of the fact that how these God-honoring truths are applied is far more important than merely applying them.

Getting raw and real isn't a one-size-fits-all leadership track where we encourage everyone to admit they're flawed, pat each other on the back for being honest, and sing contemporary worship songs to drive home the point that we're different from previous generations.

Never is this need for distinction so clearly evident as it is when raising up a women's ministry team.

Although the triune concept of vulnerability, transparency, and authenticity may be a relatively new approach to ministry leadership, women have been battling against these tendencies for decades. For numerous years we've been taught that vulnerability in particular is a close cousin to that killer of female success in ministry–emotions.

Of course, we have excellent role models for how to be both strong yet vulnerable women of faith, through the likes of such teachers as Beth Moore, Joyce Meyer, and others, but these examples are at the 50,000-foot level.

Does that same winning combination translate down in the trenches of day-to-day ministry?

As I discovered firsthand, getting women in leadership to travel to the land of vulnerability was never the real challenge. Guiding them to uncharted territory on the other side was.

When the Lord called me to step into the gaping leadership hole left at the heart of our church's women's ministry, there were two vital truths I carried with me–ministry is tough and women cry.

Due to a staffing shortage, the women leading this ministry had been left without an assigned pastor to shepherd them for some time and were now reaching a critical mass. The battle for internal control was crippling their ability to produce fruit for the Kingdom.

God called me to wade into these troubled waters in no uncertain terms. I'd be lying if I said I didn't give it a second thought. I had enough on my plate as the pastoral team member overseeing administration and operations, as well as developing a growing marriage ministry team.

But the Lord called and I obeyed. I didn't enter in strategizing about how I could be an authentic person or show my vulnerable side. I didn't fret about what they would think or how I would come off. I dove into the fray on my spiritual knees, begging him for wisdom, grace, and discernment. I simply trusted God to sort it all out. I understood that I was just one of his vessels, and whatever was in me that needed to come out in the process of helping these women grow as leaders was his to use.

Down to the Bones

With a delicate balance of authority and empathy that was impossible to achieve without God's anointing, I had to peel back the shiny happy Christian veneer these women were trapped under to reveal the festering wounds beneath.

Three of the leaders lunged for the exit over the next few weeks.

Five stayed and the process of wading through the ashes of what once was began.

The very first thing God led me to do was tell these women my story. I told them about the struggles I'd had and the mistakes I'd made and even how in my current role I messed up now and again and was continuously thanking the Lord that he never left my side. I told them that there was no earthly reason why a former teenage mom with a sordid past should be in a position of leadership and trust in a prominent church.

I wasn't the one who needed the release–they needed it.

As I stepped back and let the five of them begin to pour out their hearts to one another, a beautiful and uniquely female moment emerged. One began to cry and four hankies were immediately drawn from various purses. Four hands offered these little white gestures of grace in perfect unison.

I have dubbed this the "four-hanky rule" for raising up women in leadership. No matter how much discord there may be among sisters in the Lord, a hardened heart is only four hankies away from becoming soft and useable once again.

My joy at witnessing this profound and healing turning point for the team was so overwhelming that it was all I could do to cling to my composure.

In the majority of cases, women tend to be more emotional than men. So when we really open up we can get lost in the wilderness of our feelings.

This was the predicament I was facing. To be able to share so candidly with my sisters and then witness them reaching out in love when emotion overwhelmed one of them was such a tender experience that I was teetering on the precipice of a full-blown warm and fuzzy, let's put on pajamas and watch chick flicks all night moment.

A man raising up men can go deep into the land of vulnerability with his team because it is typically a foreign place to the ones being led and so they're quite able to venture out again.

A woman raising up women does not have this luxury. Vulnerability is our home turf. This isn't where we vacation in the summer; this is part of our interior landscape 24/7. So when we realize we're in a safe place and can let that inner reality out, the relief can be so overwhelming that it will readily overtake our original goal–to show our sisters not only how to use this home court advantage with discipline and focus, but to come out of it as stronger leaders.

Had I caved into the genuine vulnerability I was experiencing just then and been completely transparent with my sisters rather than reign it in, they would have enfolded me into their loving circle and the task God had set before me would have gone right off the rails.

Although there is more to the tale of restoring these beleaguered leaders than a couple of meetings and heart-warming hankies, suffice it to say that my greatest lesson learned was this: following God's direction and being equipped by him is the only time-proven strategy to success in raising up spiritual leaders. The moment that we reduce His methods to a quick solution, cool slogan or pat formula, we wind up hobbling the very ones we've been called to release.

Raising Up Women for Ministry Leadership: Tales from the Trenches, Part 1

END_OF_DOCUMENT_TOKEN_TO_BE_REPLACED

Women Leaders in the Bible
END_OF_DOCUMENT_TOKEN_TO_BE_REPLACED