The Promise of Church 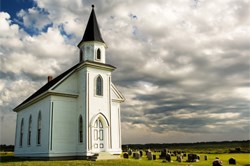 In Confessions, Augustine tells the conversion story of Marius Victorinus, an honored philosopher in ancient Rome whose statue stood in the Roman forum. Before his baptism as a Christian, he had vigorously defended the idolatrous Roman cults. After his study of the Scriptures, Victorinus was converted, though he did not immediately pursue membership in the Christian church. "He was afraid to offend his friends, proud devil-worshippers," Augustine concluded.

Victorinus did, however, privately announce his conversion to Simplicianus, a church leader. "Did you know that I am already a Christian?" he asked eagerly.

"I shall not believe that," said Simplicianus, "or count you among the Christians unless I see you in the Church of Christ."

This is a strange story for evangelical ears. Today we can hardly imagine refusing recognition of someone's sincere confession of faith or making salvation conditional upon church membership. Yet 1600 years ago, this was an agreed-upon formulation of obedient Christian faith: if a person wanted to follow Jesus, he or she belonged to the church.

Seismic shifts in thinking have occurred between Augustine's day and ours, not least of which is the emphasis on the individual rather than the collective. Today we're tempted to privatize our faith. Church membership is presented as one of many appealing choices in the spiritual growth cafeteria line, participation in a local church as optional as pie. Spiritually, there's no real sense of need for church, only preference.

How did something, understood 1600 years ago as so critically important, become so ancillary? Maybe it's less important that we understand how that happened and more important to recover our commitment to the church. Is she not the one whom Jesus loved enough to die for (Ephesians 5:25)?

Perhaps we should begin by saying that although church is important, it is never easy. "How wonderful and pleasant it is," wrote the psalmist, "when brothers live together in harmony" (Psalm 133:1). He may as well have added, "How nearly impossible!" Unfortunately, there is no vestiary for vice at church. We don't check our sins at the door on Sunday morning. Instead we drag rivalry, selfish ambition, pride, and ingratitude behind us, making room for them in the pew.

No, we don't go to church (and keep going) because it's easy. We go because it's necessary–because, as Eugene Peterson has written, "No Christian is an only child." When we declared our allegiance to Jesus Christ, like it or not, we became a part of his family, binding ourselves to the domestic responsibilities to love and to serve our spiritual fathers and mothers, brothers and sisters. The Apostle Paul said church is like marriage, and in my estimation, that means there's a lot of ordinariness to it (and not too few fights). And yet, as in marriage, there is great promise of transformation in church. When we dare the difficulty of abiding the promise to love unlovable people in the everyday, we are being formed into the image of Christ.

The Promise of Church

END_OF_DOCUMENT_TOKEN_TO_BE_REPLACED

Men and Women Working Together
END_OF_DOCUMENT_TOKEN_TO_BE_REPLACED