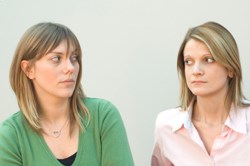 Christian leaders struggle with all sorts of temptations. We fool ourselves if we think otherwise. It's how we handle those temptations that determine whether or not lives will be destroyed.

Often when we think of Christian leaders and their temptations, we think about the so-called "big" sins, those usually having to do with sexual immorality. But there are many more temptations than meet the eye—temptations to commit respectable sins, or sins we're prone tolerate, as Jerry Bridges notes. These are often sins that are easier to hide, at least initially. One not talked about nearly enough is envy.

When we envy people, we believe something they possess, or something we think they possess, makes them superior to us. Not only do we want what they have, we want to outshine them. Maybe it's…

• a bevy of opportunities

It need not be one thing; it could be a combination of traits and characteristics that we envy. In her book Glittering Vices, Rebecca Konyndyk DeYoung says envy is the sin of the "have-nots," that is, people who feel like they are lacking whether or not they actually are. The issue here is not poverty; rather, it's a matter of so badly yearning for what others have that without it, we feel inferior. Their success, or perceived success, makes us miserable.

Perhaps we believe they're undeserving of these gifts and we're the deserving ones. We're the ones who've been faithful to God and who are more competent. We're the ones who've had to scrape by, working hard just to get what little we have. We put in so much effort with little payoff. They, on the other hand, they've had it easy. Why are they prospering when they've done very little, they haven't been good stewards, and they have wrong-headed theology? Why are they the favored ones? Doesn't God see the good work we are doing for him? "It isn't fair! It isn't fair!" we cry.

Envy has us acting the part of the older brother in the parable of the Prodigal Son—even if no one around us has a clue. We cross arms. We sulk. We throw a pity party for ourselves, refusing to rejoice with those who rejoice. We feel as though God has kicked us to the curb. We may even attempt to underhandedly sabotage the objects of our envy. What we are doing is refusing to listen to the Father's voice telling us, "Everything I have is yours" (see Luke 15:31).