Lead Me On: Mouthy Mistakes 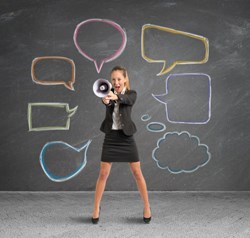 I talk too much.

Sometimes I could stand to zip it. I'm working on it.

However, I hate to contribute to what has been a common refrain in society–a common refrain also in some churches. The refrain goes like this: women might need to PIPE DOWN already.

God's opinion on the matter appears to have a refrain more like this: Do not neglect to use your voice.

If ever a story demonstrated that the clear voice of women matters to the God of the Bible, it would be the story of Pontius Pilate's wife.

Actually, there are a lot of stories. But in this one she really said something. And her husband really didn't listen.

It's interesting to me that her comments were included in the Bible at all.

"Just then, as Pilate was sitting on the judgment seat, his wife sent him this message: 'Leave that innocent man alone. I suffered through a terrible nightmare about him last night'" (Matthew 27:19).

Cue the music crescendo. These were the moments leading up to the cruelest, most tortured hours in the Christian story. Jesus was going to be killed and Pontius Pilate was about to turn him over to the people to start the process.

And his wife told him not to do it.

Remember the über-popular book called The Da Vinci Code? In my book club, we discussed author Dan Brown's fictional take on what got in and what got cut from the Bible, and his storyline about the monks who were allegedly excluding stuff about strong, smart women.

When faced with the story of Pilate's wife, even fans of Brown's books might be stuck with a one-liner retort like "Sorry, boys. You missed a spot."

I assume Pilate's wife had been instructed as a little girl and then many, many, many times throughout her life to be quiet.

But she is the one God used to say something to Pilate.

Renowned preacher Charles Spurgeon remarked on her boldness when he wrote in an 1882 sermon, "It shows a wonderful Providence of God that this lady was moved to send so strong a message to her self-willed husband–to beseech, to entreat, to implore–almost to demand of him that he let this just Man go."

The lesson sounds like one we have heard over and over: when it comes to societal rules or cultural norms or even stereotypically appropriate religious behavior, lean toward your inclination called IGNORE.

Instead, accept that we are all being called upon personally by this God to do something. If that, for you, is saying something, then pull a Pilate's wife and use your voice.

Our trick is not to confuse talking with voice. Having a voice is having a point. A purpose. Clarity.

Lead Me On: Mouthy Mistakes

END_OF_DOCUMENT_TOKEN_TO_BE_REPLACED

Men and Women Working Together
END_OF_DOCUMENT_TOKEN_TO_BE_REPLACED