It’s about who God is, not who we are
Read as Single Page
Page 1 of 2
Time to Stop Worrying 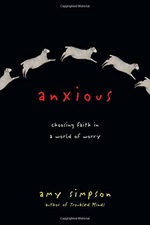 Anxious: Choosing Faith in a World of Worry

The sensational displays of God's power described in the Bible may seem to us as though they happened all the time, because they are collected and familiar. But like us, most people throughout history, even ancient history, never saw such faith-bolstering events. They believed based on the stories they knew and on their own experience of God in the mundane. The people whose stories are told in our Scriptures had plenty of reasons for worry, but God called them to be countercultural in living through trust in him. He calls us to do the same.

In many ways, we can relate to what these ancient sisters and brothers experienced. But in other ways, we can't imagine how difficult their lives were—just as they would not have been able to imagine the complexity of our world. In the face of such hardship, God told them to turn away from fear and worry and to trust him instead. It is not unreasonable to believe he wants us to do so as well. God cares as much about our faith and worry as he did about theirs. Worry is a tremendous obstacle to the bold and sacrificial life he has called us to. Like all sin, it offends God and impairs our relationship with him.

We, who are among the most comfortable Christians in history, have no business embracing fear and letting worry drain us of the strength God gives. It's time for us to repent of worry, recognize we can make a different choice, and pursue the frightening freedom and baffling peace of trust in God.

This is not about simply "handing our worries over to God"; it's about understanding how incredibly powerful and trustworthy God is, how much higher his ways are than ours, how ridiculous it is for us to cling to the illusion of control and the fear of what is small in God's view. It's about putting our concerns in their proper place, in relationship to God's concerns. It's about who God is, not who we are. It means taking seriously Paul’s instruction to “let God transform you into a new person by changing the way you think” (Romans 12:2).

Anxious: Choosing Faith in a World of Worry

END_OF_DOCUMENT_TOKEN_TO_BE_REPLACED

Women of the Bible
END_OF_DOCUMENT_TOKEN_TO_BE_REPLACED