Joan of Arc is a prophetic witness for us all.
Read as Single PagePage 1 of 3 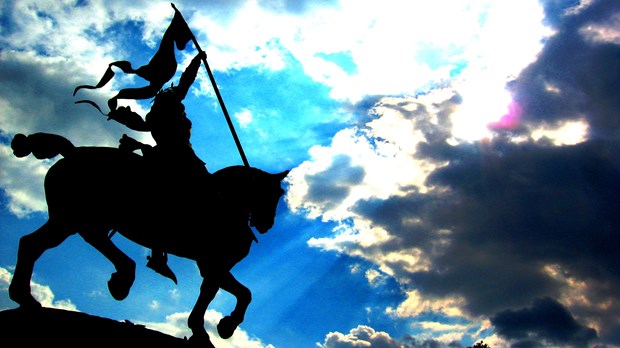 Despite all odds, an illiterate French woman born more than 500 years ago redefined bravery and contributed to the rise of King Charles. Jehanne, or, as she is now known, Joan of Arc, radically impacted European history and has inspired men, women, and children for generations.

For her first 13 years, Joan’s life followed a traditional path. She grew up in the Catholic church, helped her parents and siblings on their farm, and became proficient in the domestic arts. But as the Hundred Years’ War dragged on and England inched closer to annexing her southern neighbor, the ordinary nature of Joan’s life was forever altered.*

One afternoon when she was alone in her family garden, Joan was surrounded by a great light and heard “a revelation from God by a voice.” This voice told Joan to “be devout, to pray, to frequent the sacraments, and to rely on the Lord for help.” Over the next four years, these voices continued, culminating in a call to protect France’s sovereignty by making it possible for Charles, the heir to the throne, to be crowned King of France.

Joan had few examples of radical, female leadership to aid her crusade. During this time, women who wanted to follow Christ typically joined a cloister and devoted themselves to the humble and largely unseen work of prayer and service. This would not be Joan’s trajectory. As her calling became clearer, she seemed to understand that it would require a life of utter abandon to and dependence upon God. She made a vow of chastity, “as long as it should be pleasing to God,” and began to refer to herself as la Pucelle, or the Maid.

When English troops attacked and laid waste to her village of Domrémy in 1428, Joan felt spurred to action. With an entourage of six men, she set off on a 350-mile journey to gain an audience with Charles. When they arrived, the heir to the throne was plainly dressed and stood among hundreds of courtiers in the great hall. She approached him without hesitation and boldly stated, “I have come, sent by God, to bring help to you and to the kingdom.”

Joan was subject to days of scrutiny from religious authorities. (They even did an exam to validate her claims of virginity!) Her integrity, piety, and determination convinced those in power that she was indeed on a God-inspired mission.

Joan’s confidence in her call translated to bold leadership in a society typically ruled by men. Though French morale was low, she inspired troops to see their efforts as a battle for justice, believing that justice and France’s sovereignty were “indissolubly linked.” She also encouraged the men to confess their sins and take communion, and in an attempt to both elevate women and keep her troops focused, she forbade camp prostitution.

END_OF_DOCUMENT_TOKEN_TO_BE_REPLACED

Men and Women Working Together
END_OF_DOCUMENT_TOKEN_TO_BE_REPLACED