How could I know if ordination was the right step for me?
Read in Multiple Pages 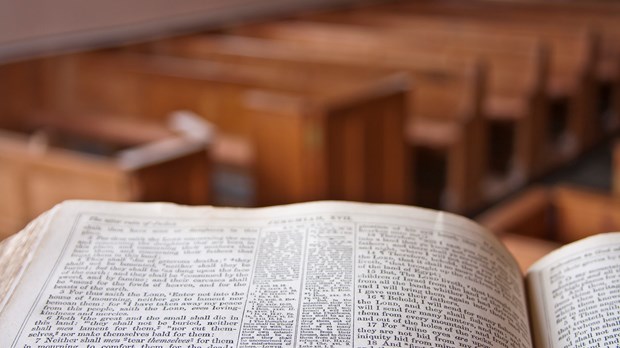 “Just call me Dad.” That was the answer I always got as a child anytime I asked my dad about his job. I knew he worked at a Christian publishing company, but I didn’t really know what he did every day. “Just call me Dad” was enough to quiet my curiosity for a time. Eventually, however, I discovered there was more to him.

I’ll never forget the look on his face when he came in the room. My dad’s work had paid for our entire family to spend a week at a Christian retreat center in North Carolina. I spent each day in a summer camp along with many other kids, some of whose parents worked with my dad. For the first time in my life I learned that my dad was a “boss” with people working for him. And with that knowledge came the temptation to use his title to my advantage. “You have to do what I tell you,” I said unashamedly. “My dad is your dad’s boss, which makes me your boss.” Without a second to lose, my dad came in the room, interrupting our playtime, with a look on his face—a mixture of disappointment and anger.

“What did you say, Dori?” he demanded. I mumbled, repeating my words back to him. He scolded in reply, “I have always told you to just call me Dad, and that’s all you need to know. That is who I am to you. And I better not ever hear you say what you just said again.” I knew enough to know I was in trouble. But what I didn’t know is how this scenario would repeat itself in my brain years later on countless occasions as I have wrestled with my own call to ministry, with ordination, and with titles.

“I’m going to be a youth minister.” Those were the words that launched my call to ministry as I uttered them to one of our youth leaders at the end of a weeklong mission trip. From that moment on I would dedicate every spare minute to learning about ministry and what it meant to be a leader in the church. Since then, countless women and men have poured into me, challenged me, encouraged me, and taught me. I have felt nothing but support from day one. The youth ministry of my church had significantly impacted my life, and my dream was to help create that experience for other students. So I interned with the youth pastor, spent my summers in ministry, and became a Ministry Scholarship Student when I went to college.

Growing up in a Southern Baptist church, I never considered any ministry outside of children, youth, or missions. I was never told that I couldn’t be a pastor because I was a woman—I simply never saw a woman serving in that role or being ordained.

During college, both my understanding of Scripture and my experiences in the church collided, causing me to question what I believed about women in ministry. During my sophomore year, I found myself saying, “I could never go to a church with a female pastor. I don’t have a theological problem with it. It’s just not what I’m familiar with.” What a shift from my upbringing! But oh, how I was making God laugh with my arrogant assumptions of how my life in ministry would look.

My Journey Toward Ordination

“If your home church won’t ordain you, we will.” Those were the words of my pastor in college as we sat on the back row of the sanctuary. He had observed me over the past year, and he challenged me to see something in myself that I hadn’t seen before. He continued, “You are a pastor and you should be ordained as one.” I counter-challenged with the “priesthood of all believers” (1 Peter 2:4–9) doctrine from my childhood, questioning whether ordination should even be practiced in the church. He kindly prodded, “If you were a man, would you be questioning your ordination? Would you hesitate to be called a pastor?” “Actually,” I said, “I hope I would.”

And there it was—in my mind I could see my dad’s look and I could hear my dad’s voice reminding me, “Just call me Dad.” With those four words from my father, I learned never to use titles to my advantage, to serve rather than to lord power over others, and to never seek to make a name for myself. It’s not what comes after your name that matters, I thought. It’s how you live into your name that counts. This wasn’t because I was a woman—it was because I was a follower of the servant leader, Jesus.

So, why in the world would I seek ordination from my home church? Why would I consider co-pastoring a church in Chicago? All I can say is that God works in mysterious ways. My life has been radically changed through altar call moments. I come by my Southern Baptist roots honestly in that way. I surrendered my life to follow Jesus by coming forward in a church service and later being baptized. I responded to a call to vocational ministry by coming forward in a church service and later being ordained. As I sat with the question of ordination, it seemed similar to baptism—an outward sign of an inward calling. Baptism is not a decision to flaunt, but a gift to receive. Likewise, I pray that my ordination was not an attempt at self-promotion but a simple longing to receive the commissioning prayers from the church that raised me and sent me.

My home church ordained me in 2004. It was called a “commissioning service” as I was the first woman to participate in this ceremony and none of us wanted this special moment to spark division in the church. On the day of the service, my pastor approached me apologetically.

“We’re going to have to get you a new certificate,” he said.

“No problem,” I replied. “Did you misspell my name?”

“No,” he grinned, “We printed the certificate that we have on file, and all the pronouns are masculine.”

Throughout the past 20 years of ministry, I have held the titles of intern, resident, pastor, director, minister, and pastor’s wife—and I have likely been called much worse! Through it all, I am thankful for the words of my Dad. No matter what I do, no matter who approves or who struggles with what I do, may my heart always say, “Just call me Dori.”

How to Know If You Should Be Ordained

1. Can you describe a sense of a “call to ministry?” This may not be an altar call moment, but it needs to be a prompting from the Holy Spirit, confirmed be Scripture, and more than just, “I think I’ll give this a try,” or “I’m good at this, so I’ll do it,” or “I like how ministry makes me feel.”

2. Have you spent time studying the history of ordination? It’s important to know for yourself where ordination comes from biblically and what it looks like in different churches. This doesn’t have to be an exhaustive study, but you should know what it means to you and why you are asking to be ordained.

3. Will your home church consider ordaining you? Why or why not? Sometimes the answer is “no” because of your gender, but you should be open to other reasons as well. If it is solely because of your gender, you need to decide if this is something your home church might change in the future—and if you’re willing to stick around through that transition. If not, is there another church that will consider ordaining you?

5. What if you’re not interested in ordination? If you feel others want you to be ordained, but you’re not sure, where does that leave you? Can you be comfortable with how God is leading you even if others want to push you in a different direction? Be wary of people who may have an agenda for you in ministry that is other than the gospel of Jesus. A lot of harm can be done in the name of the kingdom that is not of the kingdom.

Dori Gorman is the co-founder and co-pastor of NewStory Church, a Stadia-partner church on the north side of Chicago, Illinois, and the author of Anonymous: Naming the God of Esther and the Women Who Plant Churches. She holds a BA from Baylor University, and a Masters of Divinity from Emmanuel Christian Seminary at Milligan College. She is gifted as a shepherd-prophet, with a passion for preaching, discipleship, and coming alongside the forgotten.

END_OF_DOCUMENT_TOKEN_TO_BE_REPLACED

Women Leaders in the Bible
END_OF_DOCUMENT_TOKEN_TO_BE_REPLACED