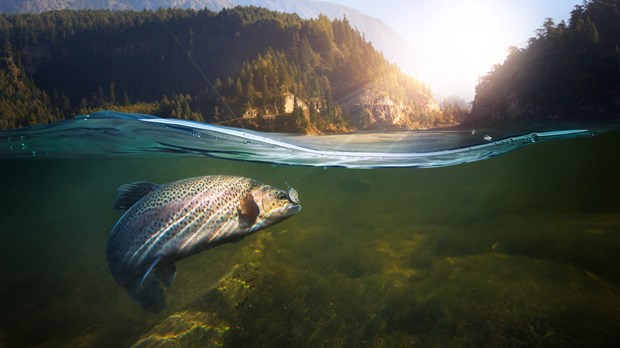 A few years ago, my husband and I moved from Missouri to Idaho to pastor a church. Having spent approximately 48 hours of my life in the state—and only for the interview process—I fully expected Idaho to be true to the stereotype: potato fields as far the eye could see. Imagine my surprise when I discovered that while Idaho does, of course, have field upon field of potatoes, it also has breathtaking streams and rivers, snow-capped mountains, and pristine mountain lakes. My fisherman husband has been in fish-catching heaven ever since.

But in 2015, something strange happened—99 percent of the sockeye salmon run died. Dead fish. Everywhere. What happened? The water was clear, and food sources were readily available. It was as if there was something in the water, some unseen force at work, making the environment inhospitable.

In the same way, there seems to be something in the water of many churches, at both the local and denominational level—something that is hindering women from thriving at the same level as their male counterparts. In generations past, it was easy to identify explicit structures and policies that hindered women from obtaining and succeeding in pastoral roles, but in many cases, those overt barriers have been eliminated. Even so, the number of female pastors hasn’t shifted much. According to Hartford Institute for Religion Research, only 12 percent of congregations in the United States have female lead pastors, and, in evangelical churches, that number drops to 9 percent. If so many barriers have been eliminated, why haven’t the number of women and men in lead pastorates and denominational leadership positions equalized?

Researchers Herminia Ibarra, Robin J. Ely, and Deborah M. Kolb asked the same questions about women in the secular work place, and determined there was undoubtedly something in the water—something that went deeper than the overt barriers of years gone by. They named this experience Second-Generation Gender Bias, concluding that “second-generation bias erects powerful but subtle and often invisible barriers for women that arise from cultural assumptions and organizational structures, practices, and patterns of interaction that inadvertently benefit men while putting women at a disadvantage.”

Good Intentions Are Not Enough

Let’s be clear. We’re not calling out men for evil intent and taking names. There are no torches lit. Women and men both appear to be oblivious to this bias, perhaps aware that something is amiss but with no apparent ability to name it or amend it. Nevertheless, there is something holding women back.

To help us see this clearly, Ibarra, Ely, and Kolb named a few telltale signs of second-generation gender bias. Some examples include:

These examples have the unfortunate ring of familiarity for women leading in the church. Many have found themselves caught in the classic double bind situation. They feel pressured to express their leadership in stereotypical male styles, even if it goes against the natural grain of their personality and leadership style, only to find themselves on the outs with congregations or other clergy because their behavior was perceived as “too aggressive” or as making them seem “unlikable and unapproachable.”

I have personally experienced the challenge of finding a personal mentor. The vast majority of leaders with the experience and skill from which I long to learn are more likely to invest their time and attention in young male clergy. The influence of the Billy Graham rule exacerbates this issue.

Many women often find themselves unable to apply for church positions that require moves or are unbending with schedules as they often have husbands with careers that serve as the more significant source of income for the family. Such limitations stifle the range of job opportunities significantly.

Many organizations, including the church, have tried the “add women and stir” solution, hoping that just intentionally hiring more women will eliminate the disparity over time. But, no dice. That book everyone read once, or that conference on equality in the church everyone attended in 2012? Not cutting it either. These small changes fail to address the inhospitable environment in a systematic, comprehensive way. This results in “sick fish,” women who do not thrive in the environment, thus reaffirming falsely-based assumptions that women simply “can’t hack it” in church leadership.

In the case of the dying salmon, wildlife managers discovered that, for a variety of reasons, the temperature of the river had risen above what was safe for the salmon population. By releasing additional cold water from a reservoir in northern Idaho, they were able to adjust the water in such a way as to make it hospitable for the salmon once again.

So, how do we adjust the water of the church, making it a hospitable environment for all called to serve the church? These ideas are helped along by the research of Kolb, Ibarra, and Ely.

1. Take the temperature of the water.

In partnership with other women and men, spend time evaluating the culture of your church or denomination. Identify areas in which second-generation gender bias might be at work. Consider how you might make actionable steps and encourage those in leadership, through kind and Christ-like conversation, to partner with you in making changes to the culture.

2. Embrace your identity as a leader and get to work.

The water may still be too warm, but there is work to do. Explore your gifts and graces, and don’t count out what might not seem like “typical” female characteristics. You are designed in a unique way in order to bless the church and contribute to the mission of God as only you can. Let your God-given calling and purpose be your guide, rather than a need to prove yourself to others.

Think outside the box, both in how you seek out mentors and in how you negotiate work arrangements. Who says a mentoring relationship has to be in person? Or that a group of peers can’t serve as a mentoring unit, lifting up, challenging, and encouraging one another? When a potential job doesn’t seem to fit with family commitments, what practical solutions can you suggest to keep that door of opportunity open? I have worked both remotely so my kids could play or nap, and I have hauled a pack-n-play and toy bags into my office. I have taken mornings off for park visits and worked after bedtime instead. It’s possible. Make the offer.

Once the wildlife managers responded to the inhospitable water, the salmon population thrived once again. So too, might we bear witness to an explosion of women leaders, preachers, and teachers if we will take the time to adjust the water in which we swim. By the grace of God and empowering work of the Holy Spirit, it is possible. Let’s get to work.

Read in Multiple Pages
Culture|Leadership|Women
January30, 2018 at 8:00 AM

END_OF_DOCUMENT_TOKEN_TO_BE_REPLACED

Men and Women Working Together
END_OF_DOCUMENT_TOKEN_TO_BE_REPLACED