Dr. Catherine Hamlin, 87, has saved countless Ethiopian women's lives through her work repairing fistulas. Most don't know that she labors out of love for Jesus.
Elissa Cooper 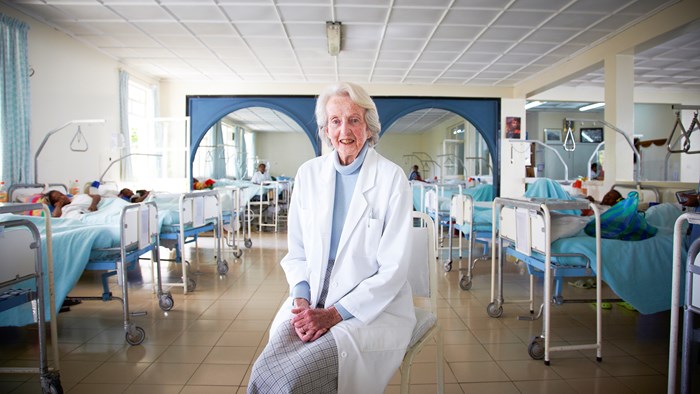 Vesicovaginal fistulas (VVFs) and the people who champion their eradication are fascinating. For Dr. L. Lewis Wall's Christianity Today piece "Jesus and the Unclean Woman," I spent a lot of time learning about VVFs for the accompanying news article, and enjoyed a refresher course for documentary review of A Walk to Beautiful for Her.meneutics. But I finally got to the heart of the story when I met Dr. Catherine Hamlin last month.

The world knows Hamlin's name. The Australian obstetrician-gynecologist has been nominated for the Nobel Peace Prize. New York Times columnist Nicholas Kristof dubbed her "the Mother Teresa of our age," and Oprah has featured her story. However, Hamlin's most striking quality is her Christian faith. It has driven her life's work in healing women with VVFs in Ethiopia and her goal to end VVF worldwide by the end of the century. During her trip to launch Hamlin Fistula USA—the newest member of Hamlin Fistula International—87-year-old Hamlin sat down with me to talk.

Hamlin and her late husband, Reginald, also an obstetrician-gynecologist, were initially hired to work at an Ethiopian government hospital in 1959. "I believe God put us there. We came across these patients soon after we got there. They touched our hearts so much we stayed working with them."

However, they soon found themselves overwhelmed by VVF patients. VVFs are holes or tears that occur during labor where the baby cannot be delivered without intervention, such as a cesarean section. The child usually dies, and the women are incontinent and become outcasts because of their condition. It is unknown how many women suffer from VVF as it usually strikes those in poor, rural areas, but one estimate puts the figure at 3 million women worldwide.

Fortunately, VVFs can be repaired with a simple surgery, and over the decades, the Hamlins have cured thousands of women. In 1974, the Hamlins founded Addis Ababa Fistula Hospital in Ethiopia with the sole aim to treat VVF. Catherine still lives and works there as she performs surgeries one day a week, helps manage the hospital, and visits with patients. "I'm usually occupied all day with something," Hamlin says. "I lie down after lunch for a bit of a rest, since I've gotten old."

Addis Ababa Fistula Hospital is not a mission hospital or affiliated with a particular denomination, but the Hamlins' faith defines it. The staff begins the day with a prayer meeting, and recordings of Scripture readings and messages are available in at least 25 languages for the women to listen to on headphones as they recover. Many patients have become Christians.

As the second fistula hospital in the world (the first ran in New York from 1855 to 1928 when VVFs became obsolete in the U.S.), Addis Ababa depends on donations to provide free surgery and care for these women. Organizations give financial support to run the hospital and provide each woman with a new dress, a bus ticket home, and, if they would like one, a Bible. Hamlin Fistula International also raised money to launch five regional hospitals in Ethiopia that serve 3,000 patients a year and hopes to treat 4,000 annually. In order to prevent VVFs, another project involves training midwives to serve in rural areas and supporting them in their work.

"Most of the midwives in Ethiopia are congregated in the big city, Addis Ababa," Hamlin says. "But our midwives are committed to work in the countryside, and they're happy to work back in their own areas." One of their first trained midwives returned home to find her sister was in labor, and she was able to deliver the child.

Mark Bennett, CEO of Hamlin Fistula Ethiopia, adds, "The challenge is to make sure that we instill the same kind of ethos and environment in five new locations as well as our college to train midwives. We're trying to capture what it is that's made the hospital special, which is really centered on Dr. Hamlin's faith that has empowered her and given her the love and desire to do this work."

The problem may seem relentless, but Hamlin remains optimistic. When asked if her faith had ever been shaken by her work, she firmly says, "No. I never had a doubt about my faith. I've had many answers to prayer, and I know that God is behind us. He loves these women far more than I do."

Hamlin relies heavily on prayer to keep her and others going, but most of all, she asks people to pray that VVF will be over by the end of the century. "Surely we can have something in this 21st century where there's so much done for medical conditions throughout the world, and yet nothing is done for women in labor. The most important moment in their lives, bringing a baby into the world, nobody cares about them. Or they can't do anything if anything goes wrong."

With VVF, the first goal is to treat the physical body, but Hamlin and her staff also find themselves administering emotional and spiritual healing. "They think that God has cursed them. They're so terribly ashamed of this condition," Hamlin says. Women are thrown out by their husbands. One unknown statistic is how many women with VVF commit suicide. Hamlin remembers one story of a girl who was brought in by her uncle after he saved her from hanging herself.

"Once they get through the gate, their attitude changes," Hamlin says. "They come with downcast eyes and ashamed to look up, and then they see somebody with the same condition. They think they were the only ones."

After the surgery, if the woman is able to have children again, Hamlin and others encourage her to marry because "without a baby, there's no life for a woman in the countryside."

"We don't know what happens to them, but some of them remarry and come back pregnant to us," Hamlin says. The women stay there until labor begins, and they are moved to a hospital for a cesarean section. After the hospital discharges them, the women return to the fistula hospital. "We teach them how to breastfeed, how to look after a newborn baby, and give them a set of clothes for the baby. This ward is usually a place of joy."

For someone who has worked tirelessly for others and keeps expanding her vision, I couldn't help asking if Hamlin thought about retiring. "I've got a grave there waiting for me," Hamlin laughs. "I hope to be here a little bit longer."

For more information about Dr. Hamlin, Addis Ababa Fistula Hospital, or fistulas, read The Hospital By the River and Catherine's Gift: Stories of Hope from the Hospital by the River, or see the 2009 Emmy-winning documentary A Walk to Beautiful.

Join the conversation on Facebook
Tags:
Medicine and Health
Posted:March 16, 2011