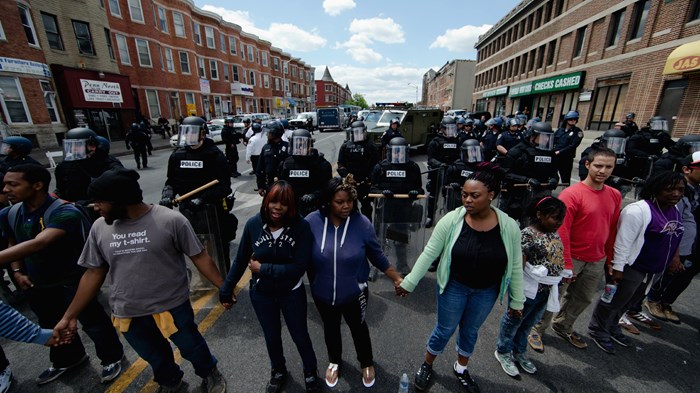 My memories of Baltimore police seem like parallel realities. “Officer Friendly” came to my elementary school back in the ‘80s, a uniformed hero in front of an excited classroom full of black kids. After that, the boys spent recess imitating police officers and catching bad guys. We wanted to be good citizens, and we didn’t question the instinct to call police in times of trouble.

When I was little, I was once a flower girl in the wedding of two of Baltimore's finest. At that age, I remember wanting to be the beautiful bride, a proud policewoman. For much of my childhood, cops were at least valuable parts of our community and at best, heroes…until I met a different kind of officer.

Playing in front of our apartment complex, my friends and I were approached by a patrolling officer who told us we were too noisy. As fourth-graders, we all responded, “Yes, sir,” almost in unison. The officer then turned to the only boy among us, a black boy, and sternly told him that he deserved to be spanked. And that if his parents would not do it, he could and would.

I think of that officer and that boy as I watch the protests in Baltimore. I feel sorry for the kids and young adults who never knew an Officer Friendly and at this point could hardly imagine one.

In recent years, more than 100 people in my hometown—from teenagers to pregnant women to grandmothers—won court judgments or settlements over allegations of police brutality ...