Emotional strength can only hide heartbreak for so long, says pyschologist and theologian Chanequa Walker-Barnes
Interview by Sarah Arthur 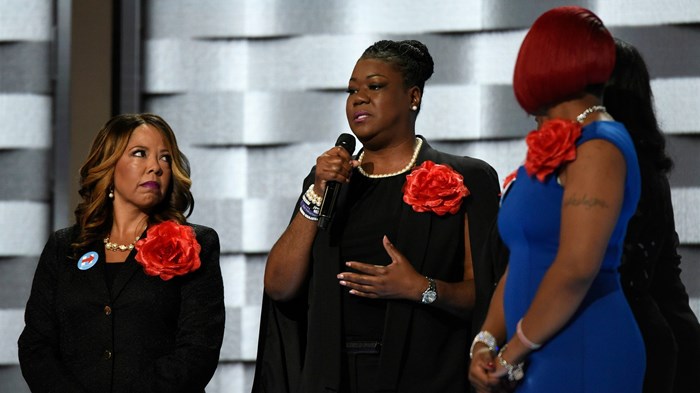 You’ve seen her in the news: the calm African American woman reacting with dignity to a high-stress, traumatic situation. Her voice and face are steady. She stuffs down her emotions. No one will see her fall apart.

She is the Strong Black Woman.

I first heard that phrase in a sermon by Chanequa Walker-Barnes—theologian, clinical psychologist, fellow graduate of Duke Divinity School. Strong Black Woman Syndrome, something she saw regularly in her clinical practice, emerges out of the expectation that black women be “super capable, to take care of others, to be stoic—emotionally strong to the point of stoicism—and radically independent.” And I immediately thought, “I know this stereotype. I remember it from my childhood in the ‘80s. It’s Clair Huxtable.”

It’s a cultural stereotype that’s enforced in the media, in popular culture, even in churches, by blacks and whites alike. But Walker-Barnes points out, this pressure isn’t sustainable. Many black women are falling apart physically and psychologically, as she recounts in her book Too Heavy a Yoke: Black Women and the Burden of Strength (Wipf and Stock).

Picture Diamond Reynolds calmly recording the aftermath of her boyfriend Philando Castile’s shooting by a police officer during a traffic stop—and her daughter alongside her telling her to be strong. (“No four-year-old should ever be in a position, should ever have that language ready to tell their parent in such a moment,” Walker-Barnes said.) It’s Iesha Evans stoically facing arrest by officers in riot gear. And most recently, the ring of grieving but brave mothers on stage at the Democratic National Convention.

Last week I circled back to Walker-Barnes to hear her reflections on some of these events and images, and to better understand how the church can support black women.

When you see black women in the spotlight, like the Mothers of the Movement, what goes through your mind?

On the one hand was the beauty of that moment, of those mothers praising God and looking amazing, but it also made me cringe. It was for different reasons than it made other people cringe, such as the exploitation of black pain—that discounts the women’s agency in choosing to be there. What made it cringe-worthy for me was how much it fit into the Strong Black Woman trope. As long as these mothers continue to perform Strong Black Woman, people will love them, but if at any moment they were to break down and show the grief they feel, and the pain, and the trauma, and the tears, and the rage, they would cease to be our heroes. I wonder what it’s like for those women when they aren’t together, when they aren’t drawing upon the sisterhood of tragedy. What is the toll? What are they going to look like years from now?

Tell us some more about the Strong Black Woman. Where does she come from? What are her strengths?

It developed as part of the black women’s club movement of the late 19th century, when black women were being talked about in the way people like Donald Trump talk about Mexicans today. That type of rhetoric was levied toward black women openly. There was a very concerted effort on the part of religious and nonreligious women, but especially Christian women, to combat those stereotypes by putting forth this alternative image of themselves: the woman who can carry her burden in the heat of the day, the woman who can march for justice, take care of her family, take care of her community, and never show any sign of wilting under that labor. It was the idea that black women could be as ladylike as white women, but as strong emotionally, spiritually, and intellectually as black men. That image has become the most common image of black womanhood in popular culture.

You call out churches for perpetuating and even enforcing this stereotype by spiritualizing it. What does that look like?

Christian tradition has been deeply intertwined with the development of this stereotype, as the black women’s clubs often were located in churches. It continues today in the way we measure a black woman’s faith in the church: it’s usually related not to so much her relationship with God or even her struggle for justice in the world, but it’s about her capacity to withstand suffering without complaint. She’s such a strong woman of God because all this horrible stuff happened to her, but look at her: she’s still here.

We see in the church more than anywhere the physical health consequences of women living into this image. I’ve sat in churches and heard people talking about the strength of black women, and I’m looking at the congregation and I’m thinking, “I don’t know if I see strength.” What I see is a lot of chronic obesity, which we’re not supposed to talk about. I say that as someone who struggles with weight myself. We will normalize the problems that we have.

Tell us more about these physical consequences.

Forty percent of African American women ages 20 and up have diagnosable hypertension; about a third of black women have diabetes. The health problems that are connected to not taking caring of ourselves and to stuffing down all of our feelings are literally killing us.

It’s connected with trauma. One of the studies that I talk about in the book is where social science researchers look at black women who had experienced trauma, and they found these women were more likely to internalize the characteristics of the Strong Black Woman as a way of coping with trauma. So, something traumatic happens to you and instead of grieving that and going through that process, you stuff all those feelings in, you hide behind the mask of emotional strength, you keep taking care of everybody else, you keep working, and then you start engaging in self-medicating behaviors: you start binge-eating, you put a lot of focus on your physical appearance, you do a lot of makeup, hair, clothing, compulsive shopping, you start picking up these other health problems associated with these behaviors. On the outside, look, she’s such a strong woman, but she’s falling apart inside….Nobody knows that she’s struggling with depression, with anxiety.

What do you tell women when you begin to recognize Strong Black Woman Syndrome?

What I don’t do is deconstruct the Strong Black Woman in a way that says “This is evil; this is something people shouldn’t do.” Because I recognize it as a coping strategy. It’s about distinguishing between this as coping strategy and this as personality. We’ve been engaging in the coping strategy for so long that we think this is what we’re supposed to be. But no, this is something I have to put on to make sure I can maneuver in a hostile environment: it is not who I am.

When I started this book I was probably telling women, “Circumstances have changed. We don’t need to be living into the Strong Black Woman to the extent that we used to live into it.” But in light of everything that’s happened over the past couple of years, I’m not so sure anymore. More and more myself I feel like I have to armor up; I have to put on my armor because how else do I keep moving in the world when I can barely get up in the morning without hearing, learning about, witnessing another cultural assault, more cultural trauma?

Part of what I try to get women to do is really be aware of where this comes from, why they do it, and to be intentional about how they do it. It’s not that we drop the armor, but that we choose when to put it on and we very consciously take it off. When you’re going out into battle, you put on your armor. But when you’re back in your safe space you recognize that you’re in your safe space and you learn to take the armor off: when you’re at home, with your family, when you’re with your friends. That armoring up is something we should do in the short term for short bursts; it’s not something we should wear all the time.

How can churches and Christians best offer care and support for black women?

We need to let go of that emphasis on sacrifice and martyrdom as the ultimate test of discipleship. We need to always hold that in tension with Jesus’ assumption that we love ourselves. To a man who is focused on proving yourself out in the world, asserting yourself, being independent, then this idea of loving your neighbor and sacrificing yourself is a very profound message. But for women, we are used to sacrificing ourselves; the issue for most women is that we don’t have that sense of self to begin with. We have to learn to develop that sense of self and learn to love who God has created us to be.

Another challenge is for churches to learn what good, holy self-love looks like in the face of a hedonistic society; let’s talk about what that means as Christians. So that when people depart on a journey of healing it doesn’t take them away from the church.

We need to create spaces where it’s safe for women [to be honest with each other, to ask “How is it with your soul?”] but also where the healing takes place communally. Otherwise when individual black women try to seek healing and try to move away from the Strong Black Woman, they’re very much critiqued by other black women who are still in the throes of that identity. Women can be educated so they can see Strong Black Woman; because once you see it, it’s like, “Of course. I kind of knew that.” Or, “Wait, that’s what I was sensing, that’s what my intuition was all this time that I wasn’t naming and couldn’t name because my culture didn’t let me.”

Sarah Arthur is the author of over eleven books, including, with co-author Erin Wasinger, The Year of Small of Things: Radical Faith for the Rest of Us (Brazos Press, January 2017). She lives in Lansing, Michigan, with her husband, Tom, pastor of Sycamore Creek Church, and their two young sons, Micah and Sam. www.saraharthur.com

Chanequa Walker-Barnes is Associate Professor of Practical Theology at McAfee School of Theology at Mercer University and the author of Too Heavy a Yoke: Black Women and the Burden of Strength(Wipf and Stock). She lives with her husband Delwin and son Micah in Atlanta, Georgia. www.drchanequa.com