It's not always easy to get there, but the blogosphere needs more of us.
Marybeth Davis Baggett 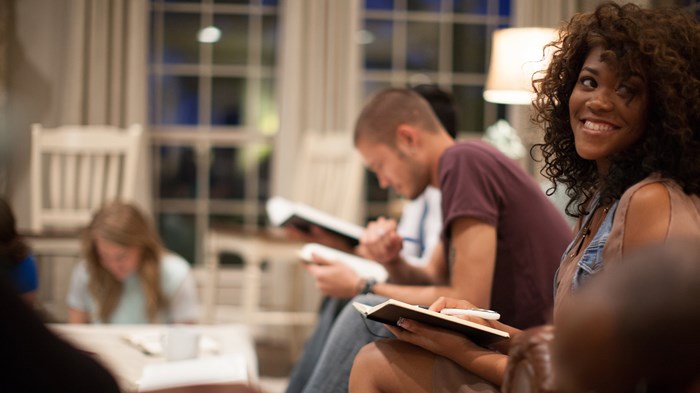 When I started seminary a few years ago, I didn’t really feel as if I belonged. I’m a conservative Christian woman in her 40s with several English degrees and a full-time teaching job—a far cry from the typical divinity school student.

From the outside, I look like the kind of woman described in a recent Buzzfeed article. As someone who grew up in a conservative Christian home and was shaped by the religious right movement of the ’80s and ’90s, I resonate with many of the concerns shared by the women the author interviewed: passionate commitment to social justice, authentic acknowledgement of human weakness, and a strong desire for community. Sometimes dubbed “New Evangelical Women,” their numbers are legion, filling arena after arena for gatherings like the Belong Tour, creating online communities like She Reads Truth, and boosting product and book sales for parachurch ministries like Beth Moore’s Living Proof.

In evangelical seminaries, however, women are relatively scarce. According to the Association of Theological Schools, in 2015 women filled only one of every three divinity school seats, and as Sharon Hodde Miller notes, the gap is even greater for evangelical schools. The gender disparity makes sense. Female divinity school graduates don’t have many job prospects, in part because of restrictions in pastoral and teaching roles in certain evangelical denominations and their affiliated schools. Cedarville University, for example, prohibits men from enrolling in courses taught by their female Bible faculty. Other factors contribute to low numbers of female seminarians, as well. Many married evangelical women—with or without children—shoulder domestic responsibilities and therefore don’t have time for seminary (or higher education more generally). And of course lack of money is often a problem.

Nonetheless, women crave spiritual nourishment and theological education no less than men. The universality of this desire is evidenced by the explosion of the Christian blogosphere, with its niche emphases on mothering, relationships, pop-theology, and life coaching. Women by the scores turn to these resources for discipleship, spiritual formation, and edification. Why? Some local churches simply don’t offer theologically substantive ministries for their female members. For the ministries that do, some suffer from a lack of formal support by church leadership, and others can’t compete with the flashy, mass-marketed resources of online ministries.

In this context, what does formal seminary education offer women? My own experience might provide some answers.

A few years ago, I joined Christ and Pop Culture as a staff writer. If anyone could do the job, I thought, surely it was I. I have a doctorate in English and an established teaching career. I also have unimpeachable “independent Baptist” credentials. Name any artifact of the evangelical subculture, and I’m existentially acquainted with it: Awana, sword drills, church camp, tracts, altar calls, Daily Bread devotionals, Jesus First pins, and Thief in the Night—a dramatic “come to Jesus” film about which I still have nightmares.

However, the first time I sat down to write a piece, I found myself struggling to express my Christian convictions and fearing that I might accidentally stray into heretical territory. I thought, How in the world is this possible? To that point, I had practiced theology largely by intuition and absorbed biblical doctrine by osmosis. My upbringing had given me the right answers, but when it came time for me to explain “the hope found within me,” I was merely a parrot and not a dependable defender of the faith. In that moment and ones that came after, I felt a growing obligation to deepen my biblical and theological acumen, both for my sake and the sake of my readers.

Although this condensed version of my story is a little hyperbolic, it does capture the pivot point that led me to seminary. I realized that, without a solid foundation rooted in church tradition, held accountable by an orthodox faith community, and governed by biblical authority, my Christian convictions were susceptible to internal and external forces. They could easily be shaped by my own feelings, altered by cultural pressure, or warped by expediency.

As Kate Shellnutt reminds us, today “ambitious women can draw mass followings around their writings, teachings, and events without the restrictions of geography, official titles, or other structures.” But to quote Anne Kennedy, “good writing does not a theologian nor a Christian make.” It might even provide cover for otherwise questionable teachings. Recent announcements by prominent female bloggers provide evidence that this scenario is not merely plausible, and that contemporary evangelical culture is replete with theological pitfalls. Seminary, of course, is not a cure-all. Divinity schools aplenty proliferate unbiblical theology, and many faithful believers simply disagree about what falls inside the bounds of orthodoxy. Nonetheless, evangelical theological education has the potential, at least, to help protect us from “every wind of doctrine,” as Paul says in Ephesians.

Many women, including several contacts of mine, cite these same concerns as the ones that led them to the classroom. Alice Walters, a 2009 graduate of Liberty University School of Divinity, reports feeling frustrated by a lack of theological education. “Basically, [the problem] comes down to the poor job we do in discipleship in our churches,” Walters told me. “After growing up in church all my life, I wanted to understand the Bible deeper. Seminary was the only option.” Walters notes as well that she has not been the only beneficiary of this education: “As a homeschooling mom, it's been a great help to give my kids a deeper background in theology too.”

Ellen Mandeville, a current Liberty seminarian, began her studies out of frustration with the materials available for women’s discipleship. “A book I was reading in a women’s Bible study aggravated me,” says Mandeville. “It was full of proof texting, weak data, and poor arguments. However, I could not quite articulate its problems. As well, I was beginning to have magazine articles and book reviews published, and I wanted a better academic grounding in the Christian faith.”

The problem is apparent: Christian women need better theological training. However, the solution is complicated. Seminary was the answer for Mandeville and Walters, but it remains out of reach for many women. Still others don’t yet see their need for more substantive resources. Changing these conditions will require innovation, both corporate and individual, as well as a renewed vision for discipleship.

Shaking theological education loose from gender expectations would be a helpful first step forward. “The minute a man says, ‘I'm called to XYZ,’ he has a host of mentors and a clear track, usually through seminary, sometimes even funding,” says author Hannah Anderson. “This kind of clarity and support is simply lacking for women. When a woman expresses a call, it's received like she just shared about a new hobby. In this sense, going to seminary as a woman probably requires a level of individualism and trailblazing gumption.” As Katelyn Beaty, editor at large for CT, recently wrote, “We shouldn’t be surprised that so many women lack basic theological grounding when churches send the men to read Augustine and Barth and send the women to read books with teacups and doilies on the cover.”

With this problem in mind, local churches ought to think more seriously and systematically about ways to support women who might (and should) want more theological grounding. The most obvious support mechanism is offering direct financial backing for traditional seminary education, a case Miller makes in her recent reflection about the state of women’s ministries. Another is to purchase reliable academic resources by Credo House and others, which are too pricey for one person but can circulate widely within a congregation.

For women who feel fettered by family commitments and geographical constraints, there are low-cost, low-commitment alternatives to seminary studies. Although the Internet has allowed unreliable and unorthodox resources to flourish, it has also made available many high-quality resources. iTunes U, for example, has a number of video courses uploaded by seminaries throughout the country—often the same videos used for classes at those same seminaries. N. T. Wright has a number of New Testament courses available at low cost through Udemy. Calvin College’s Christian Classics Ethereal Library puts readers in touch with classical texts on Christian doctrine. And Right Now Media offers an array of Bible studies, sermons, and lessons for a reasonable rate.

Although seminary in its various forms is a powerful source of personal education, its ultimate purpose is communal. Substantive theological study and engagement enables women to raise the bar for discipleship and spiritual formation in our local churches. It also helps us address the pressing spiritual questions of our present age: How should the church work toward social justice? What is the message of hope that can be offered to those with unmet sexual desires? How can we live counter-culturally in a world that equates human worth with power or prestige?

Despite the contemporary packaging of these concerns, they are at heart perennial questions that have been grappled with throughout history and can be answered in part by tapping the treasure trove of sturdy Christian resources at our disposal. Christian women—no less than men—are legatees of this philosophically and theologically profound heritage, one that marks out orthodox boundaries and models a time-tested, trustworthy method for biblical interpretation and cultural engagement. We Christian women should drink deep from that well. We should immerse ourselves in its refreshing and spirit-filled waters. We should know its taste intimately, so that when we’re offered a sip from an untested spring, we can discern if it’s bitter or sweet.

Marybeth Baggett is Associate Professor of English at Liberty University, former associate editor and contributing writer at Christ and Pop Culture, and current associate editor at MoralApologetics.com. She is coauthor, with her husband, of At the Bend of the River Grand: One Hundred Thirty Years of the Passionate Pursuit of Holiness at Eaton Rapids Camp Meeting.

Join the conversation on Facebook
Tags:
DoctrineSeminariesTheologyWomen in Leadership
Posted:December 4, 2016