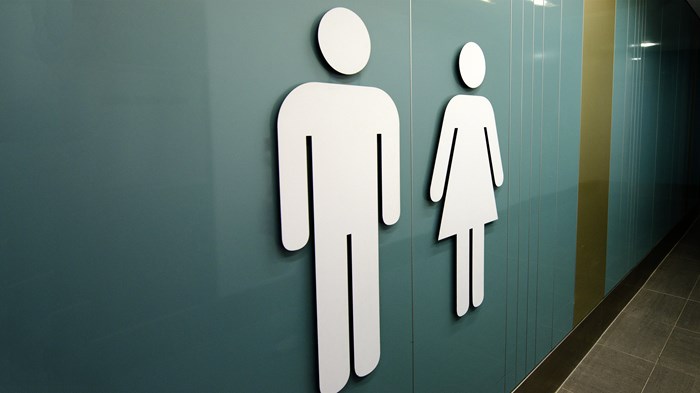 The first time I was kicked out of a women’s restroom, I was ten years old.

At halftime of a high school basketball game, I walked into the restroom with several girlfriends and faced a trio of teenagers who blocked my entrance to a stall and told me to leave. A girl in a cheerleader outfit said boys who wanted to venture into women’s restrooms were clearly perverts and that I should get out. I backed out of the door and stood in the hallway, waiting for my friends to emerge, my facing burning with shame.

The high school girls had decided that, because of my short curly hair, my Toughskins jeans, and my Converse shoes, I was definitely a boy. I was also apparently a pervert, slyly slipping in to women’s restrooms to, I suppose, watch girls relieve themselves. This was the first but definitely not the last time my right to use a woman’s restroom was challenged by folks who decided I was not welcomed—and, that I had nefarious intentions.

For at least a decade, I was routinely mistaken for a boy and regularly banished from bathrooms.

The “bathroom wars” are now all over the news. The Target Corporation has issued a formal policy allowing LGBT persons to use the restroom that corresponds with their gender identity, North Carolina has passed a law (known as HB2) requiring people to use the restroom that corresponds to their birth gender, and several states are now suing the Obama administration over its directive stating that public schools must allow transgender students to use the restroom of their choice. Stories of men policing restrooms and a grocery store security guard assaulting a transgender woman trying to use a women’s restroom have only fueled the debate about whether public restrooms will ever be safe.

Yet lost in the polarizing arguments about gender identity and access to bathrooms is the fact that bathroom watchdogs have been active for generations. Such vigilantism leaves long-lasting emotional scars for those who are told that they do not belong in a bathroom because they do not look the part of a boy or girl, man or woman.

Some people might argue that the now-and-then mistakes over someone’s gender are worth it in order to keep restrooms safe from perversion. But our mistaken efforts to judge based on appearance have long-term impact on people who don’t fit our stereotypes and cultural norms.

For at least a decade, I was routinely mistaken for a boy and regularly banished from bathrooms. P.E. teachers and coaches assumed I was sneaking in to women’s locker rooms, or—even more inexplicably—trying to orchestrate an athletic advantage by playing on girls’ athletic teams.

As a first-year student at a Christian university, I was sometimes kicked out of women’s dorms, including my own, because people assumed I was transgressing “floor hour” rules. I could catalog a hundred times and more when I was humiliated by people who interrogated my gender-ambiguous appearance, to my face or behind my back, but almost always within hearing distance: Is that a girl? Is that a boy? It’s so hard to tell.

The most mortifying confrontations occurred when I was with others, like the time when, at 18, I was at the state fair with friends, wearing platter-sized earrings and trying hard to appear feminine. A clump of teenage boys approached the group and announced I was the ugliest guy they’d ever seen. I wanted to die—literally, not figuratively—and after this and other encounters, I wondered how hard it would actually be to drive my car off the road and end my life.

Some might wonder why I didn’t just try to be more feminine to preserve myself from heartache. My wildly curly hair was hard to control unless it was cut short. I wore my brother’s hand-me-downs because my dad was not fairly compensated as a pastor. I was a late bloomer with a flat chest and an athletic build and I felt more comfortable in jeans and tennis shoes. I was also opinionated and loud, traits girls were not supposed to embody.

Even now, entering a public restroom still causes me anxiety, and I struggle at times to accept who I am, as God created me.

I believed—and still believe—I was being the girl God had created me to be, regardless of how I looked or dressed. Yet because I didn’t conform to cultural dictates about how girls were supposed to act, appear, or feel, I wasn’t accepted as the woman I am. Few places outside my home felt truly safe for me. At any moment, someone could confront me with questions about who I really was. Even now, though I am a mother, a wife, a professor, and a writer who should be wholly past this mortification, entering a public restroom still causes me anxiety, and I struggle at times to accept who I am, as God created me.

I understand that people have principled reasons for disallowing transgender men and women into public restrooms corresponding with their gender identity. They want to protect their children from predators and are afraid that men, especially, will somehow use these rules to gain access to girls. I share the desire to protect children from assault and, as a mother of two boys, I’m deeply unsettled by the idea that my own kids could be the victims of predators.

Nonetheless, I believe that bathroom bans are not the answer. True predators will continue to find ways to abuse children. As has been pointed out time and again in this debate, if we truly want to protect children from sexual assault, we need to focus not exclusively on public spaces like bathrooms but also at private spaces, like our homes, our cars, our churches. About 86 percent of sexual assaults take place with people our children already know. Of course, because this reality is so scary, the specter of assault so close and familiar, it seems far easier to control the doors to our public bathrooms and locker rooms.

Of course, Christians differ in their views on sexual ethics and gender ontology. But even as we hold our different convictions, we can all agree it’s important not to target others based on narrow gender constructs that exclude people like me. Because when someone hears she is not feminine enough, not girlish enough, not pretty enough to really be a girl, what she will hear is that she is not enough, period. And that message seems in its own way abusive.

Melanie Springer Mock is a professor of English at George Fox University. In 2009, she won the university’s Faculty Achievement Award for Undergraduate Teaching, and in 2015 she received the school’s Faculty Achievement Award for Undergraduate Research and Scholarship. She is the author or coauthor of four books, including, most recently, If Eve Only Knew: Freeing Yourself from Biblical Womanhood and Becoming all God Means for You to Be (Chalice Press, 2015).