Even with her flaws, the “first lady of the conservative movement” understood a fundamental human desire.
Jen Pollock Michel 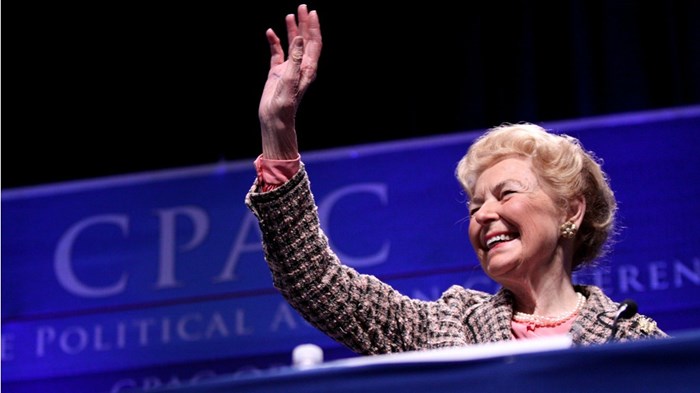 Phyllis Schlafly, who labeled herself a housewife, called 1964 one of the most productive years of her life: “I was running the Illinois Federation of Republican Women; I wrote A Choice, Not an Echo; I self-published it; I went to the Republican convention; wrote a second book, The Gravediggers—now we’re in September—I was giving speeches for Barry Goldwater, and in November I had a baby.”

When Steve Inskeep, host of NPR’s Morning Edition, announced the news of Schlafly’s death, I assumed he would interview an academic happy to expose (with feminist animus) the hypocrisy of a woman who benefited from women’s rights and also opposed the Equal Rights Amendment (ERA). Instead, Inskeep talked with Penny Young Nance, CEO and president of Concerned Women for America. Nance described the legacy Schlafly has left for conservative women and, in her closing elegiac remarks, called Schlafly “kind and strong.”

Somewhat ruefully, I admire the woman who championed the role of homemakers. In the current culture, however, it’s a lot easier to be embarrassed by her. Her grassroots activism prevented adoption of the ERA, which passed both houses of Congress and was approved by 35 states—just three short of the 38 needed for ratification. In a 1975 debate at Indiana University, Betty Friedan, author of The Feminist Mystique, declared that Schlafly deserved to burn at the stake for her opposition to ERA. In her 1987 book, Just a Housewife, feminist scholar Glenna Matthews practically dedicated her work to opposing Schlafly. (“Feminists need to take a serious, sustained, and sympathetic interest in the home,” Matthews writes, “because it is too valuable an institution to leave to Phyllis Schlafly and others who take a negative view of feminism.”) And in 1980, writer Gail Sheehy of The New York Times contemptuously concluded that “Phyllis Schlafly’s formula for the better life . . . is based on marrying a rich professional, climbing the pedestal to lady of leisure and pulling up the rope ladder behind her.” (Indeed, Schlafly, at 24, did marry a man 15 years her senior who was already well-established in his law practice.)

What these and other feminists intend to make clear is that Phyllis Schlafly—and her tireless defense of traditional roles—was bad for women.

To be sure, Schlafly, “first lady of the conservative movement,” is a polarizing figure. She often began her public remarks with gratitude to Fred, her husband, for “letting me come here.” She called women’s vocational endeavors “moonlighting” and likened her own political activism to a “hobby.” But whether one agrees with Schlafly’s “anti-feminist” agenda, one can’t help but marvel at the woman’s indomitable will, energy, and influence. Political scholar Alan Wolfe conceded that while “every idea [Schlafly] ever had was scatterbrained, dangerous, and hateful,” she was also one of the two or three most important Americans of the 20th century, “if political influence consists in transforming this huge and cantankerous country in one’s preferred direction.” Without ever holding public office, Schlafly was a political force to be reckoned with.

Despite my disagreement with Schlafly’s politics, I am grateful that she defended the value of the home (and the role of homemakers) against the sometimes-misguided ambitions of second-wave feminists. Their denigration of domesticity can be debated, but it is public record that Friedan—when polling her Smith College classmates—wanted to know how they served the milk and what kind of napkins they used. For her, the simplest domestic activities were measures of relative liberation and oppression. Simone de Beauvoir, author of The Second Sex, also considered domestic roles and responsibilities the curse of the female gender: “Woman is doomed to the continuation of the species and the care of the home—that is to say, immanence.”

Schlafly challenged this disdain and also questioned the assumption that all women feel exiled to the home. “The women’s libbers don’t understand that most women want to be wife, mother, and homemaker—and are happy in that role,” she said. “The women’s libbers actively resent the mother who stays at home with her children and likes it that way. The principal purpose of Ms.’s shrill tirade is to sow seeds of discontent among happy, married women so that all women can be unhappy in some new sisterhood of frustrated togetherness.”

In sum, Schlafly argued for domestic desire. She articulated what I believe, except with her characteristic fierceness (instead of my cowardice): Women want a home, filled with loveliness and people.

Those who know me will assume, naturally enough, that I defend the value of homemaking. Like Schlafly, I am the mother of five children, whom I breastfed and taught to read before they went to school. Like Schlafly, I am wealthy, white, and among the privileged few who have a choice between “home” and “work.” But unlike Schlafly, I have been a reluctant proponent of homemaking, not least of which because I live in a city where the cultural sophisticate is as reluctant to admit her domestic desire as she is to show off her canker sore. (“So what if we all have them? I’m not interested in seeing yours.”) It’s far easier to publically own your professional aspirations than it is to admit a preference for the long, seemingly servile invisibility of domestic life.

To her credit, Schlafly defended the very biblical idea that home is an irrepressible longing. In fact, our longing for home evidences that we are made in the image of a homemaking God. In the beginning, the Maker of heaven and earth began work on humanity’s very first home. Habitability, in fact, was the quality commended by God in Genesis 1. To say the earth was good meant not simply that it was lovely but that it was ready for guests. The acts of creation—light and sky, land and sea, man and woman—were acts of service, God kneeling at the feet of humanity. However irreverent this idea might seem, the Scriptures bear witness to it: “When I consider your heavens, the work of your fingers . . . what is mankind that you are mindful of them?” (Ps. 8:3–4). Creation was humanity’s first home—a place of loveliness, a place for people, a place for keeping company with the God of welcome. No wonder we all long for home.

Unlike Schlafly, I don’t want to dictate rigid roles to women and men regarding home and work. In truth, I’m grateful for the creative conversations happening these days, as families imagine what it looks like for both husbands and wives, fathers and mothers to value home and pursue other meaningful work if they so choose. But I do hope, as Schlafly might have, that men and women can own our domestic desires with greater courage and joy—even the limitations that those desires impose on our “freedom.”

Antoinette Brown Blackwell was the first woman to be ordained as a Protestant minister in the US. Early in her career, she traveled and lectured for the abolitionist cause. She eventually quit her itinerant lifestyle, saying, “I can’t go wandering up and down the earth without any home . . . I need a pleasant happy home to rest in and some pleasant happy children there to keep me from being a misanthrope.”

Phyllis Schlafly would surely have agreed.