After seeing the new spy thriller, I still don't know what a female action hero looks like.
Laura Kenna 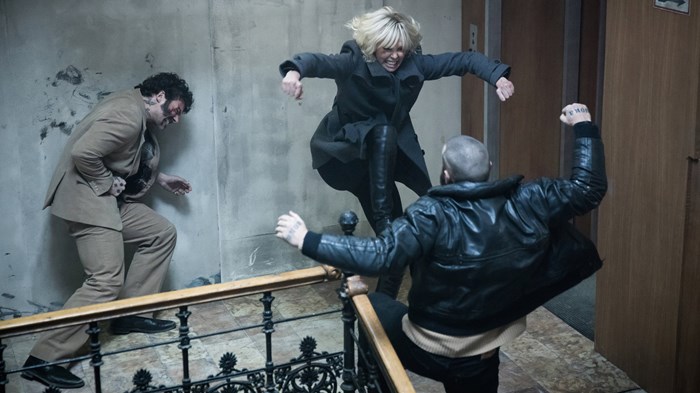 Many moviegoers turn to the absurdities of comedy or the happy endings of romance when looking for an escape. I’m more of a guns and explosions kind of girl, so I’d been looking forward to Atomic Blonde, the Cold War espionage thriller starring Charlize Theron as MI6 operative Lorraine Broughton.

Atomic Blonde is a highly stylized, spy-versus-spy picture based on a graphic novel. Though shot in color, the film relies on a restrained color palette and boasts carefully blocked frames and noir-inspired lighting. Set in the divided Berlin of 1989, the film also draws on an array of ’80s references, from shoulder-exposing sweatshirts and stiletto ankle boots to a soundtrack so full of beloved ’80s hits that licensing them all ranks as one of the film’s most impressive stunts.

As if in tribute to the Soviet enemies of the Cold War, the film’s plot has taken the form of so many Russian nesting dolls: Each new layer of the tale opens up to reveal another hidden inside. The crisis that sends Agent Broughton to Berlin involves a murdered MI6 agent and a missing list of all the undercover intelligence operatives in the city. Both East and West are willing to kill for the list (and do), as it poses both a security threat to their operations and an opportunity to gain the upper hand.

The list is also believed to reveal the identity of a Soviet double agent who has infiltrated MI6. While the Brits know codename “Satchel” exists, they’ve been unable to find and eliminate the traitor. In addition to the female lead, the characters involved in untangling the plot include Broughton’s fellow British spy, David Percival (played as a charming maniac by James McAvoy), a handful of East German, West German, and Russian spies that become hard to keep straight, and the CIA (embodied by John Goodman).

The cageyness and cunning of spy films is part of their fun, but this film’s number of betrayals stacks up almost as fast as its body count. After one last clever reveal that comes in the final scene, viewers get the answers to all of the story’s riddles, save one: Why should I root for Lorraine Broughton?

Although the film delivered more than its fill of eye-popping action, I was looking forward to watching a female hero. Instead, I got only a female spectacle.

If you’ve seen any of Atomic Blonde’s marketing, you already know that star Charlize Theron performed her own stunts for the picture. News articles, interviews, and promotional videos have emphasized Theron’s physical accomplishments as an achievement on behalf of women, a vindication of the phrase “fight like a girl.” But the picture puts forth a stylish yet bankrupt vision of female power, a vision so constrained by its dedication to sex appeal that efforts to brand the movie as empowering to women have the ring of snake oil peddling.

Atomic Blonde forges its version of female strength almost entirely out of violence and sex. No matter how many men she knocks out cold, Lorraine is always an object of desire, not just a physical threat. (As if to prove it, she even fights while wearing a garter belt.) And her choice of partner feels contrived for the titillation of the audience rather than for the satisfaction of the character. About midway through the film, Lorraine is the initiator in a “girl on girl” sex scene that is so explicit yet so utterly predictable that after it, I could no longer strain my imagination to consider this a women’s action movie. (Note: I fear this sex scene has also forever altered what will pop into my head when I hear “Voices Carry.” Fans of the song, consider yourselves warned.)

Though its events are relayed from a female perspective, Atomic Blonde ultimately feels staged for male viewers. It confuses a woman’s power to fulfill men’s fantasies with what it means to be a fulfilled, powerful woman. In so doing, it forsakes the chance to develop an admirable female hero.

Alongside the car chases, bad-guy confrontations, and balls of fire, action movies at their best deliver heroes, and with them, a reason to believe in what those heroes fight for. They tap into our desire to see the best of humanity, to root for characters that fight and sometimes fail for their convictions. They also invite us to imagine what it looks like to cultivate and practice virtues like selflessness, bravery, truthfulness, persistence, and mercy—a service that can be especially important when we find real-life virtue in short supply. Their plots imagine men and women’s capacities to invent, to defend, to make peace and most often to rescue.

The overwhelmingly male action film genre explores and celebrates the good in both the human body and human spirit. But men are only half of who God created as his image bearers. Although Atomic Blonde attempts to fill the gap, its creators squandered the opportunity to exploit Theron’s considerable acting skills as fully as they did her physical ones. The team made a point to adapt her fighting technique to what a woman could actually do—hence, fewer punches and more “found objects” used as weapons—but left audiences with no distinctively female image of leadership.

What would female heroism look like on a big screen? It’s a question so big even Wonder Woman can’t answer it alone. That film’s runaway success earlier this summer, however, suggests that Diana Prince has inspired admiration and might be at least be a start for imagining women as action heroes.

The latest iteration of DC Comic’s curvy warrior is—like Theron’s spy—a beautiful female spectacle. Still, the film resists further playing up her sex appeal by keeping the heroine’s single romantic encounter off screen. Instead of whom she seduces, the content of Wonder Woman’s character is crucial to how the plot moves forward. Diana’s urgent preoccupation with whether the war is moral—not just winnable—sets her apart so completely from the other characters that some mistake her as crazy. By attributing her perspective to her all-female upbringing among the Amazons, the movie suggests that female leadership might look like keeping strategic wartime choices tied up with moral ones. Determined to use her powers to end the fighting, Diana is less a peacenik than a humanitarian. Her conscience demands that she must do anything she can do to lessen human suffering, no matter the odds.

Of course, a female hero need not be Wonder Woman. But she also needn’t be the woman imagined by Atomic Blonde. Sadly, the spy movie limits its female protagonist by framing her as a sex object for male viewers. It starts to feel like a too-easy substitution of a woman into a series of typical action scenarios imagined for a man. Though the filmmakers worked at making Theron’s exquisite fighting moves distinctly female (who else would kill a guy with a patent leather pump?), they neglected to give Lorraine an interior life. Having invested so little in her characterization, they leave audiences with similarly little to admire in her character.

Laura Kenna has a PhD in American Studies and teaches on cultural criticism, film, and writing at Trinity Fellows Academy and blogs about popular culture at remotepossibilitiesblog.com.