Dispatches from Charlottesville: What Happens When Neo-Nazis Are Outside Your Church Doors

The protesters came with torches. We sang, “This Little Light of Mine.”
Leah Wise 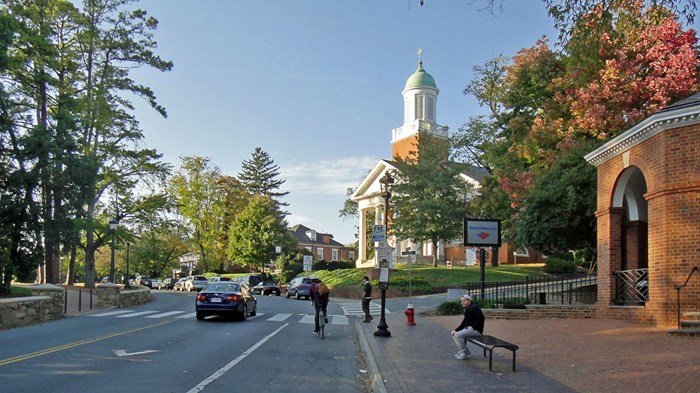 I have lived in Charlottesville, Virginia, for five years. I used to work along the city’s Downtown Mall, the shop-lined pedestrian street where Heather Heyer was killed this weekend by a participant in a neo-Nazi rally.

The place I viewed as a microcosm of Charlottesville’s contented citizens and progressive politics—packed with townies in hiking gear or polo shirts and families making their way to the children’s museum—turned into a landmark for racist violence.

Inspired by the legacy of its beloved founder, Thomas Jefferson, Charlottesville is a town enamored with its values. We pride ourselves on community, innovation, and progress. Yet, throughout the city’s history, the economically secure white population has experienced a very different Charlottesville than the rest.

It took me a while to realize the extent of segregation in the city, but the signs were there. Beyond the racial segregation by neighborhood, there’s the cultural divide between conservative Southerners and liberal-leaning University of Virginia (UVa) professors and grads. Heightened economic disparity and rising housing costs in this “happiest town in the USA” certainly aren’t helping. We are united by our bordering-on-idolatrous love for our city, but sometimes that’s all that connects us.

Because of this demographic diversity, Charlottesville lives in the tension of its progressive values and its failure to live up to them. Nothing more effectively demonstrates this tension than the events of last weekend. While the majority of white supremacist protesters were not from here, notable UVa grads Jason Kessler, who initiated and organized the rally, and Richard Spencer, who popularized the term alt-right, were determined to make Charlottesville the center of their movement. They believed they could get a foothold here.

An estimated 600 self-described neo-Nazis traveled to Charlottesville last weekend, some of their faces now made infamous by haunting photos on the news. Our town of 46,000 people, anticipating as many as 2,000 attendees, started planning counter-protests and events as soon as word got out about the “Unite the Right” rally, advertised as the event that would consolidate white supremacist authority and start a national movement.

Among the people I know in Charlottesville, debates broke out over the right way to respond. No one show up. Everyone show up. Protest the police. Attend counter events far removed from the city center. I tried to prioritize pragmatic, ethical, and popular tactics to decide what I would do. And then, of course, there was the question of what my faith commanded me to do.

Having grown up in a patchwork of evangelical and mainline Christian traditions, I know that “there is neither Jew nor Gentile, neither slave nor free, nor is there male and female, for you are all one in Christ Jesus” (Gal. 3:28). Jesus commands us to care for the “least of these” (Matt. 25:40), and for me, inaction would be a denial of my baptismal vow to “seek and serve Christ in all persons, loving your neighbor as yourself.”

So I ended up going to church.

On Friday night, I walked up the stairs of St. Paul’s Memorial Episcopal Church, my home church, across the street from UVa’s majestic Rotunda. On a normal Sunday, St. Paul’s is not quite full, its pews spotted with students, families, and retirement-age folks—all mostly white. But that night, the nave was standing room only, with overflow crowds moved into the side chapel. My Charlottesville neighbors and a smattering of out-of-towners—black, white, brown, young, old, Muslim, Christian, Unitarian, Jewish—stood side by side.

We came because we were scared, or at least confused. We didn’t know where else to go. We came because we shared a call to social justice and we knew we needed each other. Perhaps, white Christians like me came because we thought it best to create safe space with people who didn’t look like us if we intended to claim something different than the torch-bearing white folks literally outside our doors.

Cornel West, a scholar and social activist, and Traci Blackmon, a denominational leader in the United Church of Christ, reminded the crowd that fear has no place in the collective life of the faithful and that God created the very light that exposes and negates darkness.

We sang “This Little Light of Mine” in cheerful a cappella as the protesters gathered around the church and in the neighboring yard, making it unsafe for us to leave. (At the time, we didn’t know that violence had already broken out between the demonstrators and a group of student counter-protesters with lit torches across the street.)

To say I was scared would be an understatement. But then the Spirit of God showed up, like a messenger commanding, “Do not be afraid.”

The song leader told us to sing loud enough for the neo-Nazis outside to hear. This church—my Episcopal church—normally a place of stiffness and Southern gentility, transformed into a loud celebration. We were stomping and pounding on the backs of pews, clapping our hands together like cymbals. We were singing spirituals and marching songs together with unencumbered joy, all ages and races and faiths together, trapped in a building with no particular urgency to leave each other. In that moment, we were unified, choosing joy in the face of an unknowable terror.

After 45 minutes of waiting, we were cautiously dismissed, told to leave from the side door or the back alley in order to go unnoticed. The moment was gone but the fire within was still lit.

On Saturday, clergy and the faithful from all over the country marched in silence to face an armed neo-Nazi militia, took refuge in a nearby Methodist church, hosed off the pepper sprayed; prayed with the traumatized, offered safe space to all who needed to sit, and bore witness to a chaotic threat we never expected in our small college town.

But as I look back to the packed Friday night service at St. Paul’s Memorial, I see glimpse of the kingdom.

I thought that the key to dismantling white supremacy lay primarily in my individual attentiveness and individual action. Like many well-intentioned Christians, I assumed if I read enough think pieces and prayed hard enough I would wake up woke someday.

I forgot that God called me, called us, into a community of the faithful, that instead of “being the change,” I could sometimes simply be present where the change is already occurring.

It would be easy for outsiders to claim that this small occurrence of symbolic solidarity is meaningless in the grand scheme of things given the ongoing, systemic biases in our country. Yet, I am convinced that such acts of solidarity have the power to change our communities for good.

Members of the Charlottesville Clergy Collective will continue to meet each week to discuss and discover how best to lead their local flocks. Those who bore witness last weekend, I hope, will continue to show up and make space for one another. I take with me the promise and the reminder that when we are terrified, God shows up, in faces that look like mine and in faces that neo-Nazis hate.

Leah Wise writes on sustainable fashion, social justice, and personal faith, primarily at stylewise-blog.com. She lives with her husband in Charlottesville, Virginia, where she works in lay ministry in the Episcopal Church. She tweets as @stylewiseblog.

Dispatches from Charlottesville: What Happens When Neo-Nazis Are Outside Your Church Doors

Dispatches from Charlottesville: What Happens When ...