Christians abroad and Muslims at home helped me find the holy day in the holiday.
D.L. Mayfield 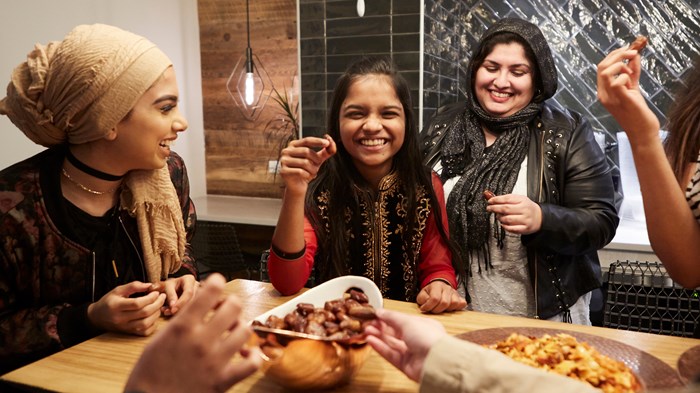 Holidays are a blend of culture, tradition, marketing, and consumerism—with sometimes a little religion thrown in. At least that’s how it feels in the US. How and what we celebrate has a lot to say about our own culture. Christmas, in particular, is a perfect example of the syncretism of modern-day religious celebrations: We can blame Hallmark all we want, but most of us have willingly engaged in the commercialization of a day that’s supposed to revolve around prayer, gratitude, and religious devotion.

Two unique Christmases from my childhood and young adult years have given me perspective on what it means to practice the holiday outside of this mainstream context.

When I was eight, my family was in central Mexico on a two-month-long trip. My mother bought my siblings and I each a bandana and used it to wrap up a few little toys and candies. We sang Christmas songs by candlelight and ate enchiladas. Even as a child, I knew these rituals differed from those of years past, when we had snow outside, holidays cartoons on the TV, and an Easy Bake Oven underneath a sparkling Christmas tree. Nonetheless, I was still happy. I relished the differences, and the night felt holy—connected more closely to the story of a savior who entered the realities of our world.

The second time I celebrated Christmas in another country, I was in India, where Christians are a religious minority. There were no decorations in the stores, no holiday tunes being piped in everywhere. It was hot and dusty and didn’t feel like Christmas at all. I was a recent high school graduate, and I cried when my parents called me on the phone.

On Christmas Eve, the group I was with attended the one Catholic church in a city of millions and listened to a few hymns sung in English, including “O Holy Night.” I felt a strange mixture of the familiar and the unknown. On the way back from the service, we drove past low-lying houses in poorer neighborhoods on the outskirts of the city. Our guide and interpreter pointed out the lit paper stars that hovered above the corrugated-roofed houses and huts. “The people who put up the stars are Christians,” our guide told us. “They are signifying the presence of Christ in their homes.”

Those simple, star-lit decorations burned in my heart, both for what they did signify as well as what they didn’t. They cleared away the cultural clutter from years of commercials and customs designed around food, gifts, and a manufactured, Norman-Rockwell-esque vision of Christmas. Although I didn’t realize it until then, that contrived vision had separated me and others from the realities of a very hard world—and what it means to truly live like Jesus is our Lord and Savior.

At the moment, Christianity in the US is in a unique place. Christianity—at least its nominal form—is still the majority culture. However, believers striving to be disciples of Christ are immediately put at odds with that same culture. We also live inside another ongoing tension, as our religion of prominence loses ground to an increasingly secular and pluralistic society. This tension, in particular, often leads to conflict and fear. Take for example the “war on Christmas” being broadcast from the highest office of government, pushing stores and coffee shops to say “merry Christmas” instead of “happy holidays.” For some (not all), this response to religious pluralism is based on a longing to protect power and prominence.

In reality, however, syncretism has been embedded in the American way of celebrating Christmas long before the first Coke ad debuted with a rosy-cheeked Santa Claus. Furthermore, I believe that religious pluralism can actually strengthen how faith communities celebrate holidays—by bringing us back to the roots of what we believe and underscoring how we express those beliefs thoughtfully in diverse community.

Abraham Joshua Heschel, a prominent Jewish theologian, often wrote about how interacting with devout people from other faiths brings an essential humility to one’s own view of God. It does not encourage moral relativism, but it does encourage us to continue listening to God and continue doing God’s work in community with others who profess the same.

More than anything else, I’ve learned this lesson by watching my friends of other religions celebrate their holy days here in the US.

For the past decade, I have lived and worked in refugee communities, where a large majority are practicing Muslims. Some cities, like Minneapolis, have the benefit of a larger concentration of immigrants, but most cities, like the one I live in now, don’t have a large presence of religious minorities. In my neighborhood, there are few religious sites that aren’t Christian, and the stores do not promote or even sell the traditional foods eaten at Eid (a Muslim holiday), Diwali (a Hindu holiday), or the Chinese New Year. In this minority context, my neighbors do not have the luxury of being buoyed by cultural norms and expectations, so celebrating holy days takes extra intentionality.

I was recently invited to celebrate Eid with some friends and neighbors this last September. During the holiday, I watched them cook food that was meaningful to them, share that food with others, and give coins and small gifts to their children as a way to teach them about generosity. I watched them as they gathered, prayed, reflected, celebrated in whatever ways they could, and connected via Facebook or WhatsApp with family members scattered throughout the world.

Observing my friends celebrate has not only helped me crystallize my own faith beliefs—it has also shown a glaring spotlight on all the ways my culture has allowed consumerism to infect a religious holiday. Trying to explain Santa Claus, Black Friday, and Elf on a Shelf to people interested in understanding more about our “Christian” nation has been humbling. It’s caused me to interrogate how comfortable I have become with the nonessentials becoming a focal point of my Christmas celebrations.

In this Christmas season, it would do Christ followers well to continue asking these questions. We need to avoid getting caught up in the endless cultural celebrations—some of which are more influenced by politics and economics than religion. Instead, as we follow Christ (sometimes in direct opposition to a culturally assimilated religion) and as we look more and more toward the possibility of our minority status, we need to joyfully celebrate our faith in true and authentic ways. We need to mark the seasons of our lives with gratitude and awe for what God has done.

A few years ago, I bought a paper star of my own to hang at Christmastime. I hang it high in my window for the neighbors to see. It’s just one small light in the midst of decorations everywhere, and yet it helps me remember the Christians all around the world who delight in awe and wonder at a baby who came to take away the sins of the world. It gives me a concrete visual of a God who became incarnate in our suffering and brokenness. And it reminds me, most of all, that the invisible one took on flesh and blood, became a light in the darkness, and promised to us that the darkness would never overcome God’s love.

D. L. Mayfield is a frequent CT contributor and author of Assimilate or Go Home. Her most recent CT cover story was “Facing Our Legacy of Lynching.” She lives in Portland, Oregon.