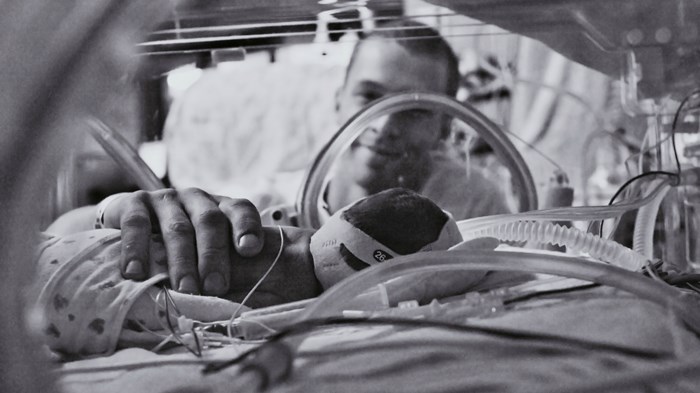 Just like when God created the world in Genesis, our first assessment of new life comes down to breath. Moms wait for that telltale cry when a newborn sucks in his first gulp of air. Doctors often measure viability—whether the baby can survive outside the womb—by their ability to breathe.

Back in the 1960s, babies born at 36 weeks or earlier regularly died of respiratory distress syndrome because their lungs were not ready to function on their own. Doctors now understand that these young babies need surfactant in their lungs—like a lubricant that keeps their tiny air sacs from sticking shut—and technology has brought us an artificial substance to help.

Because of this development, babies born earlier and earlier have better odds of survival. Recent research shows that over the past 20 years the survival rate for babies born before 28 weeks has doubled. Babies born as young as 22 weeks—that’s more than four months early—still have a slim chance.

Step into any neonatal intensive care unit (NICU) in America, and you’ll see how modern medicine has advanced the pro-life cause. Babies whose survival was once declared impossible now live, grow, and thrive. My own twins—born at 31 weeks and six days—were saved by such technology.

But these developments have also raised new moral and ethical questions. As a pro-life Christian, of course I believe life begins at conception. But when do I believe life is viable? Do we take our cues from medical science here?

The Supreme Court declares abortion legal for all non-viable fetuses, meaning that the earlier a baby can survive the harder it becomes to use viability as a pro-choice argument. The NICU proves that life begins far earlier than abortion proponents would care to admit, but introduces us to other challenges over keeping fragile premature babies alive.

The questions of whether to continue to intervene to try to save a premature baby’s life are not hypothetical to parents and doctors forced to make such decisions. They are as real as the baby lying in front of you.

Journalists Kelley and Thomas French wrestled with these questions with their daughter and in their new book, Juniper: The Girl Who Was Born Too Soon. While never answering what any one couple must do in a similar situation, the Frenches take readers on a journey through the NICU—a place most pregnant mothers dread and few (about 10 percent) actually experience.

As the Frenches knew when their daughter was born at 23 weeks and 6 days—the cusp of the age of viability—medical advice on whether to treat a baby born that early can come down to subjective and shaky factors. “The scariest scenario was if I delivered right at the threshold—in the 23rd week. Because that is the zone between viability and futility,” they wrote. “New technologies might keep our daughter alive, but at great cost. Whether to save these infants is one of the fundamental controversies in medicine.”

A mother’s due date calculation (which can be a few days off depending on her cycle) or the baby’s disposition (her “will to survive”) can be the difference between resuscitating an infant or not.

While our boys weren’t “micro-premies” (NICU language for babies born under 2 pounds), we know our identical twins would likely be born early—it was just a matter of how early they would be. We set a goal to make it to 34 weeks; most babies born at this age go on to have no significant difference from babies born at term. We made it 31 weeks 6 days.

With every achingly honest detail that filled the pages of the Frenches’ book, my heart rose to my chest. As I read about Juniper’s story of what can only be described as a miracle for a baby who had a tremendous will to live, I was propelled back into our time in the NICU.

Like Kelley French, I struggled to process all of the information being thrown at us as we checked into the hospital knowing our twin boys would be born two months early: brain bleeds, blindness, hearing loss, lung problems, blood transfusions. “Expect to stay at least until the due date,” we were told. “They will have a rough go at it,” my OB/GYN said as he held my hand and sat beside me on my bed. “This is not how we hoped it would happen.”

I’ve been in a silent operating room, barely catching a glimpse of my 3 pound babies, before they whisked them away to get them on oxygen. It’s haunting to see babies so small that they don’t cry when they are born. I watched nurses “stimulate” my babies to get them to start breathing again or get their heart rate up.

We spent five weeks in the NICU, and the critical days were up and down. Some days I could hold them; some days I could not. Eventually they moved out of the critical wing and then they were just “feeders and growers” as they like to call them. Those five weeks changed us, as parents and as Christians. But we never had to face the life-or-death viability decisions that the Frenches did. Babies born at 31-plus weeks live all the time, so whether to save them was never a question.

Treating babies before 24-weeks—so small they weigh just about a pound—is an entirely different scenario. It becomes a matter of ethics, and not all doctors are willing (or think it right) to put such tiny babies through such intense life-saving measures when they aren’t even guaranteed survival.

I’ve been pro-life since God saved me in college, but the NICU opened up a whole new world for me regarding the value of human life. Etched in my mind are babies who were much smaller than my own and nurses and doctors who gave their lives to save them. Along with all the stories of babies who survived and babies who didn’t is Juniper’s story.

The Frenches weren’t ardently pro-life, but Kelley bristled when doctor said she may lose the “pregnancy.” She wrote, “The baby was not the pregnancy. The baby was my daughter. Lose my daughter. She would slide out, wet, raw, mute, purple. Slide right out of my body in a river of my blood. She would not be lost at all, she would be right there, in my hands, turning gray.”

They also dealt with practical concerns about the costs of such treatment:

There was a 20 percent chance she would live and be reasonably okay. I contemplated that figure: 20 percent. It didn’t seem hopeless. Then again, imagine a revolver with five chambers. Now put four bullets in it and play Russian roulette. Would we bet on a 20 percent chance if losing might mean forfeiting everything we cared about? Would we torture our baby with aggressive treatment just so she could live out her life in a nursing home or on a ventilator? Would we lose our house? Would our marriage fall apart?

This book reminds us that behind every policy decision, ideological position, and even sound bite about life issues, lives a real person, making real decisions. Empathy goes a long way, especially inside the quiet corners of the NICU. If you want to understand a small part of their struggle, this book is the place to start.

“Many of the tiniest babies in the NICU don’t die on their own. They are babies who would have died without intervention. So here, they die by decision,” the Frenches write. “They are taken off life support by agreement of their parents and doctors, when the suffering becomes too great and the prognosis becomes too grim.” This death by decision poses a hard question for pro-life Christians. Is it permissible to be pro-life and decline intervention? In a lot of ways, this is not a clear black and white issue. Sometimes accepting intervention is only postponing the inevitable. Sometimes it’s not. The choice to take a child off life support is as agonizing in the NICU as it is in any other ward in the hospital. There are no easy answers.

The NICU shapes a family. I learned how to be a mom in a cold, NICU room, carefully navigating wires and feeding tubes. Looking back five weeks feels like nothing compared to the three and a half years I have had my boys home with me. But in the moment it felt like my world was crashing down around me. I still have the NICU number saved in my phone. I remember the good work done there every time I’m scrolling through the Ns looking for another number.

While moms of premies can celebrate the medical advances in the NICU, we also see the complex ethical questions few would have fathomed possible even fifty years ago. Saving babies at very young ages can come at lifelong cost to them and their parents. When one pro-life argument finds support, another question arises. Confronting the developments pushing viability earlier may actually encourage us to refrain from framing the abortion debate around this measure at all.

Kelly French referenced a prediction that seems increasingly likely: Medical technology will one day advance to the point of creating artificial uteruses, where viability outside the womb then becomes answering the question of whether an embryo can live outside of a petri dish. As we advance as a society, the pro-abortion argument will struggle to find reasons to prove their case medically, even if it means defining life in far earlier terms.

For the Christian we can come at this ethical dilemma from a different angle. While affirming the value of all life, and being willing to do whatever if takes to sustain life, we also must hold the tension that we are broken down to our very cells. We don’t know why some babies possess the will to live at 22 weeks and others can barely make it at 30 weeks. Only God knows why some people fight illnesses better than others.

But a Christian worldview informs us that every part of this world is crying out for redemption, where we are free from these broken bodies and living in a world free from the stain of sin. At the end of the day, we must humble ourselves before the God who is the creator and sustainer of all life, even the smallest lives gasping for breath in the incubator.

The NICU is a place that you cannot leave unchanged. For some, it makes them consider the value of life and the fierceness of the human spirit, like the Frenches. Or maybe, like me, it makes you thankful for the advances of modern medicine that not only save the lives of the smallest of humanity, but also remind us that every single life matters, no matter how small.