When Women Blame Men for Domestic Stress, They Miss the Big Picture 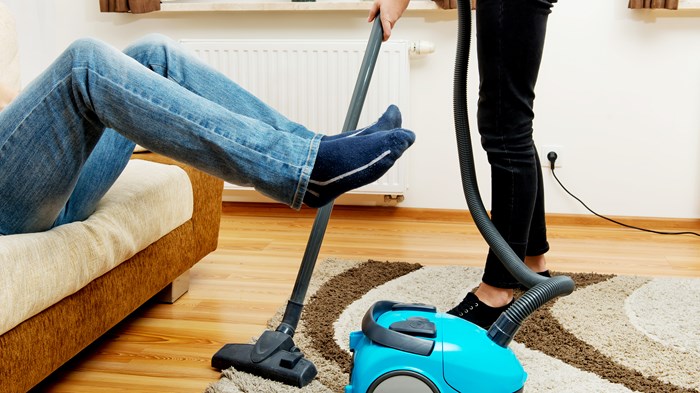 TIME recently published a piece on housework and parenting asserting that until men share the “invisible workload that drags women down,” women will never be free. Lisa Wade reports on a study by sociologist Susan Walzer in which “Walzer found that women do more of the intellectual, mental, and emotional work of childcare and household maintenance.” She writes,

We have come a long way toward giving women the freedom to build a life outside the home, but the last step may be an invisible one, happening mostly in our heads. To truly be free, we need to free women’s minds. Of course, someone will always have to remember to buy toilet paper, but if that work were shared, women’s extra burdens would be lifted. Only then will women have as much lightness of mind as men.

Wade is exploring a well-known and seemingly unresolvable debate: In a post-industrial society where the home space is often cleaved from the work place, who does the domestic work around the house? How do men and women share (if at all) the tedious work of mopping floors, changing diapers, and dashing to the grocery store when the milk runs out? And for those who work outside the home, how do they balance both?

In her recent book, Unfinished Business: Men, Women, Work, Family, Anne-Marie Slaughter argues that in order to understand the unique challenges that women face, we also need to understand the unique challenges that men face, and in order to find tenable solutions, we have to treat the enigma not as a "woman's problem" but rather as a broader "caretaking problem" that involves both women and men. As Christians wrestling with the biblical vision of God’s unique design for men and women, this challenge invites not mere solutions to a problem but an open door to experiencing the nature and character of God himself. Understanding the way men and women worry is only the first step.

Although Wade argues that the two sexes worry disproportionately—and that women carry the heavier burden of the mind—I argue that men and women simply carry different burdens. What I worry about is not the same as what my husband worries about. Of course I rejoice that men participate in housework more than men of past generations and that women can work at jobs that interest them, but nonetheless I want to state the obvious: male and female mental processes are not identical, nor should they be. Walzer observed the kind of thinking that women do, observed men and found that they don’t do that same kind of thinking, and then made a moral judgment about men—all men everywhere—as being oppressive to women. I call a foul, and apparently I’m not alone.

One week after Wade’s piece, TIME published a response by Josh Levs that no doubt reflects the backlash from male readers:

The column was not designed to bash men. And it did note that men and women spend equal amounts of time doing a combination of paid and unpaid work. There’s no doubt it resonated with many readers. Still, it was misguided to suggest that men have lightness of mind. Men have an invisible workload too, and it is weighing on them.

Wade’s most misguided assumption—and the assumption that her argument hinges on—is that men have a “lightness of mind.” As a Christian, I need to stretch toward the most charitable reading of this line. I can only assume that Wade hasn't had close contact with lower-class, middle-class, and even upper-class men who carry significant economic and domestic burdens. Perhaps she means the beleaguered silence that men lapse into when they're accused of not helping enough. Or perhaps she has in mind the deadbeat dads who shirk their responsibilities. Setting aside these outliers, however, “lightness” is not the word that best describes the mental state of the average American husband.

Men may not notice that the toilet paper needs changing, but they carry their own burdens—some of which are similar to women’s worries and others that are unique. My pastor-husband, for example, often lies awake at night worrying about money, anxious about the health and salvation of our children, fretting about whether he will have a job the next day that will allow everyone to eat, pondering how to relieve the physical burden of housework that I carry, being anxious about the tax bill, calculating how to eke out a holiday or send a child to college, and sometimes praying for the sick, the downcast, and the oppressed.

Numerous studies indicate that my husband is not alone. “Polls suggest that men feel as great a conflict between work and family as women do (and in some polls, a greater conflict),” writes Slaughter in Unfinished Business. “Both sexes are trapped in the same system.” She also cites a 2013 Pew Research study indicating that “almost as many fathers as mothers bemoan the stress of trying to juggle work and family.” Levs, too, offers additional evidence:

Stress levels are on the rise, too. On a 10-point stress scale, the average man scores a 5, essentially closing a previous gap with women, the American Psychological Association found. Men die by suicide 3.5 times as often as women—more than 90 men a day. And the problem is global. But few people realize the mental health struggles of men, because men are less likely than women to let on how stressed or anxious they’re feeling. And they’re less likely to seek help.

As a person who worries a lot, I find it comforting to occasionally lift up my eyes and discover that my husband is also worrying. At that point, I have two choices: I can inquire as to the substance of his worry, or I can judge him for not concerning himself with mine. When I choose the former, we both have room to breathe. I am my own person. He is his. Without being subsumed by one another—where one person swallows up the other—we participate together in the diversification of worry. As a believer, this diversification is a great gift. We two, in our unlikeness, compliment each other and temper the anxieties of the flesh that we are so often in the Bible commanded to leave alone.

My husband is completely unlike me. He doesn’t notice what I notice because he is busy noticing different things that I hadn’t even considered. He carries around a mountain of anxiety just like I do, but it is not the same, and that is a great gift, a blessing, a providential grace.

An even greater mercy, though, is that even when we are small minded and stressed out, even when we measure half of humanity against ourselves, God doesn't let us dwell there. In a world strained by work and survival, by male and female misunderstandings, and by unmet expectations, disappointment, and loneliness, there is a way to unburden oneself of anxiety and trouble. But it's not to foist those burdens on another person, to look at the man across the dinner table and blame him for not meeting your needs and desires. It's to look at the man on the cross who came to take your anxiety onto himself. That man understands all men, certainly. But he also understands all women, not as a man understands a woman—which is not very well—but as God understands the person, which is perfectly.

Anne Carlson Kennedy lives in upstate New York, where she mothers six young children and helps her husband pastor a small Anglican church. She has an M.Div. from Virginia Theological Seminary and is the author of Nailed It: 365 Sarcastic Devotions for Angry or Worn-Out People (Kalos Press). Find more at her blog, preventingrace.com. This article was inspired by a recent post on her blog: “The Way Women Think Is Not a Liability.”

When Women Blame Men for Domestic Stress, They Miss the Big Picture

When Women Blame Men for Domestic Stress, They ...