From Katharina Luther, who escaped a convent and became a radical reformer, to Amanda Berry Smith, an itinerant minister who was born a slave, these women changed history.
Michelle DeRusha 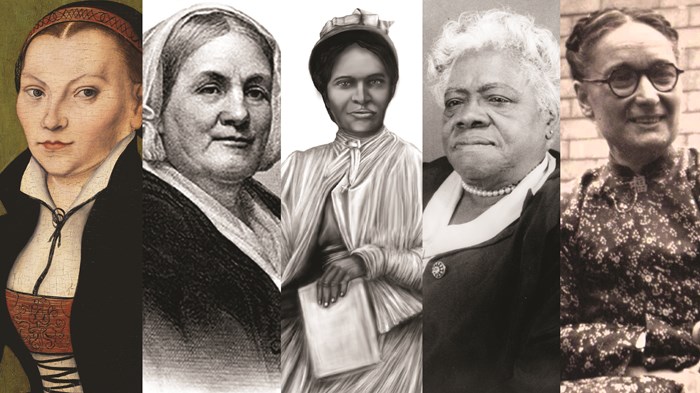 A few years ago, a book debuted featuring short biographies of people who had made an impact on Christian history. The book spanned four centuries. Of the 50 people spotlighted over those 400 years, only four were women.

“Women’s voices have not been as public and powerful as those of men throughout much of history, but this does not mean they were not influential,” says Karen Swallow Prior, author of Fierce Convictions: The Extraordinary Life of Hannah More. “Writing and reading about women in history helps us all (women and men) to better understand the past in order to better understand our present and, as a result, improve the future.”

Women’s stories matter, not only for the inspiration and encouragement they offer, but also because the preservation of these stories presents us with a fuller, richer, and more accurate history. From the era of the early church—when women gathered to pray with the disciples in the Upper Room—to today, when they teach, lead, and minister to multitudes, women have always been an integral part of Christian community. Preserving and celebrating women’s history is a way for us to preserve our whole church history.

With that in mind, I offer here the stories of five historical figures that every Christian should know, celebrate, and emulate:

Katharina Luther (1499–1550)
After reading some of Martin Luther’s writings that had been smuggled into her cloistered convent, Katharina von Bora decided to risk punishment by death and flee monastic life. In the dark of night on Easter eve, Katharina and 11 of her fellow nuns crept past the cloister walls and into a waiting wagon that carried them into the unknown. Two years later, desperate to survive in a society hostile to women, she refused to marry a suitor she didn’t like and asked Martin Luther to marry her instead. Martin and Katharina were married for nearly 21 years, until he died in 1546.

Danish philosopher Søren Kierkegaard once claimed Katharina Luther was nothing but a plank in Martin’s theological platform. Kierkegaard couldn’t have been more wrong. In dismissing Katharina so categorically, he made a caricature of a woman who in reality was a bold risk taker, determined survivor, savvy businesswoman, astute advisor, trusted confidante, devoted wife and mother, and a woman of unwavering faith. Martin may have married Katharina in order to put into practice what he preached, but it didn’t take long for the great Reformer to realize he had wed an intelligent, industrious, radical reformer in her own right.

Margaret Fell (1614–1702)
Like Katharina Luther, Margaret Fell may be best known as the wife of a famous religious leader—she married Quaker founder George Fox 11 years after the death of her first husband—but her story and historical contributions easily stand on their own.

In dozens of letters, essays, and pamphlets, Fell convincingly laid out the fundamental tenets of Quakerism and campaigned relentlessly for the abolishment of Quaker persecution. She was imprisoned twice in England’s Lancaster Castle (the first time for four years, the second time for a year) when she refused to cease leading Quaker meetings in her home. While in prison, she wrote tracts in defense of Quaker principles, as well as four books, including her most famous, Women’s Speaking Justified, in which she defended the right of women to serve as public preachers.

In her 88 years, not a single person swayed Fell from her service and loyalty to God—not a judge nor a jury; not the king, nor his council; not even her own seven children, who watched their mother be led to prison twice for her refusal to compromise her beliefs. Five months before her death, she wrote, “I shall stand for God and Truth,” a testimony she lived by her entire life.

Born a slave and the oldest of 13 children, Smith was preaching regularly in Methodist and African Methodist Episcopal churches in the Northeast by the time she was in her early 30s, despite the fact that neither denomination supported female preachers. To earn a living, she worked 20-hour shifts as a washerwoman.

Smith also preached in the Methodist holiness camp meetings that were spreading up and down the East coast, and, because of the color of her skin, was scorned, ostracized, and gawked at as a curiosity. “Sometimes I would slip into a tent,” she wrote about her camp meeting experiences. “Then I would see [white people] peep in, and if they saw me they would say, ‘Oh! Here is the colored woman! Look!’”

In spite of the daily abuse and humiliation she endured, Smith stayed focused on her mission, which was to bring people, including her persecutors, to Christ. “Lord,” she prayed daily, “help the people to see.”

Mary McLeod Bethune (1875–1955)
Born the 15th out of 17 children to former slaves in South Carolina, Mary McLeod Bethune was the only African American in 1,000 students at the Moody Bible Institute’s Mission Training School in Chicago. She dreamed of serving as a missionary in Africa, but upon applying to the mission board of the Presbyterian Church, she was told there were no openings for “Negro missionaries” in Africa.

Undeterred, Bethune shifted her focus to the education of American black children. “Africans in America needed Christ and school just as much as Negroes in Africa. ... My life work lay not in Africa, but in my own country,” she later acknowledged. With $1.50 as a down payment, Bethune opened the Daytona Literary and Industrial School for Training Negro Girls in Florida in 1904. She had six female students and her own son. Discarded boxes and packing crates served as desks and chairs, and Bethune’s own seat at the head of the classroom was a barrel turned upside down.

Two years later, more than 100 girls were enrolled. Bethune established a board of trustees composed of the area’s most upstanding white male citizens, among them James Gamble (co-founder of Procter and Gamble), who later admitted he had assumed Bethune was a white woman when he first received her appeal letter. Today, the school enrolls 3,500 students on an 80-acre campus and is known as Bethune-Cookman College.

Gladys Aylward (1902–1970)
When 26-year-old Gladys Aylward was told by the director of the China Inland Mission that she was neither young enough nor smart enough to join a mission team, her dreams were crushed, but not for long. After two years of hard labor and penny-pinching, Aylward bought herself a one-way ticket to China on the Trans-Siberian Railroad, packed her Bible and two suitcases, tucked her passport into her corset, kissed her parents goodbye, and departed from a London train station to China.

Aylward met up with long-time missionary Jeannie Lawson in the mountain village of Yangchen, and together they opened an inn for travelers that later became an orphanage. By 1938, more than 100 children lived there. When war broke out with Japan, Aylward served as a spy for the Chinese, and when the bombing reached her village, she led the orphans to safety on a 100-mile trek through the mountains, nearly losing her own life in the process. Known throughout China as Ai-weh-deh—the Virtuous One—Aylward lived a life of service defined by determination and perseverance.

The stories of the women who have walked before us are an integral part of women’s history and also of history as a whole. “I hope we will get beyond the idea of ‘Christian women leaders’ being a special subset of Christian community,” says religion scholar Diana Butler Bass. “Women are the majority of Christians around the world—we are the heartbeat of living faith.”

Michelle DeRusha is the author of three books: Katharina and Martin Luther: The Radical Marriage of a Runaway Nun and a Renegade Monk (Baker Books), 50 Women Every Christian Should Know: Learning from Heroines of the Faith (Baker Books), and Spiritual Misfit: A Memoir of Uneasy Faith(Convergent). She lives in Lincoln, Nebraska, with her husband and their two boys. Connect with Michelle at her website and on Instagram and Facebook.

Join the conversation on Facebook
Tags:
HistoryInternationalMissionsWomenWomen in Leadership
Posted:March 5, 2017