How the liturgical service enriched my non-liturgical faith.
Carolyn Arends 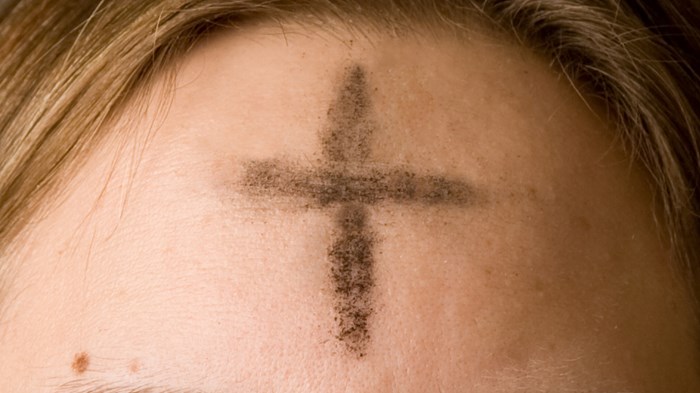 When the first Hunger Games movie was released in 2012, my daughter Bethany was 11 years old. Influenced by a determined lobby group of pro-Hunger Games preteens at her school, she mounted a vigorous campaign at home. She very badly wanted to see the movie; I was equally committed to her not seeing the movie.

At one point, completely exasperated, I demanded of her, “Why in the world would you want to see a movie that portrays the death of children as entertainment?”

Her answer surprised me. “I think, Mom,” she said thoughtfully, “that for a story to really matter, you have to know that the stakes are high. You have to realize that it’s life or death.”

I won’t tell you who won the movie debate. But I found myself remembering Beth’s insight into stories almost exactly a year ago, after I attended my first Ash Wednesday service.

My husband, Mark, and I both came to faith in the sort of evangelical environment where “church calendar” means a list of congregational events and birthdays. We celebrated Christmas, of course, and Easter too—but that was about it. My experience with Advent was limited to chocolate-laden drugstore calendars. Pentecost was for the charismatics down the street. And Lent was a mysterious, rather gothic observance reserved for the Catholics.

It wasn’t until we were well into adulthood that we became more curious about the ancient rhythms of the church. We developed some friendships with folks who were following Jesus in liturgical traditions, and we could see that their observance of certain rituals and seasons was bringing them life. No matter how relentlessly the world of clocks, crises, day-timers, and deadlines marched on around them, they seemed connected to a different rhythm—a more cosmic story that contextualized the chapters in their own lives.

So, slowly, we began to tune our own lives to this alternate rhythm: Advent, Christmas, Epiphany, Lent, Passiontide, Easter, Ascension, Pentecost, and back through “Ordinary Time” to Advent again. This way of marking time continues to evolve for us—we still attend a church that observes only some of these seasons—but whenever we allow the liturgical calendar to calibrate our hearts and minds, we find ourselves plunged a little deeper into God’s story.

We’ve observed the 40-day (plus Sundays) season of Lent for a few years now, embracing various mild-yet-disruptive restrictions (giving up coffee or soda or sweets) in order to destabilize ourselves and expose the toxic little ways we rely on creature comforts instead of the Creator. Our sacrifices in this season are so minuscule as to be laughable, except that our Father seems only too willing to use our tiny offerings as portals for his grace. Every hunger pang or caffeine craving becomes a holy prompt—pray, trust, surrender. The whole season becomes a bit delicious with anticipation: Easter is coming!

Still, for all our blossoming enthusiasm for the gifts of the Lenten season, Mark and I haven’t known much about the observance of Ash Wednesday. If we had once distrusted Lent as a little macabre, Ash Wednesday—the first day of Lent, which some churches observe with a liturgy of penitence and a ritual of ashen crosses—seemed to be the darkest of all possible holidays. And yet, last year, we found ourselves searching web listings for a church in our area with an Ash Wednesday service. I guess we figured that if we were going to do Lent, we might as well show up for the opening ceremonies.

We read about a church offering an evening service in a neighboring town and set about trying to find it on a night both dark and rainy. We got lost, we argued, we considered just heading home and watching the hockey game instead. But, somehow, we managed to persevere, and, wet and grumpy, we snuck into the service 20 minutes late.

We sang a few worship songs. Some Scripture was read. And then came the moment when we were expected to go to the front and allow the minister to place a cross of ashes on our foreheads.

I don’t know where the ashes came from. I’ve heard that churches who observe Ash Wednesday will often save and then burn the branches from the previous year’s Palm Sunday—a practice I find beautifully poetic and deeply mysterious. I hoped my first Ash Wednesday ashes had that sort of back story, but I don’t know.

What I do know is that we went forward, and a man I’d never met before—but who had taken vows to shepherd the likes of me—put his thumb to my forehead, looked me in the eyes, and told me: “Remember that you are dust, and to dust you shall return.”

I had no idea what the proper liturgical response should be. Thanks be to God? And also with you? Amen? What does one say to the proclamation that one is dust? I think I just nodded. I might have mumbled, “Okay.”

The service wrapped up; there was still time to watch the third period of the hockey game. We left our smudgy crosses on our foreheads, and when our teenagers came home and saw us, we chuckled at their bemused mix of awe and chagrin.

“Why on earth would you go to a service just to be told you are dust?” demanded my daughter.

It was only later, drifting off to sleep, my ashes washed off but my skin still tingling in a cruciform pattern, that I realized the answer to my daughter’s question. For a story to really matter, you have to know that the stakes are high. You have to realize it’s life or death.

We Are But Dust

The human story—my story—begins, of course, in Genesis, when God takes a handful of dust, shapes it into a man, and brings him to life by breathing into his nostrils (Gen. 2:7). One chapter later, the first humans have already forgotten where they came from and attempted a coup. God explains to Adam and Eve that their desire for emancipation is really a death wish. Cutting themselves off from him is cutting themselves off from the breath of life. “For dust you are,” he reminds them, “and to dust you will return” (Gen. 3:19).

The story unfolds from there, and from the human side of the plotline it’s pretty bleak—a dusty litany of wars and rebellions as humans orbit further and further away from the One who can breathe them back into life.

But the king of glory is also king of the plot twist, and he comes—made of the same dust as us—in the person of Jesus. Every year in our celebrations of Advent, Christmas, Epiphany, Lent, Good Friday, Easter, and Pentecost, we remember his coming, his enduring, his sacrifice, his victory over death, and the life he offers to us now.

The Gospel of John captures a moment in Jesus’ story that, until very recently, I somehow missed. Jesus has risen from the dead, and his disciples, confronted with the reordering of the cosmos, are filled with equal parts terror and joy in the radiant presence of their friend. I imagine they must have felt like their fear could melt them down to ash, until Jesus exclaims: “Peace be with you! As the Father has sent me, I am sending you” (John 20:21).

Without the breath of God, we are but dust. On the brink of Lent, Ash Wednesday helps us remember the life and death stakes in our own stories, preparing us, in the words of Eugene Peterson, “for a kind of death that the culture knows nothing about . . . making room for the dance of resurrection.”

Thanks be to God.

Carolyn Arends is the director of education for Renovaré as well as a recording artist. Learn more at CarolynArends.com.