The story behind a new, multiethnic journalistic enterprise.
Jessy Shelton 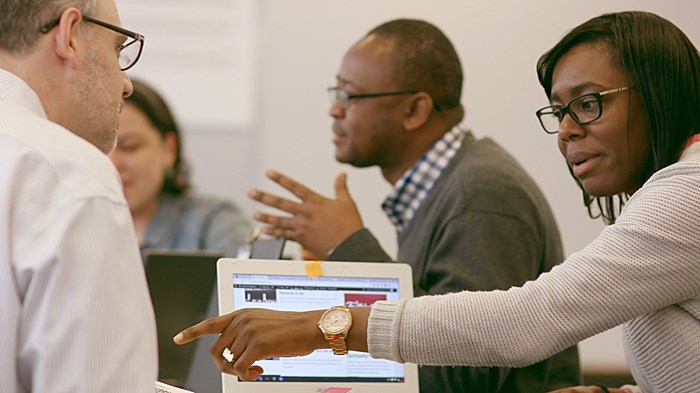 Nicola Menzie has worked in media for over a decade, with staff positions at CBS News, AOL News, and The Christian Post. She’s interviewed some of the biggest power players in American evangelicalism, from T. D. Jakes to Tim Keller. But in 2015, she left that all behind to launch her passion project: a magazine that would center Christians of color.

Initially a digital outlet focusing on minority women in ministry, Faithfully Magazine has since grown to encompass a podcast and print publication that covers everything from depression among African Christians to Trip Lee’s latest album. “I realized there was a gap in the stories Christian news outlets were covering and pursuing,” Menzie says. “Christians of color were rarely featured, unless they were needed to respond to a specific issue.”

With a volunteer staff and only $5,000 in Kickstarter seed money, Menzie has established Faithfully as an exemplar of racial and spiritual diversity and a resource for news, theology, and cultural commentary from a faithful yet ecumenical perspective.

Here, in conversation with CT, she explores what it means to be an ethnically inclusive publication and why Faithfully’s message is needed by believers of all races and denominations.

What is Faithfully all about?

It’s another option for Christians who want to be informed and inspired by the things that Christians of color are doing or creating and the issues that they care about. If you go to the newsstand or bookstore and look at the magazine section, you’ll notice a pattern. If you stay out of the so-called ethnic and music publications, what you find is that 95 percent of the cover stories feature white individuals. They’re the leading stories. When you open the magazine, you’ll find that it heavily leans toward one demographic or look, as well. Faithfully Magazine is doing the opposite of that. We’re asking “What have we been missing from the folks on the margins?”

Are there other magazines for Christians of color that have influenced your project?

Actually, when it came time to figure out the parts of the magazine I thought were important, I looked at historical black publications like Negro Digest, Black World, and Ebony. These publications evolved out of a particular need, when the stories of African Americans weren’t being told in the [mainstream media].

It’s the same thing at Faithfully. Our focus isn’t just on centering Christians of color. People are expressing a need to know how to talk about issues of racial diversity, equity, and justice, so I’m positioning the magazine to meet that need, also.

You have a pretty wide demographic base—black, Asian, Latino, and white readers. How do you bridge all of those communities?

Because we’re not a denominational publication, we’re not tied to any denominational overhead. As the owner, I have my own convictions about what the Bible says, but I don’t feel the need to police around certain issues. Instead, we report on them and allow people to speak for themselves.

How big is your audience?

Our digital readership is 30,000. Our print readership is still growing. Our circulation is at least 400, including subscriptions and single issue purchases.

Tell us about the composition of your editorial team. Given the framing of the magazine, why did you decide to include a white woman on the masthead?

When people hear “Christians of color,” they automatically assume that white people are excluded. That’s a misconception. Faithfully Magazine is not anti-white; we’re ethnically inclusive and centering Christians of color. A majority of our readers happen to be white folks, and the majority of the people who supported us early on through Kickstarter and subscriptions were also white. It makes sense that a staff member would also be a white believer. It makes sense that you’d also have black, Latino, and Asian editors. We don’t want to be an echo chamber, telling stories about what’s happening in black communities to black people exclusively.

That’s really interesting. What do you make of the fact that the majority of your readers are white?

I think white believers have been attracted to Faithfully Magazine because of the times we’re living in, which demand awareness, engagement, and action on numerous issues—like police violence against blacks and other people of color.

The common response I’ve heard from white readers after they received the first issue was that the content focus is “refreshing”—which indicates that they were missing that kind of source from their reading options. I think there’s just excitement among our emerging community of readers for something new and different that also aims to bring consistent diversity to Christian media and media in general. There’s a deep desire to know more about the richness of the diversity of God’s church.

In your first letter to Faithfully readers, you lament the “neglect and marginalization of Christians of color in the media,” citing it as one of the motivations for creating the magazine. Is there a particular story of interest to your readers that mainstream media missed in the last few months? Where are you filling the gaps?

One example that comes to mind is the Southern Baptist Convention’s annual meeting in June. It’s not so much that the mainstream media missed it—they were all over the alt-right resolution—but I don’t think anybody went back to question why the delegates were slow in passing it.

Our cover story for the second issue explores that issue in the context of American evangelicalism. I don’t think the church in America has taken a deep enough look at our role in white supremacy and racism—and I say “our” even though I’m an African American because I belong to the same church, as one body. There’s still disconnect and ignorance when it comes to how we talk about race and deal with privilege and certain ethnicities not having the same access, even within Christian organizations and seminaries and churches.

Tell us about the magazine’s motto, which paraphrases Micah 6:8: “Do Good. Obey God. Stay Woke.”

“Do Good” is what Christians are called to do. We get our definition of what is good by looking at what pleases God. “Obey God” you could call pursuing righteousness or holiness. “Stay Woke” is just equipping ourselves to be aware of what’s going on around us and knowing how to engage when we need to engage.

What motivates you to move forward?

And when you look at the volunteer staff page … no one’s being paid! So, clearly, our work is resonating with other Christians. They believe in the need. That confirms to me that this is something that God is pleased with. That’s my motivation: I’m being obedient in doing what I feel God is leading me to do.

Can you share some teasers for the next issue?

The theme for our third issue, which will be available in late November, is hope, joy, and good news. We’ll offer readers something a bit different from the typical holiday fare. Of course, I’m reluctant to divulge specific stories. Since our first two issues dealt with tough subjects, we are hoping to show the brighter side of things with Faithfully Magazine No. 3.

Join the conversation on Facebook
Tags:
DiversityPublicationsRacismWomen in Leadership
Posted:September 11, 2017