An interview with SEND International’s first female head on missions efforts in our own backyard and abroad.
Interview by Morgan Lee 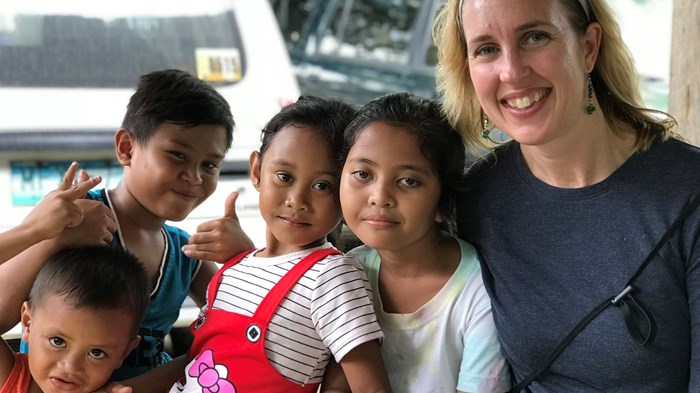 Michelle Atwell was a brand-new Christian when she attended InterVarsity Christian Fellowship’s global missions conference Urbana and dedicated her life to fulfilling the Great Commission. “I didn’t know how the Lord would use that in my life,” Atwell said. “But I made a commitment that I would do whatever he would ask me to do to bring glory to his name among the nations.”

Last year, Atwell became the first female US director of SEND International, a ministry that equips Christians for cross-cultural ministry. As part of her job, she travels around the world and works with SEND’s missionaries, SEND’s ministry team, and regional leaders.

Atwell recently spoke with Christianity Today about the role Russia played in sparking her love for evangelism, why there’s a disparity between the number of women serving as overseas missionaries compared to domestic church planters, and how unreached people groups are arriving in America as refugees.

Where does your passion for church planting come from?

Approximately six months after Urbana, I spent a summer in Samara (a city in southwestern Russia), with InterVarsity doing lifestyle evangelism among Russian students. I lived among Russian students, and with a Russian family on weekends, and picked up some Russian. Through this experience, I developed a heart for what it meant to live overseas and what it meant to evangelize and disciple people.

When I returned home, I thought, I’m going to be a missionary in Russia. But God had other plans. I was a relatively new believer at that time, and I was the only Christian in my family. It would have been very difficult for me to make such a switch like that. So the Lord had me involved in local ministry.

But fast forward, I got married and began raising a family, and the church we were attending started a church plant in Chernobyl. I felt God saying, Here is another opportunity to pursue what you loved to do back when you were a student with InterVarsity. With my church, I began training a team from our church to go to Chernobyl, partnered with a church from Kiev, Ukraine. For five years, we visited the area twice a year and planted churches in villages right outside the exclusion zone [the area most affected by the nuclear reactor disaster].

What has it been like to be the first woman in this role for SEND International?

Mission agencies are grappling with, “Well, is the church going to approve of this?” For example, I had a mission agency ask me, “What was the ramification of you coming on board? What do the churches say?” I was so glad to be able to say that all of the churches that supported us prior to me assuming this role are still supporting us today.

Women, especially single women, are really strongly represented in missions. Why do you think that is?

Gosh, I really don’t have an answer to that. There are a lot of women who love Jesus and who want to go out and make a difference. We are relational by nature, and we love partnerships. In some ways, we’re just wired to naturally share our faith and to live that out in meaningful ways. There are women who say, “I’m not married. How would God use me in ways that I’m passionate about?”

Although there are many single women on the mission field, it’s a lot harder to find female church planters. Why?

Theological barriers are one of the reasons why we don’t see as many women in “church planting roles.” We all share a deep commitment to a high view of Scripture. But there’s a wide spectrum of teaching about what the Bible intends regarding women and an even wider spectrum of how that teaching is carried out in a church-planting role.

At SEND International, some of our best church planters have been women. That’s been the case since the beginning of our organization. We’ve always been on the frontlines of saying, “Yes, we want to send women out as church planters.”

As an interdenominational organization, we have many churches that have many different viewpoints about women in church planting roles. We try not to limit ourselves or define ourselves in one camp or another. We know that the complementarian and egalitarian frameworks affirm the equality of women, but how this plays out looks different in the field.

We know that God has given different giftings to different people. At the end of the day we say, “How do we use your gift and talents to plant churches and make disciples and do that in culturally appropriate ways?”

At an organizational level, there are mixed messages about what it means for women to be in leadership and ministry. Since I’ve come onboard SEND, I’ve asked, “How is it that we send women out on the field in dangerous places, trailblazing, making disciples for Jesus, yet haven’t had the space in the corner office or in the boardroom to help with strategy and leadership?” The issue is complicated. It can be messy. Mission agencies like SEND have to articulate what that means to put women in leadership roles within the organization as well as having strategic roles out on the field planting churches.

Where do you see God working these days that might not be on the average Christian’s radar?

Uzbekistan has new leadership, and the government wants to open its borders and have Westerners, especially, come in and start businesses. They want to learn about religious liberty and freedom. For us as an organization, we are saying, “Wow, in these Central Asian areas that have traditionally been closed to Westerners and particularly Christians, could this be another opportunity where the Lord is opening a tremendous door for us to go and to minister?” Uzbekistan is on our radar. So is Kazakhstan.

There are also many unreached people groups within Thailand. We have a ministry among girls who are at risk of human trafficking. These young girls are actually going back into their villages and sharing the gospel with their families—many of whom live in very hard-to-reach communities.

We’re in over 20 countries in Asia, Southeast Asia, Europe, as well as Alaska and the Yukon Territory, which most people probably would not have on their radar. If you look at those northern areas in the Yukon, there are several tribal villages in hard-to-reach areas that you can only get to by plane.

Tell us about your work in other parts of North America.

Because of the refugee crisis, the United States has the third largest number of unreached people groups. Michigan ranks number 5 in terms of the most number of refugees who have been resettled here in our area. SEND’s headquarters are located here. So it’s exciting for us to be able to take our skills and expertise and say, “We have unreached people groups right here on our own doorstep. How do we begin building relationships and start a church among these people right here?”

We’re doing English language classes right now here in the Detroit area and building relationships with a lot of Afghani and Syrian refugees. It’s a wonderful opportunity to build relationships, get to know these beautiful people who are here, and share the love of Jesus.

Some of the bigger missions agencies in the US are in the midst of a philosophical shift. They’re recognizing that other countries are increasingly sending out their own missionaries, and the US isn’t the missions headquarters it once was. How is SEND reacting to these changes?

Well, we are experiencing this just as the larger organizations are. But we’ve been a multinational agency since we incorporated in 1945. SEND has a commitment to sending people from other nations to the unreached. Over 20 percent of our missionaries are actually sent from other parts of the world.

Today, we’re asking ourselves, “What does it mean to send people who don’t speak English? How can we work that into our structure and create something new? What would that look like to form partnerships with Latin American agencies and understanding how can we work together in mobilization? What can we do to help equip the people that they want to send?”

Right now, for example, we are working in Ukraine to set up a sending agency. Ukrainians want to share the gospel, and they can actually get into countries like Iran without a visa. So we’re trying to figure out how to come alongside Ukrainians to equip and train them so that they can send out long-term workers.

Russia, too, is now saying, “What does it look like for us to set up a sending agency, and how do we begin sending out missionaries?”

How are anti-conversion laws impacting your missionaries around the world?

It’s a reality that we’re grappling with, and not just anti-conversion laws—it’s also challenging to secure visas. These problems have forced us to think innovatively and creatively about how we access sensitive countries while also figuring out how to remain bold in our witness, sharing our faith and being an example to new believers in those areas.