A rap artist reflects on her latest album and what it means to walk away from the “vultures of culture.”
Jasmine Holmes 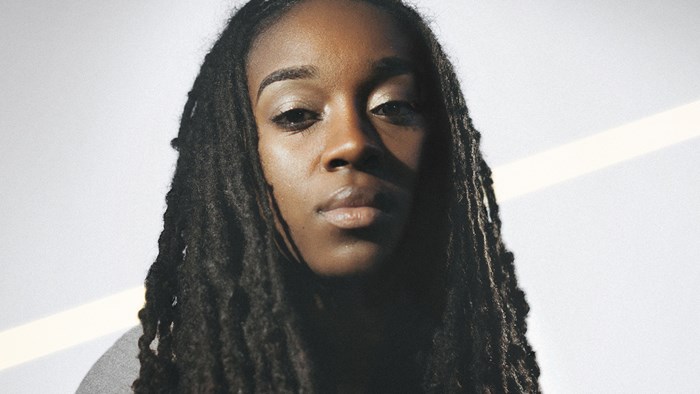 Jackie Hill Perry describes herself as a “rapper, writer, teacher, and poet.” On May 11, just days before the birth of her second child, she released her newest album, Crescendo (Humble Beast Records), a follow up to The Art of Joy. The 14-track hip-hop record reflects her deep evangelical commitment to sharing the gospel through music.

“My love for God and my experience of him gives me a desire for other people to know and experience that,” says Perry. “I do what Jesus did: I keep preaching. I keep teaching. God usually works in the places that we don’t see, so I’m planting seeds.”

CT spoke with Hill Perry right before her due date to discuss the motivation for her latest musical project, why affection for God is key to her faith, and how she responds to critics who disagree with her views on human sexuality.

How do those four aspects of your identity—rapper, writer, teacher, and poet—work together to define who you are?

Ultimately, all of those four things are forms of communication. They’re extensions of the same thing, since everything I do involves language. Whether it’s poetry, rapping, teaching, or writing, it all comes down to, “How can I use the gift that God has given me as a communicator? How can I use that for his glory?” God has allowed me to understand and communicate things uniquely.

Every time you get on stage, you’re proclaiming the gospel. What drives you, exactly; where does the fire come from?

Affection. I have a great affection for the Lord. I want to know him and love him and experience him and continue to grow in him through the church, through Scripture, and through prayer. I see how satisfactory he is and how good he is. If I love others genuinely—their hearts, their souls, their bodies—then it becomes less about me and more about God, because loving them means that I need to get out of the way so that they can get access to the one who loves them best.

I was also raised in black culture where passion is communicated in a way that is different than other cultures, so that’s part of it, too. When I care about stuff, I get loud and passionate about it.

You mention being raised in black culture. How else can we see that upbringing reflected in your album?

In some believers, I’ve seen a departure and a fear when it comes to loving gospel music. There’s a fear that, because it doesn’t have propitiation or atonement or justification, it’s unbiblical. In Crescendo, I wanted to take the time to have interludes that include certain classic gospel songs. For example, I have Swoop playing a version of the song “No Ways Tired” so people can feel what gospel music does to the soul and to the emotions. I wanted this album to introduce people to that or remind them of it.

When I got your new album, I listened immediately to the track titled “Woman.” As someone who previously identified as a lesbian, what has your journey into understanding womanhood looked like?

As a former lesbian, and because of the way I displayed my lesbianism specifically—as a stud who tried to act as masculine as I could—I had a particular challenge when it came to learning how to embody womanhood the way it is described in the Scriptures. I also had to learn how to discern whether people teaching about womanhood were using God’s version or culture’s version. I saw how people were putting their culture into the texts instead of allowing the text to shape their culture.

So for me, it was a lot of hard work to get back to the basics of what God has to say. When I started to actually see my womanhood through the lens of Jesus, it was really helpful. Bending my womanhood to what I see in Jesus changes everything.

You’re on the receiving end of a lot of criticism about your beliefs on sexuality. How do you respond to critics who take issue with your story or your views?

I don’t ever go into these conversations or these spaces believing that everybody would agree with me. That would make me delusional. Scripture has already told me that the gospel is offensive. The gospel is foolish. Darkness blinds the minds of unbelievers. So I go into these spaces knowing that I’m speaking to blind people. But I also go with the encouragement that preaching the offensive gospel is the means that God uses to unblind eyes.

The song “Woman” is for the young women I see who are really influenced by culture more than Scripture, in terms of how their worldview is shaped. I’m saying, “I’m done trying to wrestle with the culture to figure out who I am.” That’s not my job, that’s not what I’m called to do.

At the end of the day, I’m done bartering with a dead thing. That’s why I mentioned vultures. I’m not going to barter with something that’s not rooted in truth. At the end of the day, what I’m going to do is open up this God-breathed Word that God has written to us all, and I’m going to let that define me. Period. I’m done asking all of these questions of culture: “Should I wear dresses? Should I shave my head? Should I get married? Should I be egalitarian?” Instead, I want to know what God has to say about these things.

You mention your daughter Eden in that track, too. As she grows up and gets to know her mama, what are the most important things you want her to know about you?

I hope that she learns so much more about God through me, rather than simply learning things about me. I know the older she gets, she will definitely see a lot of my flaws— I’ve been very cognizant about how trauma still affects who I am. I know it’s inevitable that some of that will rub off on her, but I hope she sees that—even though trauma is still affecting me—I’m fighting for God to renew my mind and renew my behavior and renew those old dead ways that I still walk in. I want her to say that, yeah, “My mother was still broken and still jacked up, but she fought because she loved God.”

Talk about “Lamentations” and the feelings you reveal in the song. How do you balance vulnerability with the proclamation of biblical truth, and what does that look like, exactly?

I think a lot of vulnerability is service to people. I don’t just see it as “let me vent right quick.” I understand that as an influencer, I influence in more ways than one. In that song, I was talking about where I was at that time, and where I often am—which is super aware of my sin to the point of condemnation. I wanted to be honest so that people could understand that there is freedom to be open, not only before God but before man. Because ultimately, I don’t have to prove anything to you.

If there is no condemnation, that is an actual reality that I am able to walk in even as I struggle, even in my brokenness. There’s also balance in knowing that I will not be here in this space forever. I may be here for a day, for a year, or even for five years, but at the end of it all, this depression and anxiety is not eternal. What is eternal is my soul, and it’s going to be bomb one day with Jesus. I have to set my hope on what is going to come eventually in eternity.

Do you have a favorite song on the album? If so, why is it your favorite?

Right now, it’s “Maranatha.” In the song, I talk a lot about time and what it feels like when you’re praying, where you’re seeking God to change certain things, but it seems like his timeline is a lot slower than yours. Specifically, I think about my family members who don’t know Jesus yet, and I’ve been praying for them for a decade. I wonder how long I’ll have to wait for him to move. I feel this frustration knowing that God is sovereign, and yet he still works on his own schedule.

I like this song the most because it’s real. I’m impatient with a God who is not impatient, and I have to trust that he knows what he’s doing. In the end, we’ll see that he was working this thing out all along.

Jasmine Holmes is a Texas native who lives in Jackson, Mississippi with her husband and son. She teaches humanities at a small classical school and attends Redeemer Presbyterian Church. She enjoys writing for a variety of ministries but finds her home at jasminelholmes.com.