Eugene and I spent years serving others. Our giving often multiplied itself in unexpected ways.
Jan Peterson 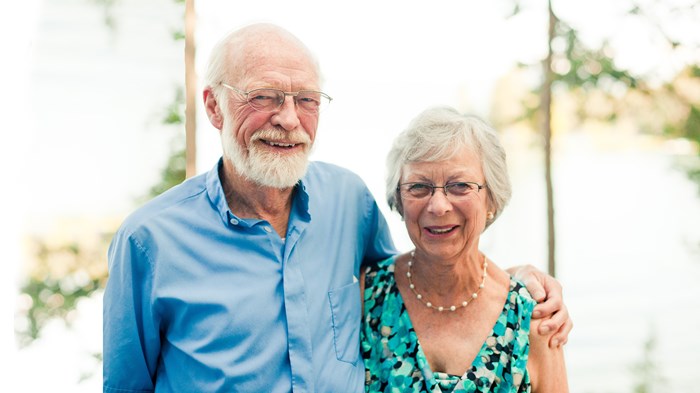 When I was around 13 years old, I discovered the treasure of spiritual friendship through a woman named Gertrude Floyd. Gertrude and her husband were our back-door neighbors. I had recently been confirmed in the Presbyterian church and was involved in youth fellowship, where a lot of kind folks helped me center my life in the Lord. But a good deal of my spiritual growth came from just on the other side of our backyard fence. I often found myself walking through the back gate and knocking on Gertrude’s screen door, where I was always received with a warm welcome and a “Come in—I’ll get us some lemonade. You go on out to the porch.”

Those visits had a profound influence on my life. Even at 13, I was beginning to understand the kind of woman I wanted to be as I grew up: I wanted to be like Gertrude. Her loving friendship showed me how powerful it is to be readily available to others—to listen, to care for them, to engage with their lives.

These years later, I’m well aware that being a pastor’s wife brings with it a lot of demands and a lot of time spent serving others. But the amazing thing about service is that it rarely returns void, even if we don’t see the end results ourselves.

Eugene and I saw this happen in a beautiful way during one particular season of serving. Our friend David and his wife, Janet, were part of our church community. She was our organist. They had a blended marriage; each of them had three children. Tragically, Janet was diagnosed with cancer and passed away, leaving David with all those children to care for. He had a good job and was working in Baltimore, but before Janet died, the company moved to the West Coast. His hands were tied. He couldn’t move his dying wife and kids at that time, so he ended up getting a new job that financially didn’t allow him and the children to stay in their house.

At first, the grandmother took the kids up to Pennsylvania where she lived, but they were very unhappy there. They were used to living in their hometown, and they wanted to be with their father. So my dear, blessed husband said to David, “Well, we’ll take them in.” Two of the children had already left home, so we welcomed the younger four—three boys and one girl—into our home, in addition to our three children. Our daughter, Karen, was 10, and our boys were two and three years younger. It was a houseful. We only had three bedrooms. The whole basement of our house was empty except for Eugene’s workshop and study, so we put the boys down in the basement, and the girl shared a bedroom with Karen.

David’s children were with us for about three months. The septic tank overflowed once, so we carted the kids back and forth to the church to use the bathroom. And I had to fix seven school lunches when we really couldn’t afford to buy lunch for everybody. There I was every morning, preparing all these lunches and getting breakfast for the kids and sending them to the school bus—it was overwhelming. Eugene organized the kids so they helped with packing their lunches.

Here’s what bolstered us in the midst of this busy season: As we were living lives of sacrificial service, the church began to do the same. Prior to taking in David’s kids, Eugene had tried to get people in the church to be aware of others who were going through a hard time. He’d make phone calls, asking for things like meals for new parents, trying to create a community of service. No one seemed to want that sort of community.

But then we took in the children. The church couldn’t believe it. People seemed overtaken by the idea of service—and they started pitching in. People started bringing food to the front door. The deacons said, “We can’t let the Petersons just feed these kids out of their living,” so they started giving us extra money for food. Somebody gave us bunk beds and a cot for the boys. And a family in the church invited David to come and live with them until he could get a place for both him and the kids.

When we had been longing for community, community suddenly appeared. That’s because service creates a community of giving. We never had to make another phone call.

When I think about being a servant, serving in Jesus’ name, I am reminded of a favorite verse from Luke 1:37–38. The angel Gabriel was visiting Mary, telling her she would be the mother of Jesus, “Son of the Highest.” And he also told her about her cousin Elizabeth, who was old and barren but was now pregnant with a son. The angel said, “Nothing, you see, is impossible with God.” And Mary said, “Yes, I see it all now: I’m the Lord’s maid, ready to serve. Let it be with me just as you say” (The Message).

This should be our attitude, as well. Whether we are serving the Lord or serving others in our families and friendships, our service should be unfettered, open, and willing. Just like Mary, we must have the courage to serve where God calls us, which may not be in the ways the people around us expect. And we must be humble enough to accept the love and service of others, just as Mary accepted the love and service of Elizabeth.

May we all have the desire to serve God in that spirit. Fiat mihi—may it be unto me. Amen.

Janice Peterson is the wife of the late author Eugene Peterson and the mother of three. Becoming Gertrude: How Our Friendships Shape Our Faith, her first book, illustrates the legacy of a life of faith and intentional relationship.

This essay was adapted from Becoming Gertrude by Janice Peterson. Copyright © 2018. Used by permission of NavPress. All rights reserved. Represented by Tyndale House Publishers, Inc.