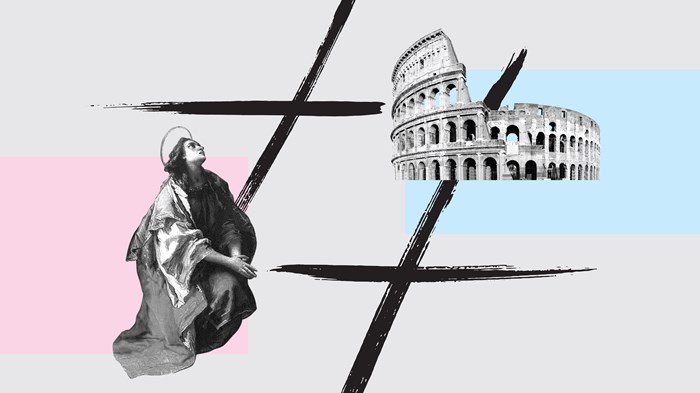 I am a Christian,” declares Blandina, slave woman and martyr, to the Roman authorities. “I am a Christian,” asserts Perpetua to her pagan father, sealing her fate as a martyr. “I am a servant of the living God,” proclaims Thecla to the governor as he marvels at her testimony in the arena before she was to be eaten by wild beasts.

The voices of these female martyrs ring down through the centuries and sound notes of wisdom and encouragement to us today. In our current #MeToo moment, we hear the voices of persecuted women defining themselves not as victims but as agents. We find striking similarities to the ancient female martyrs and ascetics—bravery, willingness to face public shame, conviction that their words are important. But we also discover important differences between today’s ideas and the ancient female martyrs’ views on the ultimate goals of a life well lived.

The martyrdom accounts of women like Blandina, Perpetua, and Thecla reveal women who were extraordinarily bold. They resisted familial pressure and governmental orders to turn from their Christian faith. They unflinchingly testified to Christ, knowing that intense physical torture would be the outcome of their truthful, fearless answer. Their actions and the suffering they endured magnified their voices.

In 177 in Lyons, Blandina, a slave woman, was part of a small group of accused Christians, some of whom recanted their Christian faith—but not Blandina. She outlived all the others, undergoing numerous public tortures including scourging, a roasting chair, and being gored by a bull. The early church historian Eusebius wrote that as she was being tortured,

Blandina was filled with such power as to be delivered and raised above those who were torturing her by turns from morning till evening in every manner. ... They were astonished at her endurance, as her entire body was mangled and broken. ... But the blessed woman, like a noble athlete, renewed her strength in her confession … exclaiming, “I am a Christian.”

Her steadfast faith impressed the crowd who claimed never to have seen a woman bear such cruelties.

From North Africa, Perpetua was a 22-year-old mother of an infant son. She was arrested in 203 because she refused to sacrifice in honor of the emperor and offer an oath of allegiance to imperial Rome. While imprisoned, she wrote a diary of her experience and recorded four visions. In the final vision, she took the form of a male wrestler who fought a fierce opponent and decisively defeated him. The symbolism was clear: Perpetua would face God’s archenemy, Satan, and, in Christ, defeat him. After the vision, Perpetua said, “I knew that the victory was awaiting me.” Her victory was to be a martyr’s bloody death.

Blandina and Perpetua were not bold for their own sake, out of a desire for self-affirmation, the promise of fame, or a moment in the spotlight. Their boldness was for Christ and for the sake of others. They sought to encourage their brothers and sisters in Christ, many of whom also faced hideous torture and death in a gruesome spectacle. Perpetua led a small band of prisoners and incipient martyrs by encouraging them through her four visions that confirmed they would face the beasts and would win an eternal crown. After she was wounded by a bull in the arena, Perpetua told her fellow prisoners, “Stand fast in the faith, and love one another, all of you, and be not offended at my sufferings.”

Blandina, too, encouraged her fellow Christians. The narrator of Blandina’s martyrdom states that as she was raised up on a stake, Blandina appeared to be hanging on a cross. Her fellow martyrs looked at her and saw Christ in his passion. Her example “inspired the combatants with great zeal,” reminding them “that everyone who suffers for the glory of Christ has fellowship always with the living God.”

Alongside their boldness, the female martyrs valued modesty as part of their Christian testimony. The modesty they embodied goes beyond our understanding of modesty today (which is often focused on clothing styles). They demonstrated personal agency—choice—by acting in modest ways and speaking in modest tones. For some, this Christian modesty was expressed through an ascetic life that disdained fancy clothes and hairstyles, sumptuous food, and luxurious homes. In contrast to these marks of honor and prestige so highly valued by Roman society, the second-century martyr Thecla and the fourth-century believer Macrina both embraced modesty in the form of asceticism as a testimony to the resurrection life to come in Christ.

The life of the earliest female martyr, Thecla, is recounted in The Acts of Paul and Thecla (an apocryphal text with questionable historical accuracy). This story paints a compelling picture of a young, wealthy woman who rejected marriage and embraced virginity. Twice men tried to pull her violently from her ascetic life, but she boldly accepted possible martyrdom rather than forgo her commitment to her Lord. Why would she cling so tightly to her virgin lifestyle? Not because she was prudish or hated her body. Quite the opposite: Thecla believed that the ascetic life was a fully embodied life that demonstrated the hope of resurrection to a watching world. Christians claimed that the body would be raised imperishable. This meant that in the next life, they would enjoy their raised bodies—bodies that did not procreate nor desire false loves.

Macrina, the fourth-century ascetic and sister to Gregory of Nyssa and Basil the Great, had a secret name given to her by her mother at birth: Thecla. And Macrina followed her namesake along the ascetic path. Gregory tells her story in his Life of Saint Macrina and in his treatise, On the Soul and Resurrection. From a wealthy family, Macrina was betrothed to marry and carry on the family heritage. Her fiancé died before the wedding, and she chose to remain a virgin and live an ascetic life.

While traveling to be with her at the end of her life, Gregory had a vision three times in which he held brightly shining relics. He did not know how to interpret this vision until he was at his sister’s side. There he realized that the vision meant Macrina was, in fact, a martyr and he was holding her shining relics. Gregory explains that in her life Macrina had truly died to sin, and the Holy Spirit shined brightly from her. Though Macrina was not executed for her faith, her countercultural asceticism can be seen as a form of martyrdom.

Rather than valuing that which is passing away—wealth, leisure, social prestige—these ascetics point us toward that which is undying and incorruptible. Gregory described the asceticism of Macrina and others in her community this way:

For just as souls are freed from their bodies by death and at the same time liberated from the cares of this life, so was their existence separated from these things, removed from all of life’s vanity. … Self-control was their pleasure, not to be known was their fame, their wealth was in possessing nothing and in shaking off all material surplus, like dust from the body. … Their only care was for divine realities.

These two seemingly contrary qualities—boldness and modesty—are brought together in the martyrs’ lives. What keeps these qualities from spinning apart is the martyrs’ devotion to Christ and overarching conviction regarding the resurrection of the body. It is for this resurrection truth that they boldly speak and willingly die, for death has no real hold over them. And it is because the earthly body is being transformed and will be “raised imperishable” and be made eternal (1 Cor. 15:52) that they embrace a modest, self-disciplined, self-restrained lifestyle.

What We Can Learn

What can the ancient female martyrs and ascetics teach the church today? In our era in which women are raising their voices and testifying to their inherent self-worth, what can we learn from the selflessness, modesty, and conviction of these early Christian women?

Read more about these women in the following ancient sources:

• Learn more about Thecla in the apocryphal text The Acts of Paul and Thecla (also available online).

• Blandina’s story is recorded by Eusebius in book 5 of Historia Ecclesiastica (Church History).

• You can read much of Perpetua’s experience in her own words via her prison diary, The Passion of Perpetua and Felicity (also available online).

• Macrina’s brother Gregory of Nyssa recounts her story and her beliefs in The Life of Saint Macrina and On the Soul and Resurrection.

We see this eternal perspective revealed in the martyrs’ countenances as they faced execution, such as Blandina who was “glad and rejoicing in her departure as if called to a marriage supper, rather than cast to wild beasts.” We see it, too, as Perpetua, Thecla, and Macrina denounced the power and prestige that came with their wealth. The latter two embraced their celibate lives as allowing them to participate in Christ, foreshadowing the life to come. Their stories prompt us to consider: Do we speak about the dangers of wealth, the value of self-discipline, and the virtue of singleness for Christ as all trumpeting the values of Christ’s kingdom? How could turning our focus toward the eternal give us a greater perspective on the here and now?

The female martyrs and ascetics also remind us that the church has long held up women as exemplars for both men and women to follow. #MeToo is not only about women speaking but also about women being heard. One message of the #MeToo movement is that the female “victim” will not submit to such treatment anymore. She calls the perpetrator to account. In this sense, #MeToo could be paired with men saying #ImListening. The female martyr had a voice, and men listened to it. Christian men and fellow martyrs believed her testimony. They asked for her prayers. They acknowledged her visions and submitted to her words as from the Lord. They saw a female martyr as they did a male martyr—as someone who had a special relationship with the Lord due to her intense trial and torturous death.

Yet the female martyrs and ascetics go a step beyond the #MeToo movement by testifying to an eternal truth: resurrection life in Christ. The martyrs tell women today to love our bodies as signs of the future resurrection. They encourage us to think about what is temporary and passing away and to cling to what is eternal. The martyrs usually gave up economic security and social honor. The female slave martyrs shocked the pagans who could not believe people from the lowest class could have such strength of character. Whether you are rich or poor, have social honor or are at the bottom of the social ladder, the martyrs can show you how to use your position for Christ’s honor.

Today, the #MeToo movement confronts men and women in the church with a powerful testimony. They stand in a long line of women giving witness. The church remembers Thecla, Perpetua, Blandina, Macrina, and many others because they pointed to Christ and called others—men and women—to follow, faithfully taking up their cross, that they might gain the resurrection.

Lynn H. Cohick, PhD, is provost/dean of Denver Seminary. A New Testament scholar, she writes on women in the early church and on the letters of Paul.

Editor’s Note: This article is part of our CT special issue focused on women raising their voices. In “Heard,” we explore how women are speaking up, not only in response to scandals or injustice, but also more broadly for the sake of the gospel and the values of Christ’s kingdom. Click here to download a free digital version of our special issue.