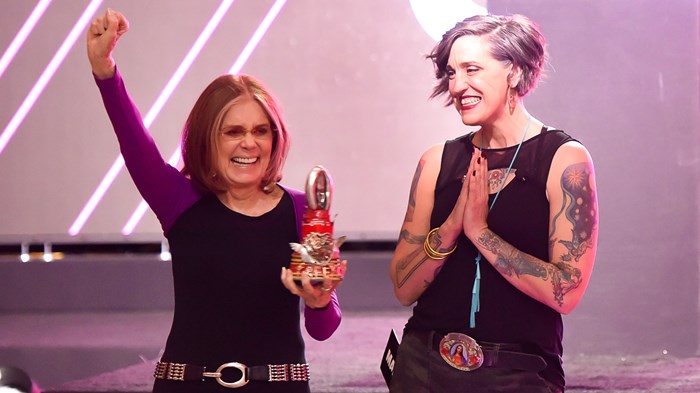 In case you haven’t heard, Nadia Bolz-Weber recently commissioned a statue of a vagina. She gifted the statue to Gloria Steinem, who I hope put it on her mantle (though in a pinch, it could also double as a paperweight or spoon rest). The sculpture exists in part to promote Bolz-Weber’s new book, Shameless, and in part as a kind of performance art protest against the damage done by “purity culture.” She invited women to mail in their purity rings—in exchange for a “certificate of impurity”—and then melted them down to form the statue.

Bolz-Weber’s statue has been applauded by some as an artistic celebration of female sexual liberation. Her critics, by contrast, bring up the authority of the Bible, the Christian call to repentance, and the need to distinguish destructive parts of “purity culture” from basic Christian sexual ethics like chastity and marital fidelity. Others take issue with the icon itself as a fertility idol (or at least a sex idol, since I’m assuming this statue is on the pill). A few less-helpful critics responded essentially, “Eww. Vagina art! Icky!”

However, long before Bolz-Weber’s book tour and the ensuing debate, Christians have been making yonic art. (Yonic, by the way, means vagina-shaped, or technically vulva-shaped. It’s the feminine counterpart to phallic.)

You want vaginal imagery? The church has you covered. Some early baptismal fonts (starting in about the 4th century) were quite intentionally yonic. The Baptistery of Jucundus in Subetula, Tunisia and Vitalis’ Baptistery (also in Tunisia) are two that look particularly vaginal, but there are a handful of others that art historians and theologians point to as yonic or at least “womb-like.”

These yonic fonts are at once delightfully weird, pro-female, and profoundly theological. And, of course, I love to imagine that ancient Tunisian Christians could say, “Our pew is on the right, three rows behind the giant vagina.” (It’s worth noting that baptismal “lady parts” are still used in churches today. A friend of mine currently pastors an evangelical Reformed church in Kansas City whose gorgeous baptismal trough is purposefully shaped like a vagina.)

The inspiration for these ancient art forms came from the Gospel of John. Jesus tells Nicodemus that “no one can enter the kingdom of God unless they are born of water and the Spirit” (John 3:5). Early Christian architects and artists (together with pastors and theologians) drew on this imagery and wanted baptism—this new birth in water and the Spirit—to look like actual birth, a literal emersion from a birth canal. These yonic fonts symbolize new life in Christ and birth into New Creation.

No reasonable person could say that these Christian yonic symbols indicate that the early church was a bastion of feminist liberation. In the ancient church, as now, misogyny abounds. Still, at the very least, they show that the female body was not (and is not) deemed dirty, unholy, or otherwise bad. The ancients apparently were not only comfortable with the reality of female anatomy but considered it sacred enough to actually fuse it with their very sacraments. The only way to enter the church family was through that particular vagina.

Both Bolz-Weber’s statue and early church yonic fonts remind us of the sacred beauty of female sexuality. Both seem transgressive in their own way. But the aim of ancient ecclesial art forms is not transgression but transformation, the radical obedience made possible by grace alone. In this way, yonic fonts provide an almost photo-negative image of Bolz-Weber’s vagina statue. At their core, these fonts proclaim the very good news that we—male and female alike—are no longer our own because we are raised to a new kind of life: We belong to Jesus and to his global church.

Bolz-Weber said that her sculpture declares, “This part of me is mine and I get to determine what is good for it and if it’s beautiful and how I use it in the world.” By contrast, fonts of baptism (whether vagina shaped or not, although it’s cooler when they are) are always symbols of anti-autonomy—a rejection of self-constructed morality. They remind us that, if we are baptized, Jesus calls the shots about morality and the right use of our bodies.

I didn’t grow up in purity culture nor did I “kiss dating goodbye” (though I have friends who did). My parents, thank God, wouldn’t know what a “purity ball” is. (Once in college, my mom told me I needed to drink a little more and have more boyfriends, so any repression I have is purely self-made.) I grew up understanding that in Christian ethics, sex is good, and that sexuality (including female sexuality) is beautiful and to be celebrated. But I was also taught that chastity and celibacy are good and that sex is necessarily covenantal.

When we have sex, our bodies are enacting a promise—two are becoming one flesh. That mysterious conjoining and fusing is a physical embodiment and sign of the covenant of marriage. It’s set up so that the person you sleep with is the one you do your taxes with and celebrate anniversaries with and struggle through long, dark years with and fight over the thermostat with, til death do us part.

Bolz-Weber’s book argues rightly that legalism can shame women about sex and also that double standards regarding men and women’s sexuality persist in parts of the church. But she throws out the baby with, in this case, the baptismal water, by rejecting robust Christian sexual ethics and instead offering a thin vision of sex as merely the consensual, mutual fulfillment of two people.

In Anglican baptisms, we take vows, much like at a wedding. We first renounce the devil and all spiritual forces of wickedness, then “the empty promises and deadly deceits of this world which corrupt and destroy the creatures of God,” and finally “the sinful desires of the flesh that draw [us] from the love of God.” We promise to turn to Jesus Christ as our Lord and Savior, to “joyfully receive the Christian Faith, as revealed in the Holy Scriptures of the Old and New Testaments,” and to “keep God’s holy will and commandments, and walk in them all the days of [our] life.”

The waters of baptism initiate us into a life of obedience to the God of love and mercy revealed in Scripture. It’s not a pearl-clutching, prudish, body-denying, shame-fueled kind of religiosity (that Bolz-Weber rightly protests), but neither is it a life of progressive-style sexual liberation. It is a life of painful redemption, of unrelenting, transformative grace that teaches us to repent and sets us free from sin to be born again and again and again and again and again into new life in Christ.

Tish Harrison Warren is a priest in the Anglican Church in North America, a member of The Pelican Project, and the author of Liturgy of the Ordinary: Sacred Practices in Everyday Life.